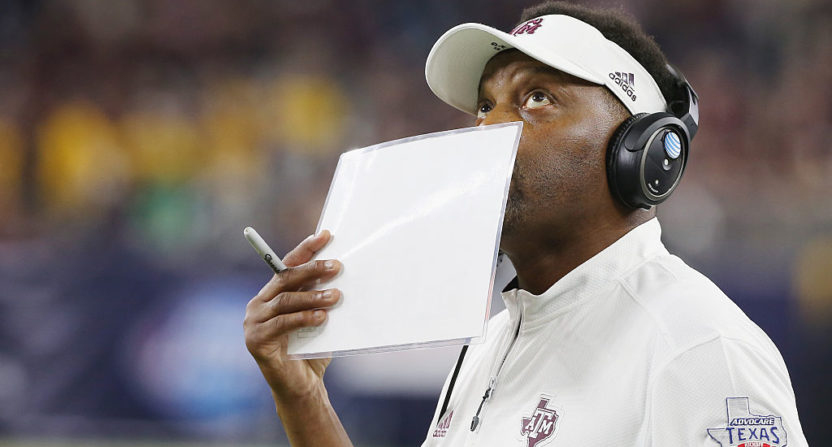 When it comes to big time college athletics, especially big time college football, especially SEC football and/or college football in Texas, stories abound of power struggles between boosters, coaches, administrations, and other forces. Consider the contract extension Kevin Sumlin signed after just two years in College Station, having gone 11-2 and 9-4, that upped his salary to $5 million per year.

Sumlin hasn’t won 9 games since, having delivered three consecutive 8-5 seasons. That’s not exactly the kind of return you like to see when you’re paying your coach one of the highest salaries in the sport.

Former Texas A&M athletic director Eric Hyman knows this, and he takes responsibility for it in an interview with the Fort Worth Star-Telegram, but Hyman also mentions something that sounds almost unbelievable: the contract was written up without his knowledge.

Was That Contract Hyman’s decision?

“No. I had nothing to do with it,” Hyman told me in an interview on Wednesday morning at a Starbucks near his home in Fort Worth.

“I have done this job a long time and I don’t blame Kevin Sumlin. If someone is going to give you $5 million a year for six years, it would have been stupid of him to turn it down,” Hyman said. “But the contract was given to me, and it was ‘This is what we are going to do.’ I looked at myself and I was stunned.

“When the original contract was given to me, if Kevin were to leave the next day there was no buyout provision.”

Again, Hyman isn’t exactly abdicating responsibility here; earlier in the story, it’s noted that he considers any contract signed on his watch to have been “his fault”, if it didn’t work out. But think about that; the school’s athletic director is being cut out of the process for the school’s (and one of the nation’s) most visible coaching positions. That goes a bit farther than the general narrative of a shadowy cabal of boosters meeting in back rooms to raise concerns or back up a money truck when the school needs it.

Hyman’s theory on why Texas A&M board members would make that kind of decision, and cut him out of the loop entirely, boils down to one pretty reasonable assertion: they’re morons.

But why would A&M give Sumlin such a deal when there was no need?

“Because people didn’t know what they were doing,” Hyman said. “I learned this valuable lesson when I was at VMI (Virginia Military Institute), what the 12th Man Foundation is, or the Frog Club, or whatever.

“I learned this as a young, 33-year-old athletic director: VMI people are brilliant. They come to a meeting in a three-piece suit and they leave their brains at home. There are some schools that are more than that; A&M, to a certain extent, had more people like that. They would say things and do things that are mind-boggling.”

(Let’s pause for a moment to note the poetry in that three-piece suit burn. That’s so good, and applicable to just about any corporate station.)

Of course, this has renewed relevance, since an A&M Board of Regents member called for Sumlin’s firing in the immediate aftermath of their season-opening collapse against UCLA. If that’s truly where the power lies in College Station, no vote of confidence from the athletic director is going to help assure Sumlin of his position.

In the end, Hyman’s story is another example in a long history of examples illustrating that money is the cause of, and solution to, all of college football’s problems.