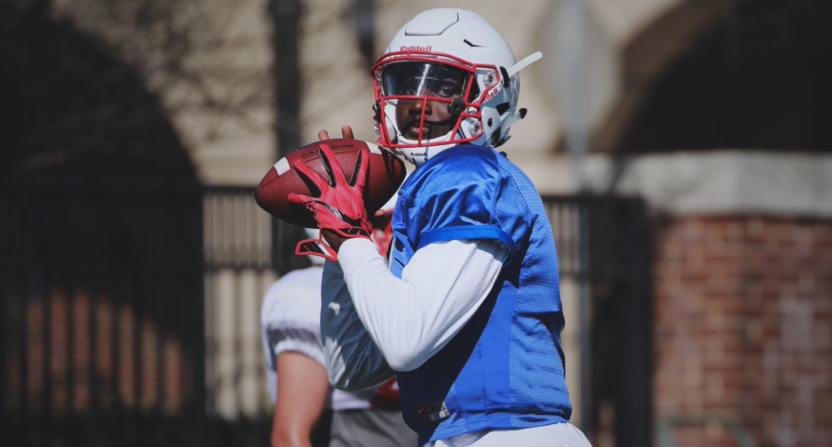 Fresh faces aren’t just for the coaching staffs around the American Athletic Conference these days. In fact, the new faces coming into the programs over the last few years may well be the groups that define the very future of said new coaches. Which faces are the ones you need to know heading into the 2017 season?

Let’s take a look at five incoming transfer or freshman players who could have a major impact right away.

At one point, D.J. Gillins was one of the most sought-after quarterback recruits in the country. He was supposed to be a game-changer for what Gary Andersen was going to do at the University of Wisconsin. Then Andersen left and the offense reverted back to a pro-style look and Gillins’ skills were no longer needed.

After one season at Pear River Community College in Mississippi, it’s clear that the talent is there for Gillins to be successful at the FBS level. So much so that Gillins was seeing a lot of attention coming his way while at the JUCO level. He was 18-of-29 for 165 yards passing, but suffered a season-ending knee injury. He’s healthy and ready to compete now.

SMU picked up his commitment in December and with a mediocre first season for freshman quarterback Ben Hicks, Gillins is going to have every opportunity to be an impact player for the Mustangs. We’ve all seen just how big a dynamic option at quarterback is in Chad Morris’s offense, and Hicks doesn’t have the other dimension to his game that Gillins has.

He’ll at least get every chance to win the starting job and is a name to watch heading in to the fall.

For all the other names on this list, none come into the 2017 season as highly regarded as Potts does for the Cincinnati Bearcats. In fact, he is likely to be the cornerstone of the defense that Luke Fickell is looking to build in his first head coaching gig.

That’s because he comes to the Bearcats as a four-star prospect and the No. 26 ranked safety in the country according to 247Sports. He also was the No. 4 player in the underrated recruiting area of Indiana.

Getting his commitment was certainly impressive, especially since it came so late in the process. Cincy beat out a who’s who of Midwest recruiting powers including the likes of Notre Dame and a host of Big Ten schools.

With the Bearcats defense needing a few extra pieces to take a step up in conference play, Potts is a nice cornerstone for the future of Fickell’s program. He just may not see the field in 2017, as there is depth at the position and that may be best for the future. However, he may just be too good to not get any playing time.

Offensive linemen may not be the sexy names in a recruiting class, but when you nab a player like Obinna Eze inside the American Athletic Conference, it is worth taking notice. Memphis has seen a sustained level of competitiveness it hasn’t had in decades (if ever) and a key to maintaining that is up front on both sides of the ball.

Eze is a four-star recruit out of Nashville, Tenn. and the No. 21 ranked offensive tackle in the country. There’s no doubt he’ll be the building block of the offensive line for the future. He also was the lynchpin of the best overall class in school history and one of the best non-Power 5 recruiting classes in the country.

He’s got some technique work to do, but so does just about every offensive lineman coming in to college. The base is there and it will be interesting to see how quickly he fits into a pretty solid offensive line group already.

If the name of Torrance Gibson is a familiar one to you, then you remember the year 2015 and the hype surrounding one of the best high school quarterbacks in the country. Fast-forward two years and things haven’t exactly gone as planned for the one-time five-star recruit. Instead, he redshirted, spent an offseason learning all about wide receiver play and was suspended by the university for some still unnamed reason.

What was Ohio State’s athletic loss appears to be former OSU defensive coordinator Luke Fickell’s gain as he takes over the Bearcats program. At the core of his program will be the stout defense he is known for and the power-run spread offense that Urban Meyer has nearly perfected at Ohio State. In order to accomplish that goal, Meyer needs a true dual-threat quarterback and Gibson, who finished off an associates degree this spring, fits that bill. The dude can flat out run and a look at the 2016 OSU spring game should suffice.

Sure, there are questions as to his ability to be a collegiate quarterback, but when putting together a brand new look on offense, have the potential that Gibson possesses is going to be huge. Either he is the answer or a flop, but either way Gibson is going to be a name to watch in the AAC in 2017.

How do you get a power-spread attack going quickly? Well, as we highlighted above, you need to have the right kind of quarterback in place. You also need to have a running back capable of getting the job done as well.

Enter Michael Warren of Toledo, Ohio (Catholic Central). With not much in the way of depth or talent at running back returning for the Bearcats, Warren, who was the No. 29 ranked running back in the 2017 class, will have plenty of opportunity to be successful early on.

At 5-foot-11, 200 pounds in high school, he has the body that should be college-ready after a few months in the weight room. Oh, and did we mention he was the Gatorade Player of the Year and Mr. Football in Ohio too? That’s some serious firepower coming to Cincinnati.

As you can see, Fickell’s hire has changed the game of Cincy recruiting and getting Warren in the fold was a huge help towards turning things around quickly. Having a North-South runner to pair with a player like Gibson and you have the makings of what needs to happen to be successful in the power-spread offense.

Will it happen as quickly as we think? Only fall camp will answer the questions we all have, but Warren is certainly a name to pay attention to out of this recruiting class.