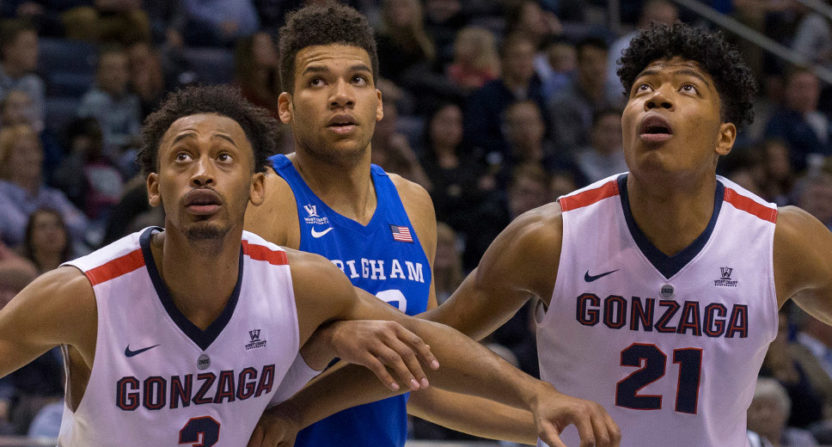 The West Coast Conference might be on the verge of losing a couple of its basketball powers, and the Mountain West Conference could be the one to swoop them up. Mark Ziegler of the San Diego Union-Tribune wrote Wednesday that Mountain West commissioner Craig Thompson has confirmed Gonzaga is amongst the six schools he’s had expansion conversations with:

Mountain West Commissioner Craig Thompson on Wednesday told the Union-Tribune he has held discussions with Gonzaga about leaving the West Coast Conference for the Mountain West, perhaps as early as next season.

“Since August,” Thompson said, “I have spoken to six university presidents and/or athletic directors that have called inquiring about whether we are going to expand, and the Zags are one of them.

Gonzaga might not be alone, either. Thompson said BYU was not among the other schools that have contacted him about expansion, but several sources indicated that BYU — which went independent in football in 2011 and plays in the WCC in most other sports — would consider a return to the Mountain West at least in basketball if Gonzaga joins.

This is interesting on a couple of levels. First, Gonzaga has long been discussed as possibly looking to exit the WCC, given the much greater success they’ve found in basketball than many of the schools they share the conference with (the Bulldogs have made every NCAA tournament since 1999 and made it to the national championship game last year), but their lack of a football team (making them not that desirable for many conferences) and West Coast geography (making them a poor fit for many Eastern basketball-focused conference) have proven hindrances to some of that discussion. But the Mountain West is certainly a geography fit (it stretches slightly further east than the WCC, but not all that much), and it has some tougher basketball competition that might help toughen up Gonzaga’s regular-season schedule and boost their RPI. And it’s particularly notable that BYU (seen above in a Feb. 24 game against Gonzaga) might follow.

While it’s maybe a little surprising that the conference would look at bringing in a school that doesn’t have football, they do currently have two schools that are only associate members for one sport (Hawaii in football and Colorado College in women’s soccer), and this could be a particularly smart addition. Adding Gonzaga and possibly BYU would likely be a big basketball boost for the MWC in terms of teams getting to and making runs in the NCAA tournament, which could bring the conference more revenue to distribute. And this could work out for regular-season television purposes, too; the Zags and Cougars would bring some more desirable basketball matchups to the Mountain West, and with its CBS and ESPN contracts set to expire after 2019-20, the conference might be able to strike a better deal in the next round of negotiations if it had a stronger inventory.

This is far from a certainty, of course. These are just “exploratory” conversations, and Thompson mentioned that he’s had conversations with lots of schools. And maybe Gonzaga is just using this to try and strike a better deal for a larger share of the WCC revenues given their dominance there, and maybe they’ll decide to stay in a basketball-focused conference instead of opting to leave for one like the Mountain West where football also plays a big role. But it’s certainly notable that Gonzaga-Mountain West conversations are happening, and that BYU is in that discussion as well. We’ll see how it plays out from here.