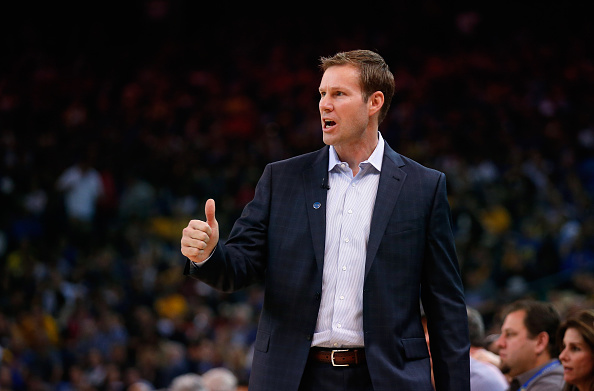 The college basketball hiring season is almost over. As of Tuesday night, virtually every major conference team has a head coach. St. John’s is the lone holdout after being rejected by Loyola-Chicago’s Porter Moser.

Here’s how we grade the new hires:

Congratulations! Your school just got faster.

Don’t blink. You might miss the action. Under Oats Buffalo was 13th in nation in pace of play.

Can Oats have success at Alabama where basketball is often an afterthought? The Crimson Tide have won the SEC just twice since 1987, and their last memorable team was the squad that had a shocking run to the 2004 Elite Eight. Oats doesn’t have any SEC connections so this will be brand new territory for him.

Name another coach who would celebrate shirtless.

There’s a lot to like about Musselman. He built Nevada into a 2018 Sweet 16 team and a preseason top-10 squad. He did so by aggressively mining the transfer market and finding the right players to fit his program. Musselman also has NBA experience, having coached the Golden State Warriors (2002-2004) and Sacramento Kings (2006-07). Pro experience can be a significant selling point with recruits.

Given his West Coast background, it was surprising that Musselman didn’t land at UCLA. Credit Arkansas for getting its man. He’s entertaining, but can he win? Since Nolan Richardson left, the Razorbacks have gone through three coaches (Stan Heath, John Pelphrey, and Mike Anderson) with lukewarm results. The program hasn’t been to the Sweet 16 since 1996.

Congratulations! Your school just got closer to the median.

Straight out of central casting: this guy looks like your basic coach.

This might be the most lukewarm hire in recent memory. Mark Fox isn’t terrible. He’s a replacement level coach who can get you to respectability. And right now, California will embrace that because it needs to show it’s a credible program. The Golden Bears (8-23, 3-15) were terrible in a terrible Pac-12. Their scoring margin (minus-8.6) was the worst among major-conference teams. Pushing Wyking Jones out after two seasons (16-47, two last-place Pac 12 finishes) was a move that had to be made. Replacing him with Fox seems like a stopgap move. Perhaps California’s shaky finances limited an already small pool. Fox was great at Nevada (123-43) but unremarkable at Georgia (163–133). He could get the Bears to a winning record and maybe eventually an NCAA tournament berth. Anything more is wishful thinking.

After being rejected by South Carolina’s Frank Martin, the Bearcats didn’t go too far to find Mick Cronin’s replacement. Brannen was just across the Ohio River at Northern Kentucky. Brannen might not even buy a new house. Heck, Cincinnati played its home games at Northern Kentucky in 2017-18 while its own gym was undergoing a renovation.

This seems like an ideal match for both parties. At Cincinnati, you needed someone somewhat familiar with the challenges and culture. Brannen knows the recruiting hotbeds nearby in Ohio, Kentucky, and Indiana. He’ll also give the program a fresh look. Cronin was a Bob Huggins disciple. Brannen has his own philosophies that helped Northern Kentucky reach the 2017 NCAA tournament in its first season as a full-time Division I school. It had previously been Division II. NKU made the tournament again this past season.

Congratulations! Your school just got handsomer.

This is indisputable. Look at this dude.

This is a tremendous move. Hoiberg might have been a failure as an NBA coach (.426 winning percentage with the Bulls) but he was terrific in college (.673 with Iowa State). He guided the Cyclones to the 2014 Sweet 16 and was a No. 3 seed in the 2015 NCAA tournament before getting upset by UAB. Hoiberg has already impressed with his staff which includes former head coaches Doc Sadler (Southern Miss and Nebraska) and Bobby Lutz (Charlotte).

Nebraska is one of the toughest major-conference jobs in America. It was difficult when the Cornhuskers were in the Big 12. It’s even more rigorous in the Big Ten. The program hasn’t been in the Big Ten long enough to build any meaningful tradition. And Nebraska doesn’t produce a lot of Division I basketball players.  But Iowa State was in a somewhat similar situation. Hoiberg looks like he’ll be able to draw talent from outside the state, including transfers. The Cornhuskers should be significantly improved.

Congratulations! Your school just got sweatier.

Have you seen this man perspire? He’s rivaled only by Auburn’s Bruce Pearl and Sean Miller. Toss him a towel.

This was the worst secret in college basketball. Pretty much everyone knew that Texas A&M was going to hire him. Williams re-energized Marquette (two Sweet 16s and an Elite Eight) and Virginia Tech (one Sweet 16). He might be an upgrade over Billy Kennedy, but it’s not like Kennedy did a bad job (two Sweets 16s in seven seasons). And Kennedy coached through Parkinson’s disease. Pushing him out just felt wrong. Williams will look to take advantage of Texas A&M’s rich financial resources to turn the school into a power. He also brings a style similar to Virginia. The Hokies played at the ninth-slowest pace in the country.

Congratulations! Your school just got more nostalgic for Ben Howland.

Ben Howland! Remember him? Got the programs to three straight Final Fours before the school decided that wasn’t good enough. Fun times.

Cronin wasn’t the first, second, or third choice. And after 100 days of the job being open, you’d think the Bruins would’ve had a smoother hiring process. Instead, they operated like a clown show with Dan Guerrero leading the circus. UCLA laughably whiffed on John Calipari, Rick Barnes, and Jamie Dixon. Because of those misses, the Bruins settled for Cronin, who has no West Coast ties and is 6-11 all-time in the NCAA Tournament.

At Cincinnati, Cronin rescued a program in 2006 that needed an identity post-Bob Huggins. The Bearcats went 89-18 over Cronin’s final three seasons. The biggest knock has been his lack of NCAA success – only one Sweet 16 trip (his UCLA predecessor Steve Alford reached the Sweet 16 three times).

Let’s bring in someone from the NBA because that’s worked so well in college.

The recent track record of former NBA guys with no previous college coaching experience is bad. This offseason alone: Chris Mullin (St. John’s), Avery Johnson (Alabama), and Mike Dunleavy Sr. (Tulane) were all forced out. We still don’t know about Patrick Ewing (34–29 in two seasons at Georgetown) and Penny Hardaway (22-14 in one season at Memphis), although Memphis is expected to be a preseason top-25 team this fall.

Stackhouse’s coaching experience consists of working in the NBA G League’s. That is absolutely, positively nothing like coaching in college basketball where it’s all about recruiting. Vanderbilt went 0-18 in the SEC and will take a 20-game losing streak into next season. Stackhouse must compete in a league with established coaches who have been to the Final Four like John Calipari, Bruce Pearl, Tom Crean Ben Howland, Frank Martin, and Rick Barnes. Good luck.

A Virginia native who is 55 years old? He might stay a while.

Mike Young is Virginia Tech’s fourth coach since 2012. If his team is reasonably competitive, chances are he’ll be there for the long haul. Young stayed at Wofford for 17 years. He didn’t have a winning record until his seventh season and didn’t make the NCAA Tournament until his eighth year. That kind of patience was finally rewarded this past season when the Terriers went 30-5, winning an NCAA Tournament game and finishing the year ranked in the Associated Press poll.

The ACC is brutal. Virginia Tech is at best a second-tier program. But that likely means plenty of patience for Young – and he’s used to that.

Former coach Ernie Kent (.372 winning percentage in five years) wasn’t good, but at least we’d heard of him. Who is this guy? Well, Smith coached at San Francisco the past three seasons. Before that, he was at Columbia for five years. San Francisco went 21-10 with wins over California, Stanford, and Saint Mary’s. That’s not awful. But to be successful at Washington State, you must be special. It’s one of the worst Power 5 jobs in the country. The only guys to have success there were Kelvin Sampson and Tony Bennett. This seems like Mission: Impossible for Smith.