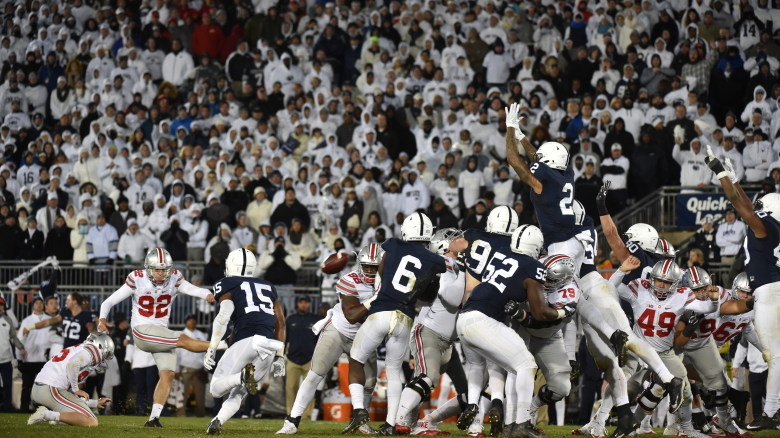 The Big Ten officially closed the doors on all fall sports activity on Tuesday, following days of rumors and speculation and debate around the conference. Although the Big Ten left the door open to potentially playing a football season in the spring, it seems a handful of schools are not ready to punt on the possibility of playing football this fall.

When pressed by Big Ten Network anchor Dave Resvine about the possibility a Big Ten member would pursue participating in the college football season in the fall as an independent or with another conference, commissioner Kevin Warren deflected away from providing a concrete “yes” or “no.”

Given the headlines from around the Big Ten in recent days, it seemed apparent there was some strong desire to find a way to play football games this fall with or without the Big Ten schedule. Ohio State and Nebraska reportedly seemed to be the most vocal about the possible scenario. When asked about the voting breakdown from the Big Ten members, Warren did not confirm if there was a unanimous vote. A conference or a commissioner not confirming a unanimous vote just about always confirms the vote was anything but unanimous.

Dave Revsine to K Warren: Was the vote unanimous?

Warren: Our schools don't always agree … I'd rather not have a discussion whether the vote was unanimous or not unanimous.

Clearly, the Big Ten’s decision has left some ruffled feathers around the Big Ten nest, and the push to work up some alternate plan to have some form of a college football season in the fall is likely underway. Putting aside the obvious hangups like media rights conflicts with the Big Ten, there could be some fun to be had in working up how a handful of Big Ten schools go out and try to play football this fall, if such desire continues to burn within. And that fire is certainly burning in Lincoln, Nebraska.

A statement from Nebraska leadership. pic.twitter.com/tFMlYSfnWe

It would be highly unlikely every Big Ten team would follow through on attempting to play this fall for a variety of reasons. But what if you had four schools decide to try playing? Nebraska and Ohio State seem to be in. Penn State head coach James Franklin has also gone on record saying the Nittany Lions may continue evaluating the possibility of playing games this season. And, just for the heck of it, let’s throw Michigan into the group because Jim Harbaugh has also been standing up for playing in the fall. That would give us four Big Ten teams, all traditional household names, and two legitimate playoff contenders in the Buckeyes and Nittany Lions. Could these four teams actually play a season this fall?

Oh, for sure. They probably can’t work up a full 10-game schedule the way things are trending, but there are still options to put together a season. For starters, they could each play each other. That’s three games right there! Ohio State, Michigan, and Penn State were already scheduled to play games this season as division opponents, and Nebraska had crossover matchups with the Buckeyes and Nittany Lions previously scheduled even before the Big Ten adjusted the schedule. Adding a Nebraska-Michigan game to the fold should be easy enough. You can even keep the same dates for most of those games!

Let’s assume we’re not playing in-season home-and-home series, although all options can be on the table and in-season home-and-home series are not unprecedented (it happened last year with Liberty and New Mexico State). There are still plenty of teams out there with some scheduling vacancies. ACC schools are playing a full 10-game conference schedule but the ACC is also allowing its members to schedule one non-conference game this season as long as those opponents play in the same state. That’s good news for Penn State, although it leaves the other three hanging. Penn State could continue its rivalry with Pitt, who just lost its non-conference opponent when the MAC canceled its season. That dropped Miami (Ohio) from the Pitt schedule.

For now, the AAC is still giving it a go, and that leaves a number of options available as well. There are some fun options available with Navy, UCF, Cincinnati, Memphis, and more. Nebraska could re-add its previously scheduled and canceled game with Cincinnati. Penn State could stay in-state and add Temple. Navy has some openings to fill and is in a Big Ten state (Maryland), if that is of any concern.

And we haven’t even touched on the independents just yet. UConn and UMass are among the schools that have decided not to play this season, and Notre Dame will be off-limits due to the ACC non-conference rules (Indiana and Purdue jumping in on the fun could give the Irish an option, though). Due to conference decisions thus far, Army and BYU are each left with a dump truck’s worth of canceled games.

If any Big Ten teams are looking to fill a schedule for the fall, give Army and BYU some calls. pic.twitter.com/ubg3rfmU5y

Air Force is also reportedly hoping to move ahead with playing at least two games this season, against Navy and Army. The Mountain West Conference shut down its season, although the Falcons are hoping to keep the door to open to at least some games. Maybe Air Force could be an option to fill some schedule vacancies.

The SEC is off-limits due to a conference-only scheduling model, but the Big 12, for now, is open for business. That could be great news for Nebraska, who could reunite with their old conference foes for a few games. And who wouldn’t want to see some Oklahoma and Texas vs. Ohio State and Michigan or Penn State? Sign me up!

Unfortunately, the Pac-12 options were also eliminated, unless any of those members decide to go independent of the conference this fall. Listeners of the popular college football podcast The Solid Verbal may be familiar with the phrase “bangers only,” which is a schedule made up of only the best of the best games available. A team like Ohio State or Penn State could easily line up a solid “bangers only” schedule with the options still available at the moment.

If only for one year, it might be fun to see some Big Ten teams go off the rails with their schedules. Who knows if we’ll even have a traditional national championship chase, so why not go all out and have some fun with the schedule if you can do so responsibly?