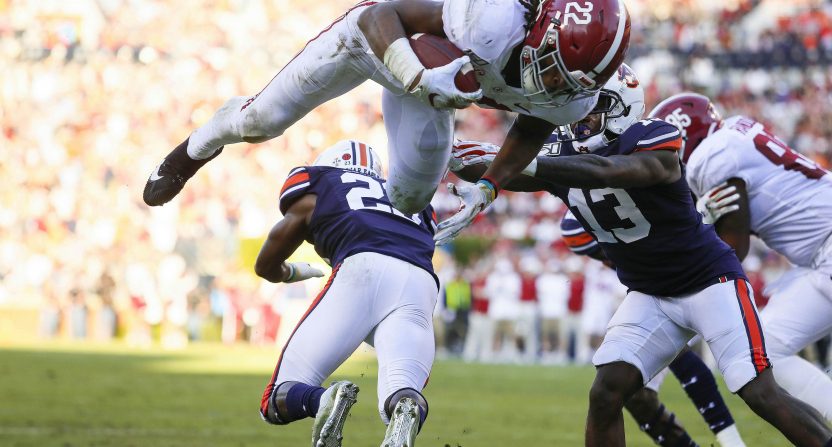 The Iron Bowl has certainly had its moments over the years (See: The Kick Six). But more often than not it’s a blowout thanks to the overwhelming powerhouse that is the Alabama Crimson Tide. However, every few years the game seems to get turned on its head and this appears to be one of those years.

At halftime, Alabama leads Auburn 31-24 in a wild shootout that included a five-minute stretch at the end of the second quarter that included six scores and five total touchdowns.

Five TDs in five minutes of game time in the Iron Bowl. pic.twitter.com/ryzX3cOrFZ

The wild times began with an interception by Auburn’s Smoke Monday that was easily taken to the house to give the Tigers a 17-10 lead.

There was no time to celebrate, however, as Jaylen Waddle torched Auburn’s kick coverage team for a 98-yard touchdown return on the ensuing kick.

Alabama would get the ball back quickly and march towards the endzone once more. They turned that tie-game into a 24-17 lead with a nice floating pass from Mac Jones to Henry Ruggs III. Just like that, it looked like the Tide had regained the momentum of the game.

Touchdown bass (off the back foot) to Henry Ruggs III

So much for that, however, as Auburn drove down the field as well. Bo Nix found Sal Cannella in the corner of the endzone for an absolutely crazy circus catch. With that, the game was tied once more.

Auburn WRs are catching everything Bo Nix is throwing at them. Sal Cannella was inch perfect for this game-tying TD.#IronBowl #BeatBama #WarEagle #BAMAvsAUB pic.twitter.com/4SmlKJ2rlg

That would have been perfectly acceptable to make this a wild Iron Bowl worth sticking with for the second half. However, Jaylen Waddle was not done waddling his way through the Auburn defense. He took a Mac Jones pass and carved his way through he Tigers to put the Tide back up 31-24 with 30 seconds left before halftime.

Jaylen Waddle probably ran for this touchdown faster than the time it took to type out this tweet. pic.twitter.com/sQr2SrCBlL

Auburn was able to tack on a field goal right before the half and we stand at 31-27 with an entire half of Iron Bowl football left to play. Good luck pulling yourself away from the television this afternoon.