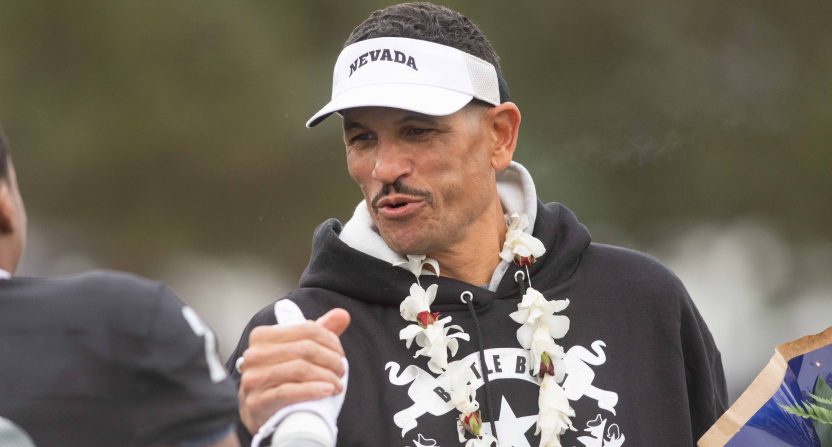 When the coaching carousel started spinning, Jay Norvell was a name on a lot of people’s radars. Ultimately, while the Nevada Wolfpack coach didn’t land any of the high-profile P5 jobs out there, he’s moving on to take over as the new head coach for the Colorado State Rams.

Ironically, Norvell coached against Colorado State in their final games for each program. Not only did Nevada decimate Colorado State, 52-10, but Addazio was forced to leave the game after being ejected. Now, Norvell has his job.

After a tough first season, Norvell has made Nevada into a consistent winner in the last four years. They finished this season 8-4 and are going to their fourth bowl game in a row, this time it’ll be the Quick Lane Bowl. Norvell went 33-26 in five seasons there.

Prior to his time at Nevada, Norvell cut his teeth as an assistant in the NFL and college football, ultimately becoming offensive coordinator for Nebraska, UCLA, and Oklahoma as well as WR coach for Texas and Arizona State.

The reaction across the college football world to the hire was near-universally positive, especially given the fact that he’s replacing a coach that a lot of Colorado State folks wanted to go.

Jay Norvell is a good hire for Colorado State. I have no idea if it’ll work out.

Were it not for Mario Cristobal, we would all be talking about how much of this Jay Norvell had planned out. https://t.co/0Bq2ZxU0VK

This is a fantastic hire that many in the CSU world wanted, but I didn’t think was all that realistic.

Worlds better than Bobo and Addazio. Very happy with this. https://t.co/ZYAUpH3N0Y

It might seem like a surprising move for someone like Norvell to make an inter-conference move rather than trying to move up to the P5 world, but there’s likely a method to his madness. Whether it’s financial, facilities, or something else, we’ll see. And besides, is it any wilder than everything else we’ve seen in the coaching carousel so far this season?