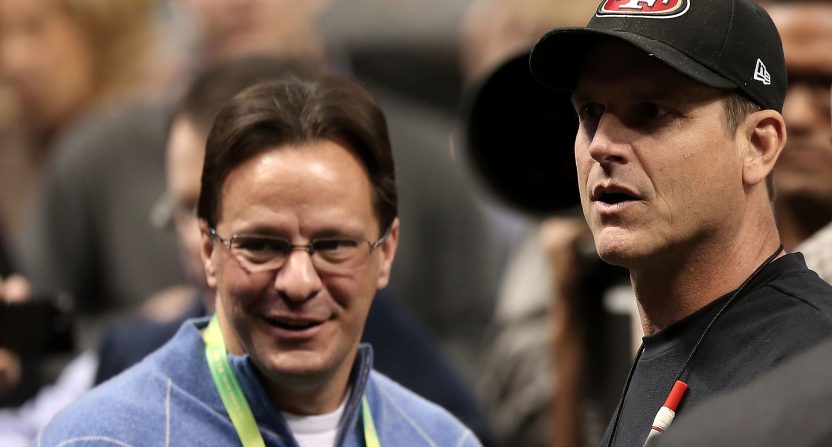 Tom Crean’s ties to the Harbaugh family are well-known at this point; he’s married to Jim and John’s sister.

Both Jim and John Harbaugh made appearances at Indiana basketball games throughout Crean’s tenure, including a memorable instance of Jim Harbaugh serving as a manager, setting up chairs for players during timeouts and handing out water.

But in the wake of Crean’s firing, both John and Jim have come out with some very strong words of support for Tom, with equally strong criticism for the Indiana University administration and athletic department.

That’s notable for a few reasons. One, Jim obviously coaches at another Big Ten school. And two, John Harbaugh used to be an Indiana football assistant, so he has even greater perspective on the situation.

This all comes from a fantastic piece by Sports Illustrated’s Michael Rosenberg. A few choice quotes:

John Harbaugh, on what he texted Crean when he heard the news:

“This will be the best day of your career.”

Jim Harbaugh compared Crean’s situation at Indiana to his own situation with the 49ers:

Jim Harbaugh looks at Crean’s Indiana tenure and says, “much like my situation in San Francisco, the people that are doing the micromanaging … when it comes to building a ball team, what they know could not blow up a small balloon. In my case, an owner and a general manager. In his case, an administration. They are so similar in that way. And he still wins two Big Ten championships outright.”

And then John, again, dropping the hammer on Indiana as a whole:

“In the end, it was the lack of support that basically takes its toll the most. You want to feel like you’re part of a team and you’re doing it together. It’s about knowledge, loyalty and leadership. This is the merry-ground that Indiana athletics has been on forever.”

The Harbaugh family isn’t one to mince words, of course, but it’s still a bit jarring to hear people in the know come out this strongly against a university. Of course they’re going to defend their brother-in-law, but in this case, that doesn’t really make them wrong, either.

The whole piece is very much worth reading, especially the parts expressing frustration that goes back much farther than this season. Crean really did do an amazing job of bringing the program out of rarely seen depths; the roster during his first season in charge was truly one of the worst major conference basketball rosters in the last thirty years. (Unless you really liked Kyle Taber’s game.*)

And despite that entire process, and the multiple outright Big Ten conference titles, and by all accounts running a clean and academically successful program, he was still the first person to be blamed for any loss, an entire season of success forgotten in an instant.

That’s how it is at a big-time job, though, which Indiana at least considers itself to be. Crean was handsomely compensated, and he will find another place to be successful. And Indiana has a chance to bring in a new voice, that really could improve and offer greater ceilings and higher floors.

But that’s not a guarantee, and if they fail to do that, they’ll just be proving critics like the Harbaugh brothers correct.