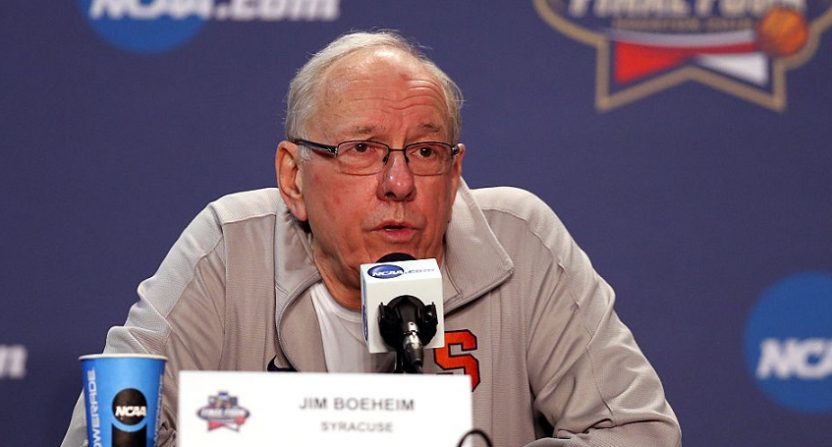 Jim Boeheim has a way with words.

Well, actually, let’s back that up. Jim Boeheim has a way of saying words.

In fact, the Hall of Fame basketball coach has a way of taking reasonable ideas and unleashing them on the world in an unnecessarily harsh way.

There was the time Boeheim felt that his star player was being undervalued and disagreed with that assessment. Then there was the time he was asked about retirement minutes after a Final Four loss and didn’t feel as though the timing was appropriate. Recently, he didn’t appreciate a reporter’s insistance that his Syracuse Orange looked impatient on the court. When another reporter wondered aloud whether or not Boeheim runs a clean program, the head coach let him know that he thought he did… in so many words. And so on and so on.

Sometimes, Boeheim is out of line (even slanderously so). But other times, he has a valid point. You just have to go digging underneath the smug entitlement to find it.

Just ask Bud Poliquin. The longtime Syracuse Post-Standard columnist wrote earlier this year that Boeheim’s program was in the midst of a three-year spiral, despite the fact that SU had gone to the Final Four the previous year. Ever concerned with what people think of him, in spite of his efforts to convince you otherwise, Boeheim dug into Poliquin at a post-game presser, arguing that since the program had been to two Final Fours in the past four years, the regular season results were irrelevant. Only Final Fours and Championships matter.

We can debate the merits of that argument, but the truth is that Boeheim will always be measured for what his Syracuse teams did in the postseason more than anything they ever did in the regular season. Jim had purposefully chosen to go in at Poliquin at one of his press conferences, where he commanded a bully pulpit and stood high above the columnist on a stage where he could control the discussion. Not the kindest way to go about it, but his point was made all the same.

Jim Boeheim is everything you think he is. He’s a curmudgeon. He’s ornery and set in his ways. He seems to think he knows everything. He’s smug and thin-skinned and has a face that’s eminently punchable. He sits up there in his own little fiefdom in Central New York and acts like he runs the place, which he kinda does.

But, and this is the thing you really don’t want to admit to yourself, oftentimes he’s got a point.

All of which brings us to Wednesday when the Orange faltered in the second round of the 2017 ACC Tournament against the Miami Hurricanes. For the second consecutive year, Boeheim’s squad will limp into Selection Sunday with no idea of whether or not they’ll be dancing next week. The post-game press conference was prime territory for a Boeheim corker.

And boy, did he deliver.

Because the ACC Tournament was being held in Brooklyn for the first time, Boeheim was asked whether or not he liked the site choice and if playing in this kind of atmosphere was the right move moving forward for the league.

Had he stopped there, like most coaches would, no one would even remember this press conference. But because he’s Boeheim, he kept going.

“There’s no value in playing in Greensboro. None. It’s there because the league’s been there and the office is there and they have 150 people that the ACC needs. That’s why it’s there. It should not be there.”

“And I’m saying all these things because I don’t give a shit. I’m just saying what’s right. That’s what’s right.”

And with that, the coach pulled a classic Boeheim. He was the condescending jerk so many already know him to be. The big city New Yorker (which is hysterical, because he’s lived his entire life in Upstate New York) talking down to The South (something he’s done once or twice before).

The city of Greensboro got theirs and kudos to their social media intern for the quick wit. Twitter was peppered with college basketball pundits and fans alike taking their shots at Jimmy B, all too eager to knock him down a peg for his dickery.

.@AdamZagoria @ACCSports We kindly disagree. But I guess you can lose in the 1st round anywhere. At least it's a quick ride home.

But did you miss the part where he’s right? Because it’s easy to do that when you’re busy taking down a bully. While everyone was busy shooting the messenger, they didn’t stop to recognize that his message was actually 100 percent accurate.

Discount the Greensboro digs for a moment and stick with Boeheim’s original thesis. College basketball tournaments should be played in big media centers because that’s what builds your brand and that’s what attracts recruits in the modern world. If all you do is take that information in, it’s hard to deny that he’s making a solid point.

He would know, too. Boeheim was there when the Big East started and he was there long enough to see the conference crumble under its own provincial weight. He was there when the Big East was king and he watched it squander that goodwill. He watched as the conference refused to budge from its Providence-based roots and refused to stop pretending it was the 1980s until it was too late. By then, San Diego State was about to join the fold and longtime members were jumping ship to safer ground.

He knows better than most how college athletics have changed in the last 30 years. He knows what happens when you don’t change with it. So as the ACC expands to schools from Massachusetts, New York, Pennsylvania, and Kentucky, it has to expand beyond its traditional North Carolina roots as well. Duke and North Carolina might always be the beating heart of the basketball conference, but without the extremities up and down the coast, a heart is just pumping blood for the sake of it.

The Big Ten would gladly fight the ACC for the right to control New York City. Same for Washington, D.C. and Philadelphia. Meanwhile, the Pac-12 dreams of worldwide coverage and football games in Australia. The SEC simply remains a football juggernaut that the ACC makes inroads against, but still can’t match its overall breadth of national recognition.

The worst thing the ACC could do is retreat back into its traditions. And to be fair, that isn’t the road the conference seems to be walking. The conference has been expanding its footprint left and right in recent years, eager to be known as a national league and not just a regional one. Sometimes, that expansion has been forced (the ACC Football Game move to Orlando over HB2 legislation), but the league deserves credit for making the moves nonetheless.

And that’s where Boeheim got it wrong. He seemed to be under the assumption that a whole lot of people out there were up in arms about the conference’s big-city moves. Perhaps they are, but they’re all being drown out in the name of the almighty dollar. There was no opposition that Jim needed to swat back down from his perch. His side has already won. And if there’s anything people hate, it’s a sore winner. Even if they’re complaining after losing.

The longtime Syracuse coach’s career is coming to a close soon, one way or another. Whether he coaches one more year or just sticks around until he pops his clogs, he’s unlikely to ever endear himself to the rest of the ACC, given what he’s said so far. Mostly because of the way he spoke, but also because, deep down, he was usually speaking truth when he said it.