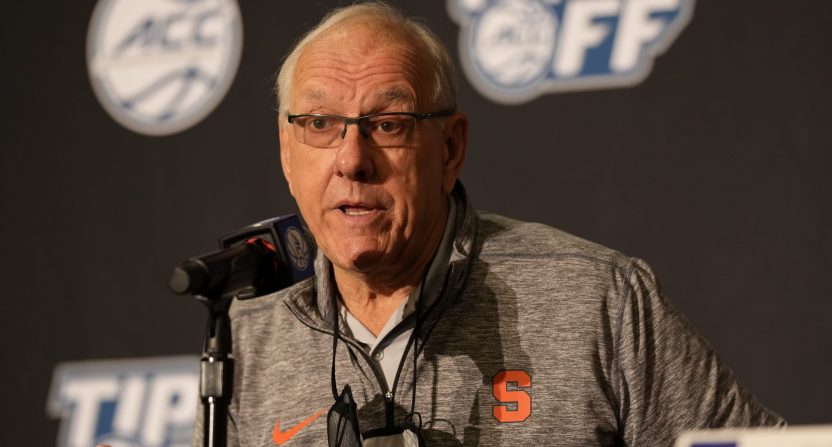 Jim Boeheim has never been shy about speaking his mind. He tends to have pretty strong opinions about a lot of things involving college basketball, especially around the way players are compensated. He’s long defended the way the system has been set up and called paying players “idiotic.” And considering he’s basically got the job at Syracuse until he decides otherwise, that works out pretty well for him.

Still, even if Boeheim won’t change, the world changes around him. And now that the NCAA’s name, image, and likeness (NIL) policy allows college athletes to directly benefit from their position and notoriety, that means the old curmudgeon with plenty of opinions is going to have an opinion about the state of things now as well.

During ACC Media Day on Tuesday, Boeheim talked about the current situation surrounding NIL, which he thinks is headed for disaster for some reason.

“The NIL is something that is going to need to be figured out. It’s not — I don’t see how it ends well in any way, shape, or form. I think if it was — the NIL was organic and kids just got what they could get, that would be great. That doesn’t happen. It’s already not happening. And it will be even worse in the future. So — I don’t know what can be done about that either. But you don’t like to talk about problems when you have no solution. But I certainly — I don’t think anybody has a solution for it. And we’ll see where it all goes.”

“We’re waiting on Congress for that? Good luck.” -Jim Boeheim on NIL legislation

As for what his biggest problem with NIL is right now, it appears to be that a select few people benefit over others.

“I think the biggest problem is the inequity. One person gets stuff and nobody else does, or two guys. It’s just — I don’t think people understand the whole experience right now in college. I’ve tried to ask some writers to write about it. Nobody wants to.

“Players are getting a lot of money right now that they never got before. I don’t think the average person on the street knows that. I think there’s people in college that don’t know that. But because of the cost of attendance and the way meals are now provided, players can get — I know it’s as low as $400 a month and it’s as much as $2,000 a month, and that’s without Pell Grants.

“And then — but the problem with the NIL is obviously certain players are getting the money. I think our players understand that Buddy had the year he had, and so he’s getting this stuff. Some players are getting a little bit. It’s going to change. It will gradually change over the years when — I think companies get more aware of what they can do or what they could do.”

It’s not entirely clear what Boeheim is talking about. Plenty of people have written about the ways college athletes are compensated, with or without NIL. He’s just being selective in what he wants to see.

Boeheim really doesn’t seem to want to dig into the meat of the discussion, that it’s less about if players are compensated and more about making sure players are compensated fairly. The fact that NIL will benefit some athletes over others is the point. If you are a bigger star, the school is almost certainly benefitting from your presence more, and therefore you deserve higher compensation. That’s how it works in most workplaces in America, including the world of college coaches.

The purpose of NIL has clearly went over Jim Boeheim’s head. https://t.co/i1r749UBf1

A great example of this, as he notes, is his son Buddy Boeheim. Buddy was a breakout star for Syracuse last year and he’s parlayed that into a bunch of NIL deals. It’s ironic given Jim’s long-standing aversion to this kind of thing, but it’s working out pretty well for the Boeheims right now.

“I mean, personally, for me it’s been a very good experience just getting to interact with fans doing different things, like Cameo, just doing videos for people and just trying to make their day, whatever it may be,” said Buddy. “Put a smile on their face, doing signings whatever it is, doing some fun stuff with local companies.”

Sorry about all that extra family income, Jim.