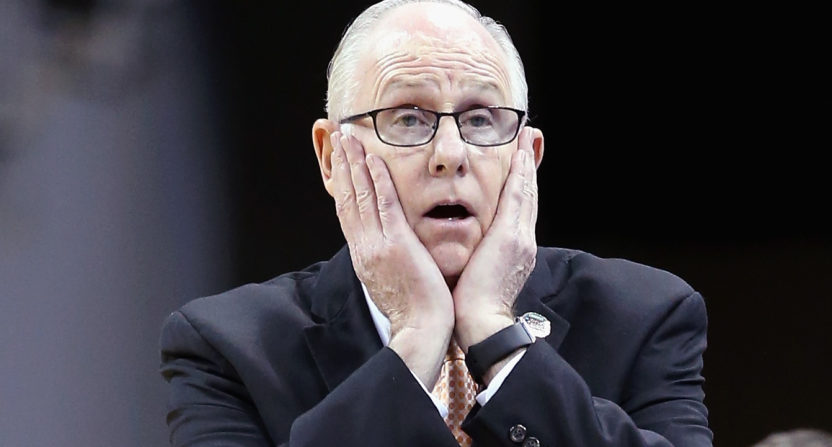 In late September, the college basketball world was rocked when the FBI unveiled their investigation into corruption among coaches, apparel company Adidas, and payments made to recruits. At first, everyone focused on Oklahoma State, Arizona, USC, and Auburn where assistant coaches had been arrested as part of the sting. However, the net soon widened to include multiple programs. Louisville’s world came crumbling down as the investigation’s findings led to the firing of both athletics director Tom Jurich and storied men’s basketball coach Rick Pitino.

Now, eyes are turning to the other programs included in the findings (and the rumored findings yet to come) as reporters try to figure out who the anonymous coaches included in the DOJ report on the FBI investigation actually are.

Miami head coach Jim Larranaga has decided not to wait and is coming forward before someone else tabs him. Larranaga told reporters Monday that his legal team believes he is ‘Coach-3,’ in the DOJ report and that he is complying with investigators. He says he’s turned over numerous emails and messages to them. He also says he is “thankful” to be named because he does not think he did anything wrong and it would also mean his assistants did nothing wrong.

Opening words from Jim Larrañaga. His first appearance since the University of Miami was placed under FBI Investigation. pic.twitter.com/U1GHmbG33q

According to the report, ‘Coach-3’ knew about an Adidas executive and others who planned to funnel $150,000 to a 2018 recruit identified later as Nassir Little. Larranaga declined to comment about his relationship with former Adidas executive Jim Gatto, who was fired in the wake of the investigation.

Little and his father sent signed statements to the Palm Beach Post saying they and Miami didn’t do anything wrong.

Miami coach Jim Larranaga received a grand jury subpoena for texts, emails and other items in the college hoops bribery and corruption case.

Much as with the payments to Player-10 described above, according to intercepted calls, GATTO stated that the payments from Company-1 to Player-12 were allegedly requested specifically by a coach at University-7 (“Coach-3”), who allegedly called GATTO directly and who, according to DAWKINS, CODE, and AUGUSTINE, “knows everything” and, in particular, “knows something’s gotta happen for” Player-12 to commit to attending University-7.

The accusation in the report doesn’t bode well for Larranaga, but if he’s willing to come forward in an attempt to clear his name he at least will get the benefit of the doubt until more information is released.