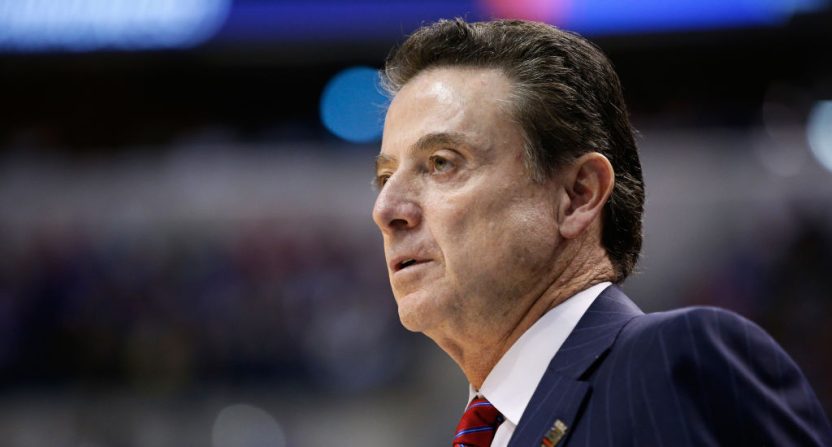 A day after the college basketball world was rocked by news of a massive FBI investigation into corruption across multiple programs, the fallout at Louisville has been swift and dramatic.

Louisville responded to the FBI investigation’s findings by reportedly firing athletics director Tom Jurich and men’s basketball coach Rick Pitino on Wednesday after the school’s program was tied to the probe into alleged fraud and corruption charges on the recruiting trail.

After federal investigators got involved, Louisville had no choice but to cut ties with the head coach who had denied any knowledge of past recruiting violations and the man who brought him to Louisville in the first place. Considering the FBI discovered a Louisville basketball assistant was conspiring to cheat with a representative from Adidas about a month and a half after the NCAA slapped the program with sanctions, it’s clear that Louisville was out of control.

Louisville received its punishment from the NCAA 6/11. A bball assistant was in a hotel room in Vegas w/Adidas conspiring to cheat on 7/27.

For Pitino, a complicated legacy has now been etched in cement. No matter how many times Pitino denied any knowledge of actions committed by assistants who were in violation of NCAA rules, the head coach finally wound up paying for the actions. And it took a federal investigation for it to happen.

With his program already on NCAA probation following a recruiting sex scandal, Pitino’s legacy will be dragged through even more mud now, making his future employment opportunities very few and far between. Time can be the ultimate forgiving factor for coaches with a troubled past in the game, but even a championship-winning coach like Pitino should have a difficult time getting back on a sideline again. And given the information available, that is absolutely deserved for Pitino after frequent denials finally caught up to him.

Forget about the NCAA status of Louisville for a moment, because this is a federal situation at hand. Until the FBI is done with its case and the legal process has played out, it remains to be seen just how the NCAA will respond. Given the multiple schools involved, the NCAA will certainly be pressured to act accordingly when needed, and that means revisiting Louisville yet again.

Some have suggested the death penalty should be in play for Louisville, but is this strong enough a case for the NCAA to give that extreme punishment serious consideration? Arguments for it might be justified, but that is far down the road at this point.

The fallout from this latest FBI bombshell is far from settled, however. With so many schools and coaches and assistants tied to the investigation, there will be more decisions to be made around the college basketball world. The question now becomes just how much of an impact this will have on the college basketball, and college athletics world as a whole, moving forward.

In an ideal world, this would be the last straw for shady recruiting tactics. This would be the end of any influence from outside parties with a vested interest in amateur athletes, especially in the college basketball world. But it won’t be. We all know it. If you think this will mean we never see a coach get caught working around the rules of the game, and perhaps around the law, you’re fooling yourself. If there is an edge to be gained, they will find it and expose it.

Head coaches and ADs will continue to deny the problem exists, especially once this story becomes a distant memory. Considering how quickly we tend to move on to the next story, the impact this one brings on college sports is probably not going to be as long-lasting as you might think.

Even as ongoing legal battles for coaches tied to the investigation go on in the courts for whatever undetermined amount of time, the story may pop up in the headlines, but the public outcry over it will eventually fade as it does for any story. That will allow the sport to move on and, eventually, as if almost nothing happened.

College football is no bastion of purity either, as we know by now. The sport has long been tainted by stories of players accepting money and other benefits from boosters and sports agents in an attempt to gain an edge in recruiting or beyond with NFL prospects. Just this year, we have witnessed Ole Miss part ways with Hugh Freeze amid alleged phone calls to escort services on recruiting trips.

Shoe companies may not have quite the same influence on the football recruiting trail, but tales of bag men and hundred-dollar handshakes are infamous in college football, and it may just be a matter of time before the FBI digs in to do some investigating on that sport as well. It may be long overdue.

I hope I’m wrong because it would be nice to be able to simply enjoy these sports for what they are on a guilt-free level. But we’ll never get quite there, no matter how much talking heads will use this as an example of everything that is wrong with college athletics. They are not wrong, mind you, but will this mean anything ultimately changes going forward? As much as I’d like to say “yes,” I just can’t imagine coaches will be bold enough to follow the rules for too long.

Simply paying players their market value would be good to see, but that won’t mean a few extra bucks can’t be provided by some booster on the side through not-so-legal methods. We need a more comprehensive answer for this ongoing issue, and right now there are very few, if any, foolproof methods to address the biggest concerns with amateur athletes. Until there are, stories like this FBI investigation should not be surprising.