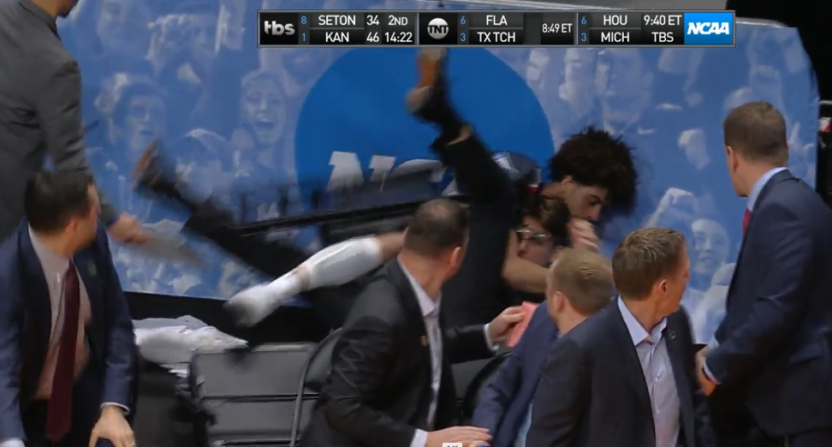 Players diving for loose balls often create collisions, and Gonzaga’s Josh Perkins gave us one of the heaviest in a while Saturday. In the Zags’ second-round game against the Ohio State Buckeyes, Ohio State’s Keita Bates-Diop went for a layup and got blocked by Gonzaga’s Rui Hachimura. That led to a loose ball bouncing towards the Gonzaga bench, and Perkins dove to try and keep it inbounds. But he couldn’t quite pull it off, and his momentum carried him through a chair in the first row of the bench (which fortunately was empty) and into coordinator of analytics and video operations Riccardo Fois in the second row. Perkins hit Fois pretty hard, and both crashed to the floor:

Fortunately, both appeared to survive the occasion okay, and Fois’ glasses even appear intact. But this led to lots of Twitter commentary:

Play of the game is #Gonzaga guard Josh Perkins diving over the bench for a loose ball and tackling video coordinator Riccardo Fois. Gotta give Perk credit, he wrapped up well.

Josh Perkins just flew over the Gonzaga coaching staff, tackled an assistant behind the bench, and flung a chair up into the air. Ohio State ball, but great hustle. Nobody was hurt.

Josh Perkins just went soaring over the Gonzaga bench to save a loose ball, he and the guy he tackled recovered just fine. 34-25 #Zags

Gonzaga assistant Riccardo Fois just took a WWE worthy shot on the sideline, with a chair flying up in the air after a collision with Josh Perkins. Wrestlemania isn't for another couple weeks, is it?

Someone gotta dub this to Jim Ross (cc @cjzero) https://t.co/doEYKOKCM2