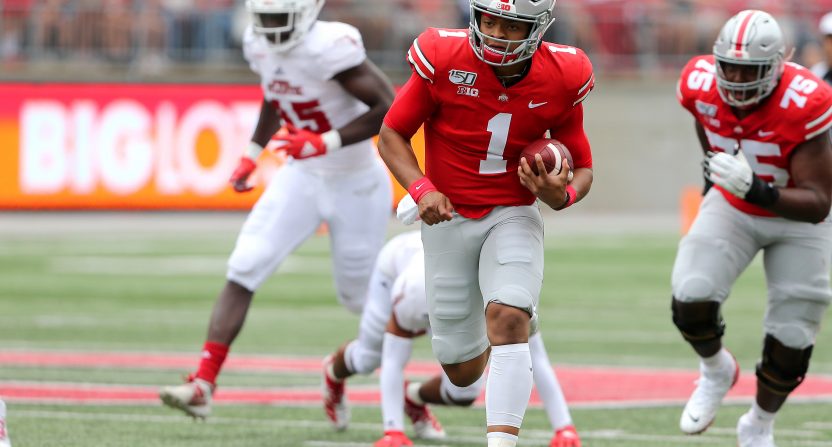 Any thought that Ohio State would skip a beat this season with a new head coach and without Dwayne Haskins were quickly put to rest in the season opener. Justin Fields, the transfer quarterback from Georgia, showed why head coach Ryan Day named him the starting quarterback this season with a brilliant debut in The Horseshoe. The sample size may be minuscule, but Ohio State has good reason to feel they are still the team to beat in the Big Ten.

Fields took off for a 51-yard touchdown run on his first rushing attempt early in the game, giving Ohio State a quick 7-0 lead on overmatched FAU. The Fighting Lane Kiffins were unable to slow down Fields and Ohio State as the new starting quarterback began finding wide receivers wide open for easy touchdowns.

In the blink of an eye, Ohio State had a 21-0 lead and even Gus Johnson was lacking the ability to make anything happening on the field remotely interesting to the viewers at home. The rout was on and they cruised to a 45-21 victory.

Sure, the opponent was FAU and that has a lot to do with the results on the field. Considering Ohio State has been the top Big Ten program when it comes to recruiting and player development during the Urban Meyer Era, and Ryan Day isn’t exactly taking over a rebuilding project in Columbus, it’s unlikely that many people will be surprised. But while Michigan and Nebraska have been trendy picks as Big Ten contenders this season, Ohio State has won the conference each of the last two years and has plenty of talent to work with to make a run at the first three-peat in the Big Ten Championship Game Era.

With Fields showing he was ready to step in and be the next guy in line, following Dwayne Haskins’ record-setting season in Day’s offense, watch out for Ohio State once more. As long as the Buckeyes can avoid one of those pesky blowout losses on the road to teams they have no business losing to, this could once again be their year in the Big Ten.

But what about that quarterback that left Georgia after Fields committed to Georgia? He wasn’t having a bad debut with his new team either.

After Fields originally committed to Georgia, Jacob Eason quickly became the odd man out in the program. With Jake Fromm taking over Georgia’s offense in 2017, Eason saw the writing on the wall after Kirby Smart landed Fields’ commitment. With Fields at Georgia and Fromm holding the starting job, Eason was on his way to Washington. After sitting out a year due to those silly NCAA transfer rules, Eason is getting going for the defending Pac-12 champions in style.

It’s fair to remind you that Washington isn’t exactly tasking on a juggernaut in their opener, but seeing stats like these are always a good sign. Just look at Tate Martell, who, of course, left Ohio State for Miami following the transfer of Fields. Martell didn’t win the starting job at Miami and has been seen playing receiver instead.

With transfer quarterbacks, you win some and you lose some. Looks like Ohio State is a winner. Again.