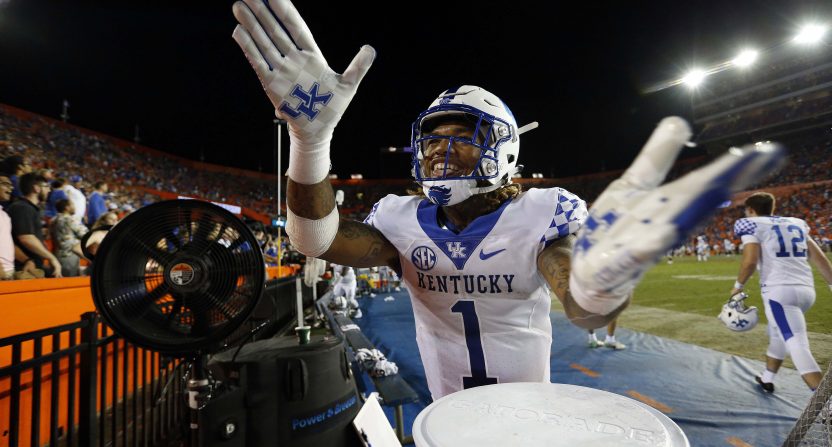 The long-awaited moment Kentucky football fans had been waiting decades for finally arrived Saturday night in Gainesville. Kentucky’s 31-game losing streak to the Gators was snapped in The Swamp by a 27-16 decision in favor of the Wildcats. After outscoring the Gators 21-7 in the second half, Kentucky soaked in the glory of the victory that had been so difficult to come by since the early 1980s.

THE STREAK IS OVER!!!

KENTUCKY HAS DONE IT!!! @UKFootball beats Florida for the first time since 1986. pic.twitter.com/KFw5kHvbwk

But, because this is Kentucky we are talking about, the moment to celebrate the win was delayed due to a video review that had to determine if Florida quarterback Feleipe Franks had thrown an incomplete pass with time left on the clock for one final play or if the Wildcats defense forced a fumble that was returned for a score by Davonte Robinson. Kentucky still owned the lead even if the play was called an incomplete pass, but the review came back favoring Kentucky and the ballgame was over.

Kentucky sure flexed some muscle in this one too, outgaining Florida 454-360. If the losing streak wasn’t enough to fire up Kentucky for the game, then perhaps the bulletin board material provided by Florida cornerback Chauncey Gardner-Johnson earlier the week did. Gardner-Johnson guaranteed a 32nd straight win over the Wildcats during a session with the media this week.

"It's 31, right? It'll be 32 on Saturday." — Gators DB Chauncey Gardner-Johnson on streak against Kentucky

Well, it’s one now, for Kentucky.

The streak dated back to 1987, but Kentucky’s woes against Florida have been prevalent for much of the series history. It wasn’t just losing 31 consecutive games to a conference foe, because Kentucky had lost 37 of the previous 38 meetings and had just four wins since the nation’s bicentennial in 1976. And many of those losses piling up year after year were one-sided affairs with Florida building into a regular SEC and national title contender at various points in the winning streak while Kentucky was always known as a basketball school for a reason.

One win won’t change the entire landscape of where this SEC series will go in the years to come, but Kentucky will look to make it two in a row next year when the series shifts to Lexington. Kentucky hasn’t had consecutive wins against Florida since winning back-to-back games in 19876 and 1977. But for now, Mark Stoops will just have to find a way to keep things going.

Next up for Kentucky is a road game at South Carolina. After the beating the Gamecocks took at home against Georgia, we’ll see if South Carolina comes out angry and catches a Kentucky hangover in division play, or if Kentucky can dig deep and win back-to-back SEC games on the road for the first time since 2009.