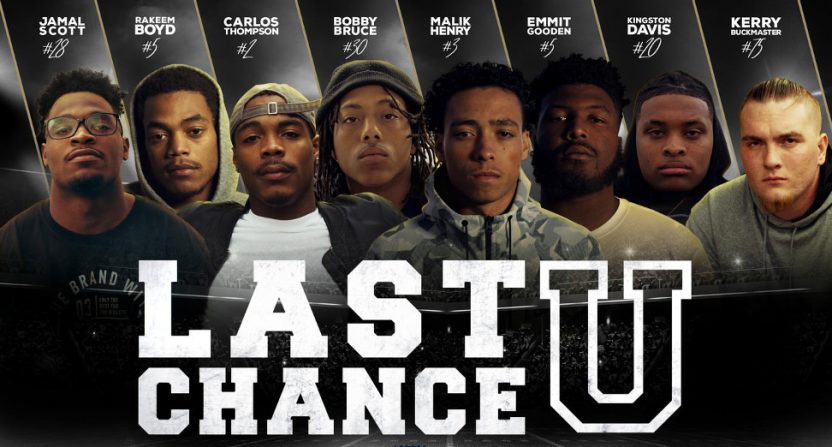 The third season of Last Chance U (poster seen above) saw the Netflix show shift its focus from East Mississippi Community College to Kansas’ Independence Community College with mixed results; the documentary’s off-the-field content was perhaps a bit lacking compared to the first two seasons, but many viewers enjoyed the new perspective from brash Independence coach Jason Brown. And the documentary certainly brought plenty of attention to ICC, with the school using it to try and raise funds for a new practice field (they initially had a $250,000 goal, but have since revised it down to $25,000, and are now over $7,000 of the way there after a couple of months) and mentioning that there would be a Season 4 at the school in that update.

So, what about that fourth season? Well, the Last Chance U showrunners  told The Wichita Eagle in late July that although Netflix had not officially greenlit a fourth season yet, they were planning to cover Independence for another year and had already begun some shooting. Now, Season 4 is official:

Last Chance U returns to Kansas!

As per Ashley Boucher of The Wrap, director Greg Whiteley said there were compelling reasons to do a second season on the ICC Pirates:

Director and executive producer Greg Whiteley said that a return trip is “warranted” because of a surge in recruiting in the Jayhawk Conference, and because of that, he thinks that the fourth installment could be the show’s “best season yet.”

“Coach Brown has recruited a number of players this season who have compelling back stories and it seems the Jayhawk conference as a whole has seen a surge in recruiting,” said Whiteley said. “As such, we feel that a return trip to Kansas is warranted.  After visiting the ICC campus last week and meeting the new players, I think Season 4 could be our best season yet.”

We’ll see how Season 4 turns out. There were certainly elements of Season 3 many found interesting, including Brown’s personality and the Pirates’ previous struggles, and it will be worth watching to see how things go with a new recruiting class. But will Season 4 find ways to address some of the criticisms of its lessened coverage of the players’ academic challenges? We’ll have to wait and see.