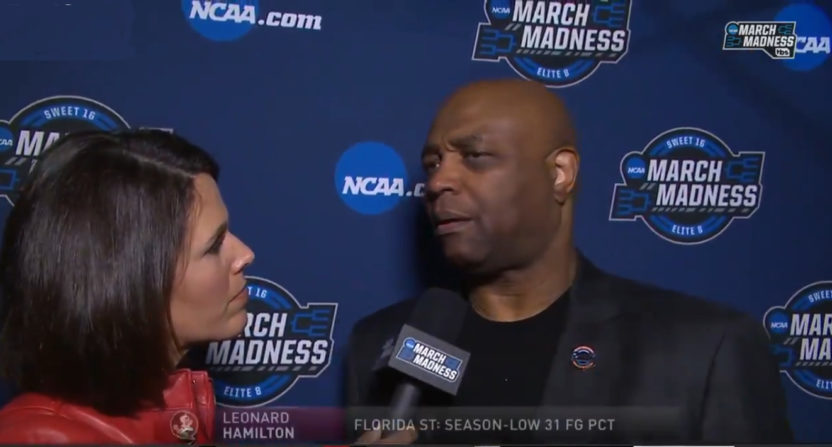 Hamilton’s behavior here took a lot of deserved criticism, and on Sunday, he released a statement through Florida State’s men’s basketball Twitter account:

For context, here’s the original interview:

Florida State head coach Leonard Hamilton on the decision not to foul with 11 seconds remaining.#MarchMadness pic.twitter.com/IxlWNnuPRa

Hamilton isn’t wrong that it can be difficult to give a level-headed interview after an emotional moment, and it’s perhaps particularly difficult to break down particular moments in a loss immediately afterwards. Still, many coaches and athletes manage to answer questions like this without creating controversy. And while his “I wish I could have done better” is something, as is his recognition that Jacobson was doing her job, it’s far from a full apology.

For what it’s worth, though, Jacobson tweeted Saturday she didn’t have a problem with his comments:

Coach Hamilton spoke to me minutes after an emotional @FSUHoops loss. It was the right question to ask. He showed emotion & I appreciate him talking through it w/me instead of walking off. He was nothing but professional w/me throughout this weekend as I believe I was with them.

And Jacobson is also right; it would have been much more problematic for Hamilton to walk off here, and while he may have been frustrated with her questions, he at least eventually got close to providing some sort of answer. But his behavior here was still far from ideal for a coach-reporter interaction. And while his statement’s appreciated, especially with his support for Jacobson doing her job and with his admission that he could have done better, it would have been nicer still to see a fuller apology.

Still, at least Hamilton admitted his actions here weren’t ideal, and that’s something.