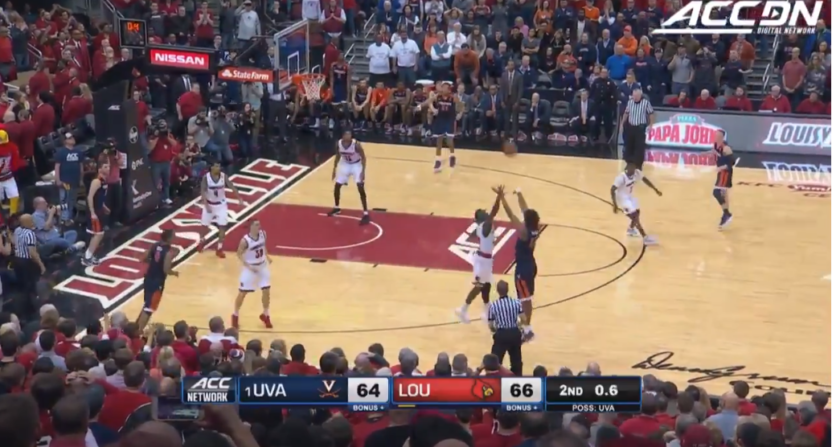 The Louisville Cardinals took a 66-62 lead into literally the final second of Thursday night’s game against No. 1 Virginia.

And lost, in regulation.

With 0.9 seconds left, Louisville’s Darius Perry did the one thing you can’t do with a four-point lead in the final seconds: foul a three-point shooter. Virginia’s Ty Jerome missed the three-pointer, and hit the first two free throws to make it a 66-64 game. But Virginia was called for a lane violation on the third free throw, giving Louisville the ball back.

So, it appeared that Louisville had finally escaped with the win. However, Louisville’s Deng Adel was called for a turnover for running the baseline on the ensuing inbounds play, and that took no time off the clock.

Here's a look @ the play before the Hunter game-winner that got Virginia the ball back. You can't see in the video but the ref very clearly told Deng Adel that he couldn't run the baseline (result of the FT lane violation) but he did anyway. KFC Yum Center was absolutely deflated pic.twitter.com/MiNlcdVlhw

And with 0.9 seconds left, De’Andre Hunter banked in a long three at the buzzer for the unbelievable Virginia win.

One of the most bizarre endings I've ever seen. Louisville all but had the upset but a few costly Cardinals mental errors and a huge triple from Hunter at the buzzer wins it for Virginia. pic.twitter.com/YD78Q6WsiB

What a brutal collapse by Louisville. It’s also an amazing comeback win for Virginia, and the top-ranked Cavaliers are now 27-2 (16-1 in ACC play) on the season.