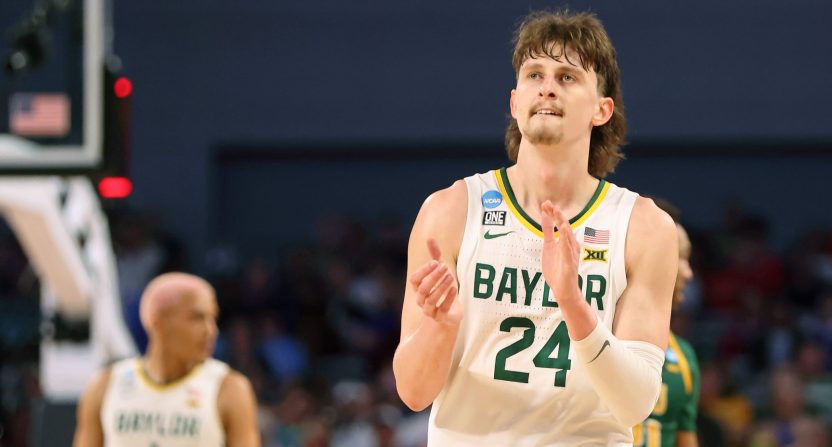 Former Baylor forward Matthew Mayer and his mullet recently withdrew from the 2022 NBA Draft and entered the transfer portal. On Thursday, Mayer told Stadium that he had four finalists to be his transfer destination: Illinois, Memphis, North Carolina, and Texas Tech.

The skilled and athletic forward recently withdrew from the NBA Draft.

And on Friday, Mayer made his transfer decision.

The 6’9″ forward announced on Instagram that he’s transferring to play hoops for the Illinois Fighting Illini.

This is a big get for Illinois head coach Brad Underwood, who also reeled in one of Mayer’s teammates in big man Dain Danja (only played nine minutes in 2021-22 as a freshman), along with Texas Tech wing Terrence Shannon Jr. (10.4 points per game in 2021-22).

Mayer averaged 9.8 points and 5.0 rebounds for Baylor in the 2021-22 season while starting all 33 games. He also ranked high in the major defensive metrics, such as first in the Big 12 in Defensive Rating (an estimate of points allowed per 100 possessions).

In what’s a loaded transfer portal, Mayer came in at No. 1 overall among transfers according to Evan Miya’s portal rankings.

Illinois went 23-10 and was a 4-seed in the 2022 NCAA Tournament, but the team will look significantly different next season. Kofi Cockburn is off to the pros, Austin Hutcherson and Jacob Grandison declared for the NBA Draft but haven’t made their official decisions yet, Trent Frazier, Da’Monte Williams, and Alfonso Plummer ran out of college eligibility, and Andre Curbelo, Brandin Podziemski, Omar Payne, and Benjamin Bosmans-Verdonk all transferred.

But Underwood and his staff have a highly regarded freshman recruiting class, and they’ve now made a few impact moves in the transfer portal. This will be a really interesting team to watch, and they have a high upside if everything clicks.

Here’s a look at how the college basketball world is reacting to Mayer choosing Illinois:

They won’t be as big without Kofi but man there’s a LOT of offensive potential.

Skyy Clark needs to be really good as a freshman and the Illini can make a run. https://t.co/gG37a8iWsJ

Matthew Mayer to Illinois. I thought UNC was a great fit, but Illinois makes sense too. It could allow the Illini to pivot to a more athletic lineup with Clark/Melendez/Shannon/Mayer/Hawkins with the question marks in the frontcourt. I like the idea of that starting five. https://t.co/FSL2AMPTpG

Matthew Mayer is headed to Illinois. HUGE addition for an Illini squad that really needed his shooting and help on the wing. He should have a featured role

Matthew Mayer announces he is headed to Illinois. The Illini are gonna look completely different next season. So much versatility.

MAYER TO ILLINOIS?! WHAT IS HAPPENING?!