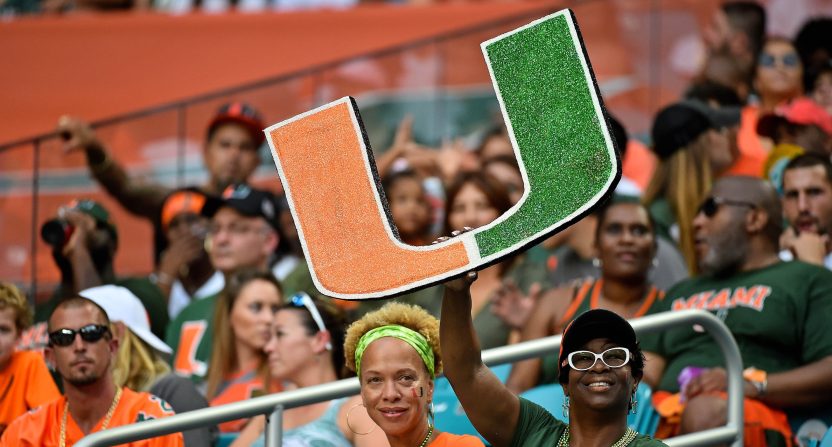 The writing has been on the wall for a few days now and it became official on Monday. The Miami Hurricanes fired Manny Diaz on Sunday evening to make room for Mario Cristobal, who is leaving his post with the Oregon Ducks to become the new head football coach there.

The coaching carousel has been particularly wild in the last couple of weeks, so all of this ends up being less surprising than you might think. However, it’s the financial numbers involved that seem to signal a whole new era for Miami football and college sports in general.

First, Miami is reportedly going to pay Cristobal $8 million per year over 10 years and give him the largest assistant coach pool in the ACC.

The deal Mario Cristobal signed with Miami this morning is 10 years, $8 million per season with significant investments for support staff, assistant coaches, recruiting. Miami will have the highest assistant coaching pool in the ACC, a source said. @TheAthleticCFB

That’s not all, however. Miami has also agreed to buy out Manny Diaz as well as cover the buyout in Cristobal’s Oregon contract.

Miami has never come close to paying this kind of money. This is a complete shift in athletics and football support.

That kind of upfront money is unheard of, even for a program like The U. Where is it coming from? In the most American of ways, it appears that a boom in Miami’s healthcare arms is helping to fund their football team.

Per Stewart Mandel, the Miami UHealth system made over $400 million in profits last year in the midst of a pandemic, and that, coupled with boosters who want to see the Canes return to form, makes it easy for the school to make this wild investment.

The reaction to that development is, well, interesting.

Imagine being a Frontline worker in U Miami's healthcare system and seeing that you made so much money they decided to pay for a new football coach when they could have given it to employees.

i for one am glad that miami's insane healthcare profits during an unprecedented global pandemic that particularly ravaged florida is being used for things like this https://t.co/T9j0NyVZBL

“we can use the cash from the extremely profitable hospital to buy a better football coach” man what a messed-up world https://t.co/QvdA3rG3m7

It’s true that there is perhaps no better summation of America than taking the profits earned during a pandemic and using them to make your football team better. That it’s the school that was involved in multiple booster scandals over the years is simply icing on the cake.

But if Cristobal is able to elevate Miami back to national prominence, you won’t hear too many people in Coral Gables complaining about it. So it goes.