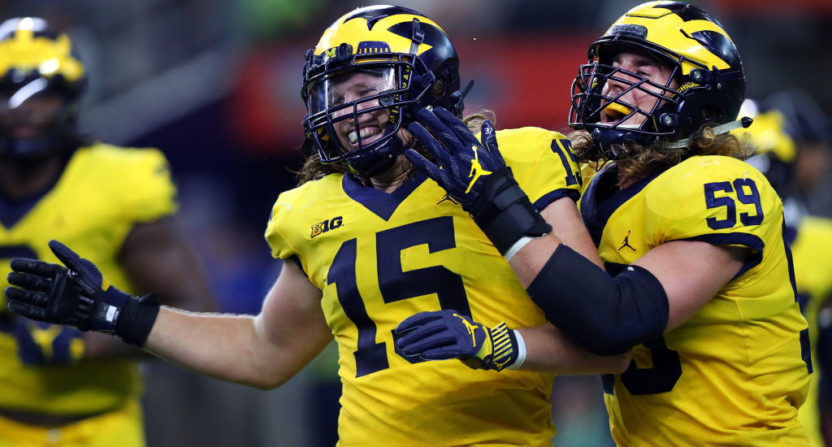 Replace 10 starters on defense, including eight picked in the 2017 NFL draft? No problem. Find new pass catchers to replace both starters (also picked in the draft)? No problem, either. The rest of the Big Ten looking at Michigan’s paddling of Florida? Big problem, for sure.

Things really couldn’t have gone much better for the Wolverines in their 16-point win over the flaccid Florida Gators, which was probably a lot less close than the score indicated. Absent a positive first drive that resulted in a field goal, the rest of the day for Florida resembled Walmart the night before Christmas and scores of people trying to get their last-minute shopping in.

Michigan rushed for a staggering 204 yards more than Florida (215-11) and outgained the Gators by nearly 300 yards, holding the Florida offense to under 160 total.

In fact, Florida’s best (only?) offense was the Michigan offense, where Wilton Speight (more on him later) slung two pick-sixes before getting some pine time to think about his errors.

Truth be told, Michigan treated Florida (yes, depleted, but still) like a lower-tier Big Ten team as they basically lived every play in the Gator backfield the second the ball was snapped. It looked like what people used to crow about SEC teams doing to the Big Ten, only the roles were glaringly reversed.

There was palace intrigue about Michigan coming into this game. With a loud and proud off season, but having to replace so much talent, would the Michigan hype train immediately run off the rails, or was it all warranted?

It’s only one game, but while most of college football was running around scheduling sacrificial lambs to get a clean, easy W on the board to start the season, it’s impossible to ignore the thrashing the Wolverines handed out to a game SEC foe.

If games truly are won in the trenches, especially in the Big Ten (hint: they are), then Michigan sent a warning missile over the rest of the Midwest, letting them know that it’s going to be a knife fight if you’re going to get through these Wolverines, and that all those high level recruiting classes are more than up to snuff.

Running back Ty Issac thrashed through giant, gaping chasms in the offensive line to the tune of 114 yards on over 10 per carry. Rashan Gary and Devin Bush physically dominated anything Florida’s offensive line attempted to do.

Wilton Speight to Tarik Black for a Michigan TOUCHDOWN!!! pic.twitter.com/KtvkCdibZL

And then there was Speight, who was a story within a game. Whatever success the Maize and Blue go on to have over the course of the season, much of it can be laid at the response of Speight.

Many guys would have tucked tail (and truthfully, many coaches would have just shut down the Wilton Speight bus for the afternoon) after being pulled post-two pick-sixes. Even one is atop the “Cardinal Sins of Quarterbacks List.”

But after some uninspiring, if allegedly planned play from backup John O’Korn, Speight rattled back in the second half and led the Wolverines back to the front of the scoreboard and bled clock on long drives that ostensibly put the game away before it was salted away by a Chase Winovich sack-fumble of Malik Zaire that gave us the final result.

Replacing 18 of 22 starters, staring down the barrel of their own mistakes nearly giving the game away, having the world wonder if you’re for real or if there will be a painful break-in period, Michigan more than sent notice to the rest of the conference and even the nation. The Michigan bus is coming down the road, no brakes, full speed.