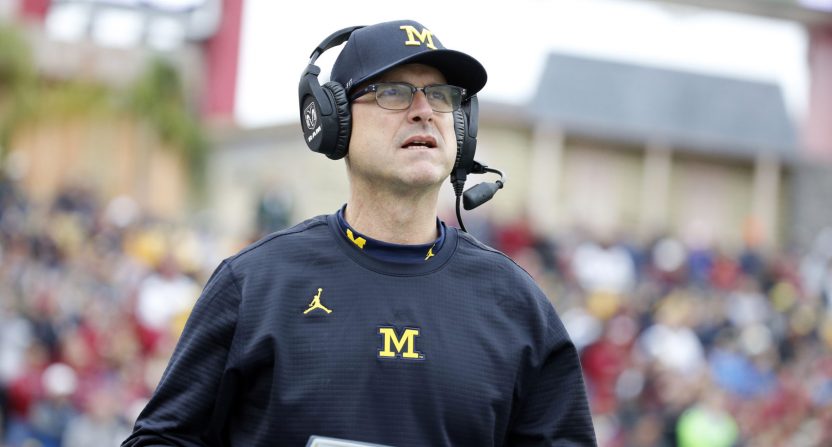 Michigan is not going to fire Jim Harbaugh. Any discussion about the current plight of the Wolverines’ football program and the job performance of its head coach should begin there.

But that doesn’t mean Harbaugh’s job status shouldn’t be heavily scrutinized right now. Michigan is slogging through a surprisingly bad 2020 season during which his football team has lost to a clearly inferior Michigan State squad, gotten blown out by Indiana and Wisconsin, and needed triple overtime to defeat Rutgers.

Thanksgiving weekend or the week afterward is typically when Michigan and Ohio State play their annual matchup. But this year, during the Big Ten’s COVID-19 delayed season, they won’t face each other until Dec. 12. As if the past two meetings didn’t already make it apparent that the Wolverines and Buckeyes aren’t on the same level — with Ohio State winning by a combined score of 118-66 — this year’s clash should make that starkly clear.

Right now, however, there’s no question which program is better. But grudgingly accepting that is one thing. Watching one of college football’s most celebrated names lose games they shouldn’t is entirely another.

Michigan State — with first-year coach Mel Tucker, who took the job in mid-February — was far more enthusiastic facing a predicted blowout, while Michigan could never match that energy. How does that happen? Sure, MSU has always been motivated to beat the in-state rival that always gets more attention. But under Harbaugh, Michigan often looks uninspired and tentative in such matchups.

Refusing to accept a need to change and adapt to what’s happening on the field and in college football as a whole has been the most baffling aspect of Harbaugh’s tenure. Defensive coordinator Don Brown and his aggressive blitzing approach suffocate lesser competition. But those schemes get ripped apart by creative play design, assertive playcalling, and superior athletes. After five seasons of the same results, it’s time for a new philosophy.

It took four seasons for Harbaugh to back off on the idea that his offense should run over opponents — like Michigan did for 25 years, including when he was playing quarterback — rather than run past them, as schools like Alabama, Clemson, and Ohio State now do. Yet even with Josh Gattis now running the offense, Michigan wobbles between power running and spread passing. Or gets too cute with Wildcat formations that never fool the defense.

The problem is that these aren’t new issues for Harbaugh and Michigan. This is his sixth season in Ann Arbor. At what point does the identity of “Michigan football” get established? When do performance and achievement match the high-profile of the Block M, winged helmet, maize-and-blue brand?

And now, Michigan is poised to have its worst campaign under Harbaugh. Sure, the roster has lost talent with injuries, some players leaving for the NFL, and others opting out because of COVID-19. Preparation likely also suffered while the Big Ten postponed the fall sports season. Yet that hasn’t affected Ohio State, Northwestern, or Indiana.

At best, the Wolverines will finish with a 4-4 record. Replacing Joe Milton at quarterback with Cade McNamara may salvage the season. The coaches finally couldn’t take Milton playing so poorly (after a promising debut) and had to acknowledge that the offense responded better to McNamara. (By the way, why did Dylan McCaffrey leave the program?)

But what about the bigger picture? Michigan football hasn’t improved under Harbaugh. And it increasingly appears that he doesn’t have the answers, that he’s not the savior Wolverines diehards — and college football fans — expected. The coach no longer looks like he’s attacking each day with enthusiasm unknown to mankind. Nor do his players.

Attacking this day with Enthusiasm Unknown to Mankind

It would’ve been nearly impossible to imagine that Michigan football’s favorite son would leave without lifting his school to perennial contention for national championships. Yet six years in, that seems to be the direction in which the program and its coach are moving.

Harbaugh’s contract expires after next season, a situation most college football powers would never let develop because of its recruiting consequences. Michigan and Harbaugh were reportedly close to agreeing on an extension until the pandemic cratered the athletic department budget.

But maybe that long pause has also left both sides to contemplate how much longer this relationship should continue. Michigan is surely happy with the revenues, players’ academic standing, lack of off-field scandals, and the high national profile Harbaugh brings. However, that also now comes with questions regarding why he hasn’t been more successful.

Jim Harbaugh was asked about his contract situation today. He said there are "bigger fish to fry."

Asked what his message to recruits would be re: contract, he said, "Go Blue." pic.twitter.com/4iG35u3cSt

Even if he hasn’t restored Michigan to glory, perhaps Harbaugh feels that he’s taken this thing as far as it can go. This is the longest stay he’s had among his four head-coaching stops. He might be ready to try something else.

The constantly rumored return to the NFL could become reality with the Chicago Bears, for whom he played. The New York Jets, Los Angeles Chargers, Atlanta Falcons, Houston Texans, and Jacksonville Jaguars could have openings too. One of those clubs could have the right fit with a general manager that could work for him.

A frequent retort from Michigan fans who question whether Harbaugh should be replaced is whether or not the right coach is available. But that guy can be found. It shouldn’t be viewed as some kind of obstacle toward making a change.

Meet Matt Campbell, the young coach who has Iowa State near its first league title since 1912. His unconventional methods include building bonds so close to his players they openly make fun of him. Is he a glimpses of the future of coaching?https://t.co/JKIQ2flXqR

Iowa State’s Matt Campbell has become a popular choice for his ties to Ohio and experience recruiting the Midwest. Stanford’s David Shaw has experience coaching major conference football at a school that emphasizes academics. Mario Cristobal is looking for an extension and raise from Oregon, and could get that larger salary at Michigan. What about UCF’s Josh Heupel and the innovative offense he developed at Oklahoma?

Cincinnati’s Luke Fickell and Northwestern’s Pat Fitzgerald will be mentioned, but they won’t go to Michigan. (Fitzgerald already turned down an interview in 2011.) Some moonshots like Mike Tomlin or Sean Payton (whose name came up before Harbaugh was hired) will get tossed into the discussion too. Should former Oklahoma coach Bob Stoops go in that category as well?

Urban Meyer? Come on, man. Once upon a time, maybe when he was at Utah, Meyer would’ve taken the Michigan job. But not after coaching Ohio State and dominating Harbaugh.

Again, Michigan will not fire Harbaugh. That’s not how the football program and athletic director Warde Manuel want this story to end, by embarrassing an iconic figure in school history. But if Harbaugh wants to leave, the parting can be amicable and finish on good terms.

Everybody tried. Michigan thought it had the right guy. But his return turned out to be a fairy tale. It hasn’t worked out. Both sides need to move on.