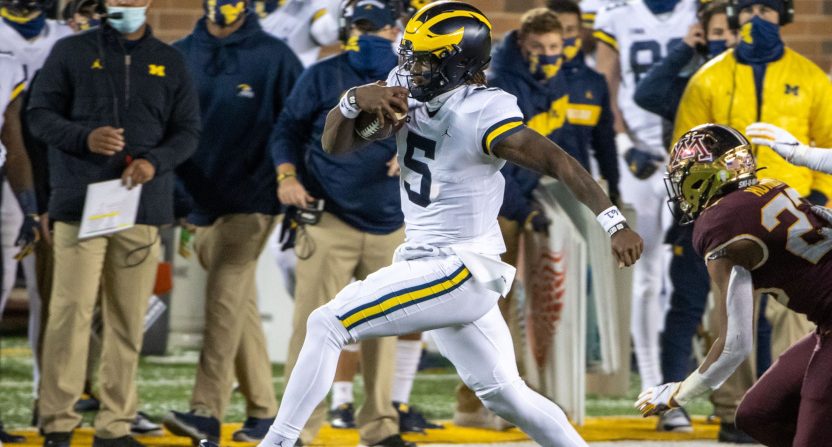 One of the biggest issues Michigan football has battled in the Jim Harbaugh era has been the lack of a game-changing quarterback. Watch out, Big Ten: Michigan may have that issue resolved in 2020.

Joe Milton (seen above) made his debut as Michigan’s starting quarterback on Saturday night as the Wolverines traveled to Minnesota for a Big Ten opener in primetime. Michigan opened the season with a statement in the form of a 49-24 victory against a Gophers squad widely expected to be in the mix for the Big Ten West Division in 2020. And while Milton didn’t have quite the debut as Wisconsin’s Graham Mertz on Friday night or match the efficiency Ohio State’s Justin Fields demonstrated earlier in the day, he did give Michigan fans plenty of reason to believe maybe, just maybe, this year could be different for the Wolverines.

For a guy that has drawn some comparisons to former Auburn Heisman Trophy-winning quarterback Cam Newton, it may not have been a surprise to see some similar play-calling at work.

Michigan is running some of the exact same designed runs for Joe Milton that the Patriots have run with Cam Newton this year.

One of the biggest questions facing Michigan was the ability of the offense to take its next step. If the first game of the season was any indication, offensive coordinator Josh Gattis could have this offense ready to hum.

Josh Gattis' offense has been really impressive. His gifted young QB Joe Milton has backed up the hype tonight. #Michigan's averaging a gaudy 9.4 yards per carry and 9 yards per play. Wolverines also have scored five TDs in six Red Zone trips. Not bad.

I don't know what happens with Joe Milton the rest of the season, but Michigan's offense looks way more under control and confident than it did in the first half of last season.

It was just one game, but it was a heck of an inspiring game for Michigan. Now, the big challenge will be to prove this was not a fluke. Michigan will have a good chance to keep this rolling next week when Michigan State comes to Ann Arbor. The Spartans lost their season opener at home to Rutgers.