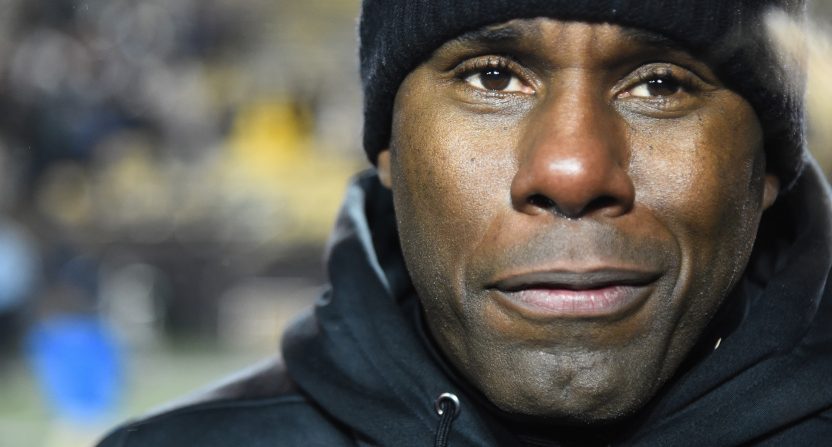 The killing of unarmed black man George Floyd in police custody Monday and the handling of that by local officials (Derek Chauvin, the police officer, who knelt on Floyd’s neck for nine minutes, was only charged with third-degree murder Friday) has led to outrage from everyone from police chiefs to athletes to entertainers to sports media figures, and there are now growing numbers of college football coaches speaking out about it. Here are a few of the notable ones, starting with a thread from Vanderbilt head coach Derek Mason (pictured above):

I’m truly saddened by the state of affairs that caused the death of George Floyd. I’m also aware of the growing tension in cities across the country regarding the issue.

When tragedies such as this occur, people are quick to take a side, but in reality there is truly only one truth here – a gentleman lost his life and that loss could have been prevented.

Only to find that following the rules can sometimes not be enough to keep yourself alive. It’s a confusing dilemma to black men, which breeds anger and mistrust because the rules to this game keep changing.

Empathy takes no talent, just the free will act of compassion.

You may not be capable of walking in someone else’s shoes, so don’t. Listen to the issue and walk alongside them to get it right.

If anything is truly going to change, then we all must stand together peacefully to make sure that we stop trying to say who is at fault and find a way to get it right.

The cost of getting it wrong has become increasingly too expensive.

And there are plenty of other coaches also offering their thoughts here. Miami’s Manny Diaz referenced a conversation with Coral Gables police chief Ed Hudak, and said he stood with Hudak in condemning Floyd’s death:

Thanks to @CoralGablesPD Chief @ehudakjr for speaking to our team today about ACCOUNTABILITY & JUSTICE. We stand together in the condemnation of the actions of the officers that led to the death of George Floyd while under custody. #JusticeForGeorgeFloyd
✊🏻✊🏼✊🏽✊🏾✊🏿 pic.twitter.com/pZejdbnzqn

Minnesota head coach P.J. Fleck, whose team has been in the news thanks to the university’s decision to “limit ties” with the Minneapolis police department (including no longer contracting them for football games), also offered a statement here:

My heart is broken by what is going on in our country. Racial injustice is wrong and it MUST be addressed!! I Believe we are to LOVE EACH OTHER! No matter one’s skin color. Love is a choice. Our prayers are with George Floyd’s family. John 15:12 #LEO

Northwestern’s Pat Fitzgerald called for everyone to speak out:

Silence at a time like this is unacceptable, and complicit, especially from those who are privileged. Racism cannot be ignored. We can be better. We MUST be better.

We ALL have a responsibility if we’re going to fight systems of oppression.

And Maryland’s Mike Locksley said this should never be normalized:

As so many of us have seen and felt, I deeply hurt for the injustice we have in our country. We must find a way to treat each other the way we want to be treated, with unity and respect. As a nation, we must overcome it. And we must begin now. 🙏

Those are just a few of the many coaches’ comments out there about this. More can be seen in this collection by Zach Barnett at FootballScoop.