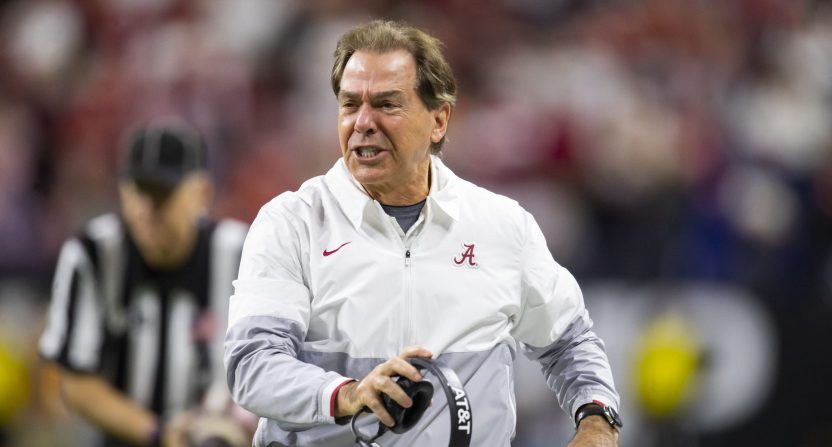 Anyone who thought Alabama coach Nick Saban might back off somewhat after his comments on name, image and likeness (or NIL) deals was mistaken.

Saban was back at it on Wednesday with more comments about NIL deals and some of the colleges to sign players to them — specifically Texas A&M and Jackson State.

Nick Saban says 25 players on Alabama last season earned NIL revenue totaling $3 million and did it “the right way.” Saban speaking at a 50-day countdown event for the World Games in Birmingham.

Saban: We were 2nd in recruiting last year. A&M was first. A&M bought every player on their team. Made a deal for name, image and likeness. We didn’t buy one player. But I don’t know if we’re going to be able to sustain that in the future because more and more people are doing it https://t.co/uwEcLQa2u4

More from Nick Saban tonight: “Jackson State paid a guy a million dollars last year that was a really good Division I player to come to school. It was in the paper. They bragged about it! Nobody did anything about it."

The comments about Jackson State, in particular, caught the eye of several college football fans. Notably, there’s one important question that lingers. What will the relationship be like between Saban and Jackson State coach Deion Sanders when the next set of Aflac commercials is filmed?

Them Aflac commercials finna be a fool https://t.co/5vNEBKDgAQ

Hey @DeionSanders I think you better bring @danabeers to the next @Aflac commercial shoot so the word can see his apology for spreading debunked rumors. https://t.co/ffEiTXZ6q5

Saban snitching on Deion? Things might get tense on the Aflac set https://t.co/ixMHUz1X3s

Those Aflac commercials about to be awkward… https://t.co/w9GSaanAkY

There’s another lingering issue that goes beyond the potential awkwardness that may exist on the Aflac commercial sets.

Not even one week before these comments, Saban expressed a desire to see NCAA Football return to parity. Ignoring, for a second, that NCAA Football has historically had less parity than any other major American sport — college or professional — if Saban wants parity, why is he complaining about other schools getting top talent?

Texas A&M has some wins against Saban’s Alabama teams but the program has never been on Alabama’s level in Saban’s era. Jackson State certainly isn’t close. It’s not even a Division 1 program. If Saban wants parity, isn’t seeing top players going to those teams a good thing?

Given all of that — and that Alabama will certainly do fine with NIL players — college football fans were highly critical of Saban’s most recent comments.

It’s becoming more and more apparent that certain coaches are like the bootleggers that got mad when prohibition was ended. https://t.co/FGQjARfLVx

Nick Saban must have not watched his players IG stories for the last 10 years. https://t.co/h37IvqGuV4

This is funny coming from the highest paid employee in the state of Alabama…I’m sure Bama will end up close to the top if you total all the deals…they just don’t like a more level playing field https://t.co/VnoPjnwmKV

Nick. Sit this one out dawg. I know all those dodge chargers at the practice facility didn’t appear out of thin air https://t.co/3ahdYGRiM2

Ain’t no fun when the rabbit got the gun. https://t.co/0hEEthKt8b

There’s something beautiful about watching someone who is used to getting their way all the time completely unravel when they don’t get their way. https://t.co/8oe19gr7Yh