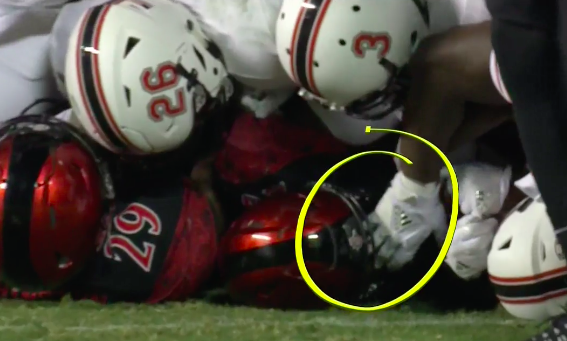 Rashaad Penny is a running back who most college football fans have heard of, even if they don’t know precisely who he is. Seeing as he’s a running back in a Group of Five conference who’s played most of his games for San Diego State well after the east coast has gone to sleep, that’s saying something.

Penny is a darkhorse Heisman candidate and has put up some incredible numbers for the Aztecs, including in their upset victory over Stanford a few weeks ago. He’s both powerful and explosive to the hole, and his shiftiness in the open field make him hard to track down.

Northern Illinois linebacker Antonio Jones-Davis tried for an unorthodox manner of stopping Penny — he went for an eye gouge while Penny was on the ground and got away with it. If Penny can’t see, he can’t play and if he can’t play, he can’t run all over Northern Illinois. Penny had already scored a touchdown on his first touch (a 33-yard reception) of San Diego State’s first drive.

This attack is vicious and has no place whatsoever on a football field — or anywhere else, for that matter. Jones-Davis clearly sees where Penny is and the attack is very deliberate. He even adds fingers once he sees Penny’s eyes are vulnerable. Penny left the game with a swollen eye and missed several series before returning — this time with a visor in his facemask.

Jones-Davis wasn’t ejected from the game, but hopefully Northern Illinois or the MAC  — or both — swiftly hands down a suspension worthy of this vicious act.