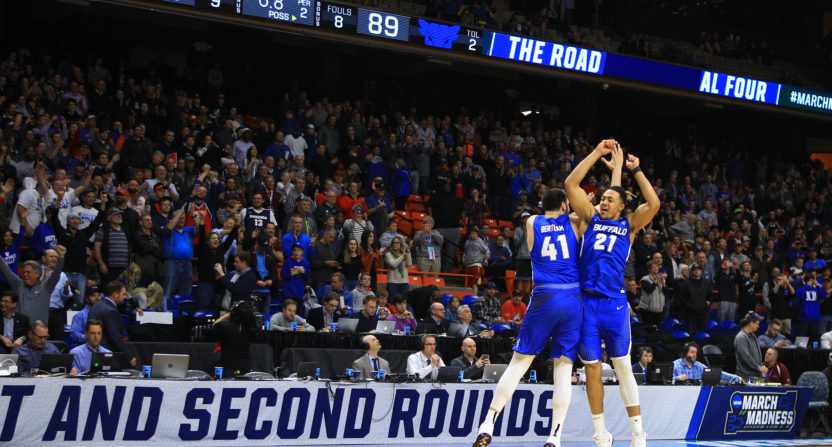 The No. 13-seed Buffalo Bulls didn’t just upset the the No. 4-seed Arizona Wildcats during first round action of the NCAA Tournament on Thursday night in Boise. Buffalo *destroyed* Arizona, 89-68.

Arizona was a trendy Final Four pick, with dummies like yours truly and Skip Bayless even picking the Wildcats to win the whole damn thing. And the idea didn’t seem as crazy as it obviously looks now, with Arizona having college basketball’s most dominant player in Deandre Ayton (the likely No. 1 overall pick), as well as star guards Allonzo Trier and Rawle Alkins. From an on-paper talent perspective, Arizona is right there with any team in the country, and it looked like it was coming together for the Wildcats as they dominated the PAC-12 Tournament.

But, hoo boy, Buffalo — a MAC representative — certainly looked like they were the heavily favored team in this game. Buffalo took a 40-38 lead into halftime, and most viewers probably figured Arizona would still turn it on in the second half and win comfortably. Instead, Nate Oats’ Bulls squad outscored Arizona 49-30 in the second half, and the game was basically over with 10 minutes left.

Jeremy Harris is FEELING IT as the Bulls take a commanding lead! ???#MarchMadness pic.twitter.com/fN0ukdr6p5

Buffalo had three players — Wes Clark with 25 points, Jeremy Harris with 23 points, CJ Massinburg with 19 points — outscore Arizona’s entire team. Ayton was limited to 14 points (though he did pull down 13 rebounds) and Buffalo’s defense did an excellent job to prevent him from getting looks in the paint (granted, Arizona did a poor job of getting him the ball too). The most eye-opening statistic came in the three-point shooting department, where Buffalo hit 15-of-30 threes and Arizona went a brutal 2-of-18.

Oh, and this was Buffalo’s first-ever NCAA Tournament victory. It’s a program-changing win for Buffalo.

And this loss, to go with the well-documented FBI investigation, could be a program-sinker for Arizona’s near future in college hoops.

Twitter had plenty of clever tweets and jokes reacting to Arizona’s embarrassing loss.

Between the FBI ensnaring USC and Arizona, UCLA's international incident in China and the disastrous on-court performance, the Pac-12 has just completed the worst basketball season ever for a power-six league

Live look at Arizona fans trying to figure out if they should still keep defending Sean Miller pic.twitter.com/KgeM9JObbd

A friend just text me: Man, Arizona lost by Ayton of points.

The moment Arizona was doomed https://t.co/riKPZf07GQ

Pac-12 is about to finish a combined 1-11 in bowl games and NCAA tournament. Utah’s bowl win prevented the shutout.

Can’t get tournament wins vacated if you don’t get any. #Arizona pic.twitter.com/lizBOViRXY

Arizona couldn’t buy itself a basket there.

I’ll see myself out.

This might be worse for Sean Miller than the FBI probe.

I hope Sean Miller kept enough cash to get an early flight home.

A look at everyone coming back to Arizona next year: pic.twitter.com/bgBFsh4fgq

As for Buffalo, they get to keep playing, and will look to pull off another upset when they take on No. 5 seed Kentucky on Saturday night in Boise.