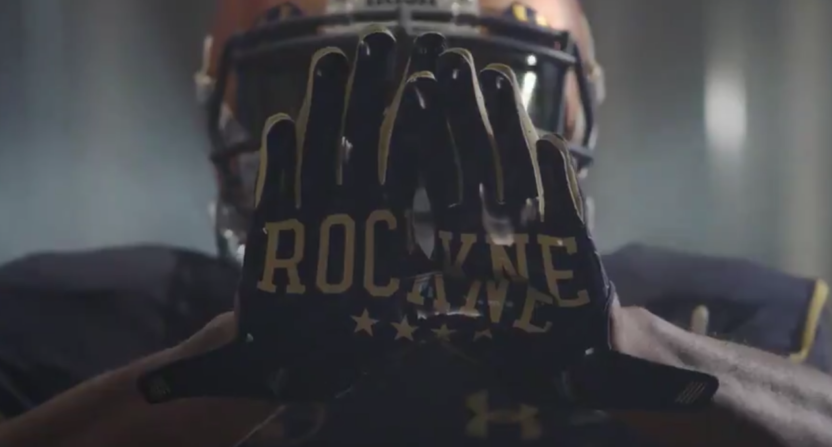 When Notre Dame football does things, they usually like to do it big. That means high-profile neutral site games, prime time television slots, and especially uniforms.

The school often breaks out an alternate uniform each season for the Shamrock Series. This season, even though there isn’t a game that fits that description, they’re still going to break out some fresh unis, knowing full well that people are either going to love them or hate them (usually the latter).

Well, get ready to love or hate the alternate uniform the team will don against Navy in their home finale on November 18. The theme this year? Honoring Irish coaching legend Knute Rockne.

On November 18th, we come together to honor the man who built it all.

The Lid.
The Speech.
The Titles.
The Kicks.

Take a look at some of the details from our ROCKNE Heritage Uniform.#GoIrish pic.twitter.com/mDNRZvpuhs

In a statement, Under Armour design director Nick Billiris said that the special uniform “is a unique opportunity with this uniform to celebrate the past while creating the future. To do so, the company incorporated elements that call back features from Notre Dame uniforms in the 1920s and 30s when Rockne was elevating them into the premier college football program.

Among those features is a leather strap pattern running around the helmet to harken back to the football helmets of old. There is a little bit of a Michigan helmet effect going on, but they’re hoping you overlook that.

The shoes that go with the uniform showcase a vintage leather vibe with a zigzag pattern to add some boldness.

Other touches include three stars across the back of the neck to denote Rockne’s three national titles as well as an infamous Knute Rockne inspiration quote embedded on the sleeves.

Irish eyes appear to be smiling so far with the look. Ultimately, whether or not they win the game in these uniforms is what will keep everyone happy.