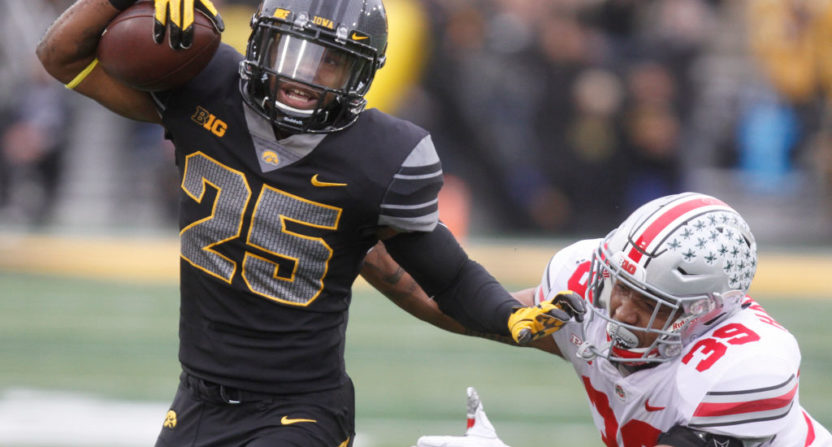 Ohio State entered Saturday in pretty solid shape to make its third College Football Playoff in four years. The Buckeyes ranked No. 6 in the CFP rankings, were coming off a dramatic win over then-No. 2 Penn State and entered a clash at Iowa as 17.5-point favorites.

And then, in the most shocking outcome of this week, if not this season, No. 6 Ohio State was clobbered in every facet, falling to the Hawkeyes 55-24.

The loss is easily one of the worst of the Urban Meyer era in Columbus. The Buckeyes didn’t just lose, they got smoked, allowing 487 yards and committing three turnovers. They didn’t fall to a national title contender, they got beat by a 5-3 team. And they didn’t just add an L to their record, they tumbled straight out of the CFP picture.

The most shocking element of the loss was the play of J.T. Barrett, who arrived at Kinnick Stadium as a Heisman contender who had gone two months without an interception and left as the object of Buckeye fans’ resentment. That’s what happens when you complete only 18 of 34 passes for 208 yards and throw four picks, including a pick-six that set the tone for a blowout loss.

Ohio State kept pace with Iowa early, overcoming that early interception to wind up tied at 10 after the first quarter. Then the Nathan Stanley show began. The Iowa quarterback threw three scores in the second quarter to lead the Hawkeyes to a 31-17 halftime lead. He would end up with 226 yards on 20 of 31 passing and five touchdown passes.

You knew Iowa was really feeling itself when it pulled a trick play straight out of JV ball:

If you've been asleep the last two hours, heads up: @HawkeyeFootball is up to somethin'. ?

They've got No. 6 OSU down THREE SCORES: pic.twitter.com/LUpcuEAISY

That stunt led to perhaps Stanley’s best play of the day, an under-duress touchdown pass that gave the Hawkeyes a three-score lead late in the third quarter.

By the fourth quarter, the Hawkeyes had seemed to crush the Buckeyes’ spirits. Iowa scored the first 10 points of the period, and after Ohio State added a late touchdown, the home team scored once more to top off a 55-24 rout.

With the loss, Ohio State is now 7-2 overall with an extremely difficult road to the Playoff, made only a bit easier by Penn State’s loss to Michigan State on Saturday. For the Buckeyes to finish in the top four, they’ll have to handily beat Michigan State and Michigan, then take down Wisconsin in the Big Ten title game, then cross their fingers that the CFP committee finds room for them, amid a deep feel of contenders.

And if the Buckeyes do, in fact, fall short of their goal, they’ll look back on Saturday’s humiliating loss in Iowa City as the biggest reason why.