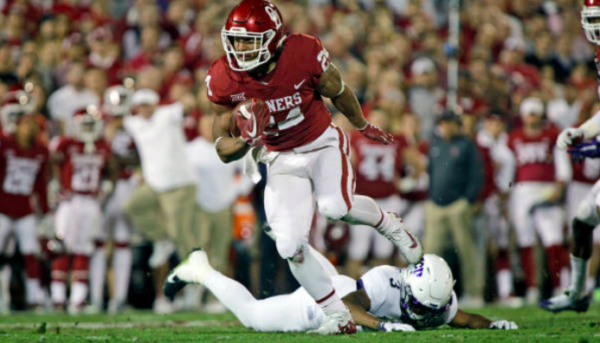 In six Big 12 conference games leading up to this weekend, the Oklahoma Sooners hadn’t given up fewer than 24 points in a single game, and that was against Texas’s woeful offense. Oklahoma’s conference opponents averaged 37.5 points per game against the Sooners. That all changed on Saturday as Oklahoma shut down Kenny Hill and the TCU Horned Frogs to take sole possession of first place in the Big 12.

Baker Mayfield cemented his Heisman résumé in the process, throwing three touchdown passes and for over 300 yards. The Sooners did all of their offensive damage in the first half, including a late touchdown that really felt like the early dagger in this game. Oklahoma took a 38-14 lead into the break, and the only points in the second half were on a fourth-quarter touchdown by TCU.

Coming into tonight opposing QBs had completed just 49% against TCU's D. Baker Mayfield hit on 67%, threw for 333 yards & the OU offense put up 533

Baker Mayfield is still looking like he's going to break his own Passing Efficiency record of 196.4. He's at 202.1 on the season.

Earlier in the day, Oklahoma State won a thriller against Iowa State. The Cyclones had already beaten both Oklahoma and TCU this year, and therefore controlled their own Big 12 destiny. Iowa State led for half of the fourth quarter in this game, but didn’t quite have enough to put away the Cowboys. Mason Rudolph led the high-powered offense on two touchdown drives in the final quarter to take the win, effectively ending the Cyclones’ dreams of a Big 12 championship.

There are still a ton of scenarios in this conference, most of them highly unlikely. In fact, it is still technically possible for us to see a six-way tie for the Big 12 title, with Oklahoma, TCU, Oklahoma State, West Virginia, Iowa State, and Texas all finishing at 6-3 in-conference. (That scenario won’t play out, but if it does then Oklahoma and TCU would be the Big 12 Championship Game participants.)

For all the scenarios, though, we are very much on track for a TCU vs Oklahoma rematch in the title game. Those two hold all of the tiebreakers, should tiebreakers be necessary. TCU’s final games are against Texas Tech and Baylor. As long as the Horned Frogs win both of those, they will be playing on December 4th. Oklahoma, meanwhile, has an easier path to the Big 12 Championship Game. The Sooners will lock up a spot in the game with a win next week at Kansas. And even if the Sooners miraculously lose that (they won’t), the would still earn a berth by beating West Virginia the following week.

This weekend was very good for the Sooners. Georgia’s loss all but eliminates the possibility of a two-bid SEC–or at least, an SEC with two teams ahead of Oklahoma. Notre Dame’s beatdown at the hands of Miami erases the concern that the Irish will slip into the Playoff ahead of the Sooners. Washington’s loss means that the Huskies are firmly behind the Sooners, though that was likely true before the weekend began as well.

Coming into this week, Oklahoma knew that if it win out, it would likely be in the Playoff. Right now, the Sooners know that if they win out, they should definitely be in the Playoff. There just aren’t enough teams ahead of them with good resumes. The win over Ohio State looks much better once again, and the win over Oklahoma State gained more value this week. Add in two wins over TCU, plus a win over a possibly-ranked West Virginia team? That resume is a lock.

Outside of Oklahoma, though, the conference has it a bit rough. TCU’s only ranked win is over Oklahoma State. Maybe West Virginia ends up ranked, and the Mountaineers are certainly a win of decent quality, but that probably won’t be enough to get in with two losses. The nonconference win over Arkansas isn’t living up to what was hoped, and the win over SMU has lost a lot of luster these past few weeks. A win over the Sooners in the Big 12 Championship Game probably won’t be enough of a boost for this resume. Unless we get a ton more chaos in the coming weeks, it’s Oklahoma or bust as far as the Big 12’s Playoff picture is concerned.