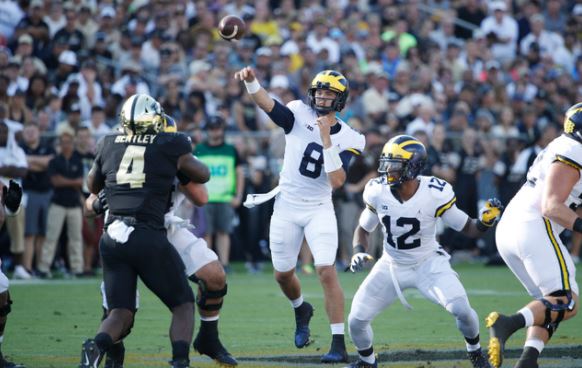 Every groundbreaking transition starts with an insignificant moment that you look back on and say, ” I shoulda seen it coming.”

Early third quarter, with Michigan’s football team running in thick mud with flip flops on, backup quarterback John O’Korn (JOK from here on out) was dead to rights in the backfield until he channeled his inner Michael Vick, stayed alive, and struck a first down pass that seemed like pure luck for the trailing Wolverines.

No lie, I turned to my new sister-in-law and said, “that play is gonna give him the confidence he needs, get the juices flowing.”

Fast forward about 90 minutes, and then 7-10 trailers staring-down-the-barrel-of-an-upset Michigan had dispensed plucky Purdue by a 28-10 margin and found themselves a quarterback in the process.

If Michigan wants to win the Big Ten and perhaps anything more, JOK needs to be the guy going forward. Sorry. It had to be said. There is no quarterback controversy after this one.

O’Korn’s presence in Michigan has been one of much hype, little delivery up until Saturday in West Lafayette. After throwing for over 3,000 yards and 28 touchdowns at Houston as a freshman, he was the next big stat-piling machine at a place that piled up numbers weekly.

But year two was marred by injury and benching, and when JOK transferred to Michigan to play for Jim Harbaugh, it was just assumed the guy who ran roughshod as a freshman would be back.

Yet, it never has been that way… up until Saturday in a must-win spot.

After his first touchdown pass, which put the Wolverines ahead by a 7-0 spot, he hollered at the man who benched him in Houston, one Tony Levine, now on Purdue’s staff. Call it retribution. Moxie. Or at the time, a little over-bravado since Purdue would march down the field directly afterward and tie the game, then take a lead after JOK threw a pick.

The one bugaboo for Michigan thus far has been any semblance of a passing game. Some of that is attributed to young receivers, a young offensive line, and a schedule that hasn’t allowed for one of those 56-10 beatings that gives everyone confidence. Wilton Speight has been serviceable, but not electric. O’Korn, in random stead, has been uninspiring as well.

Much will probably be made over the next two weeks about what the Wolverines are to do under center. There is no question. O’Korn has to be the guy. He showed a different side, not having to worry about when he was going to be pulled. He flashed the leadership, athleticism, and playmaking ability that will be a CFB Playoff level problem for other teams if he keeps it up, what with that Michigan defense.

Rarely do you see a playoff contender willingly switch quarterbacks at this part of the season (by the way, it’s 33 percent over). But Michigan found something far more than a win in pepped up West Lafayette on a late Saturday evening.

They found the one thing they desperately needed to win the Big Ten, one that seemed a bit far fetched until that sack avoidance play in the third where O’Korn got up and looked as if to say inside, “oh, NOW I remember how to do this.”

1 thought on “Children of the O’Korn: Michigan found its quarterback in win over Purdue”