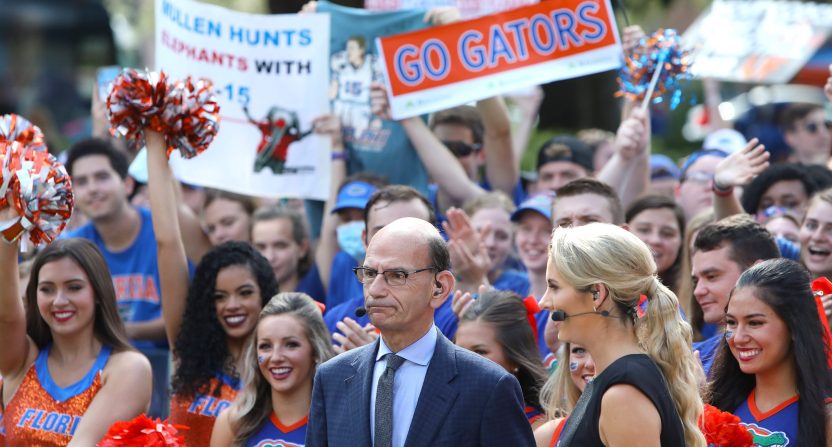 At the University of Kentucky, basketball has always been the sport the school was most associated with. John Calipari reiterated this statement over the weekend after complaining about his team’s practice facilities, slighting the football program and head coach Mark Stoops in the process.

With Calipari’s comments being one of the biggest stories in the SEC this past week, it was only natural the voice of SEC Football, Paul Finebaum shared his thoughts on the feud between Stoops and Calipari.

During an appearance on the radio show McElroy and Cubelic in the Morning Monday, Finebaum didn’t parse his words, claiming that no matter how successful or historic a school’s basketball program is, the big-time money is in football.

“He might because sometimes I think you can be delusional in the moment,” Finebaum said. “And listen, I don’t need to explain Kentucky basketball. But you and I understand in 2022 when billion-dollar deals are being made across the board, it’s about football. It’s not about basketball. You might have legitimately been able to have heard Mike Krzyzewski say a year ago that we’re a basketball school. But even at Duke today you probably couldn’t make that statement and you certainly can’t make it at Kentucky.”

Finebaum may have a point. Although Kentucky’s football program will likely never make a College Football Playoff appearance, they’ve had multiple 10-win seasons under Stoops and have held their own in one of the toughest conferences in college football after being a perennial doormat for in the SEC for years.

As for the basketball team, Kentucky has had a string of disappointing seasons, with the team missing out on the NCAA Tournament altogether in 2021 and losing to mid-major school St. Peters in the first round in 2022.

With this in mind, Finebaum suggests that it may be time for the leading brass at the university to make a change from Calipari.

“It is the biggest story in the SEC right now because it came out of left field and it came at a time where we should’ve been celebrating Kentucky basketball. They had the stage to themselves, four days in the Bahamas and Calipari blew it. Quite frankly, I don’t know where he goes to get it back. Just listening to our audience, and we have a lot of Kentucky fans that call in, they’re very mixed on him right now.

“I mean are you guys telling me you can’t find a coach better than John Calipari right now? Billy Donovan? I’m just throwing a name out there. A young coach who is up-and-coming? Take your pick. John Calipari is really no longer the best option for the University of Kentucky.”

Calipari has already been facing some pressure from Big Blue Nation the past few years and his latest comments in the wake of football season seems to have added even more fuel to the fire among fans and the media.