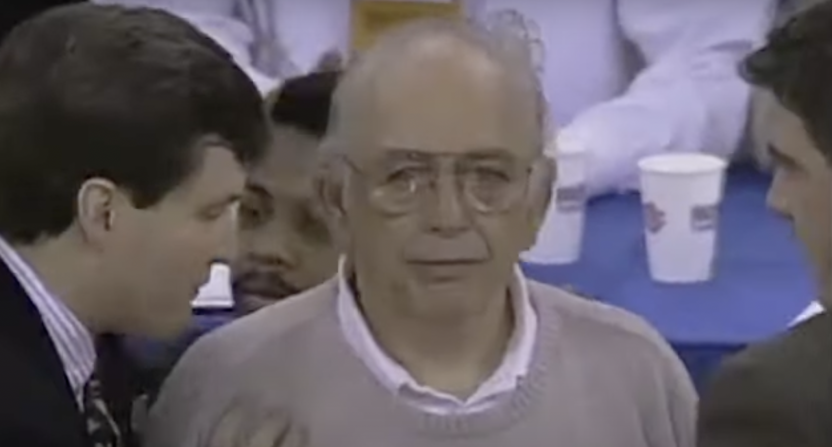 Pete Carril, who spent 30 years as the head coach of the Princeton Tigers men’s basketball team and made the “Princeton Offense” famous, has died at the age of 92.

“The Carril Family is sad to report that Coach Peter J. Carril passed away peacefully this morning,” the Carril family said in a statement released by Princeton University. “We kindly ask that you please respect our privacy at this time as we process our loss and handle necessary arrangements. More information will be forthcoming in the following days.”

A Statement From The Family Of Pete Carril.

What Carril lacked in player talent, he made up for by installing a deliberate, slow-moving offense that showcased backdoor cuts and proficient passing. His coaching prowess led the Tigers to 13 Ivy League titles, an NIT championship in 1975, and 11 NCAA Tournament berths where they were routinely considered a dangerous opponent for any high seed.

Pete Carril could coach the hell out of a back door cut. Would make watching teams score 40-50 points fun.

Carril served as an assistant coach with the Sacramento Kings three different times before finally retiring in 2011.

The basketball world was quick to offer its condolences and kind thoughts to Carril and his family on the news of his passing.

On the short list of greatest coaches, and characters, the college game has ever known. https://t.co/6VB7O2xssX

Pete Carril won 514 games at the D-I level, made 11 NCAATs and won an NIT without a single player on scholarship. And one of the few coaches with a legitimate patent on a style of play that was emulated at all levels.

He holds a special legacy in hoops that won't be duplicated.

RIP to a man who changed basketball, and who changed the lives of so many — including mine — for the better. Thanks Coach. https://t.co/fcjKOqYa32

Am very saddened to hear that the One and Only Pete Carril has passed. We are talking about a true American Original.

I believe that in defining greatness in coaches u must determine if they get maximum out of their TEAM personnel . PETE CARRIL is a prime example of a brilliant coaching mind that got max out of his talent . May Coach RIP ! @ESPN App https://t.co/8kHMczqUWD

Famed for his run at Princeton — and likewise beloved throughout his years as an assistant in Sacramento with some incredibly successful and ultra-watchable Kings teams — Pete Carril passed away today at 92. One of the true giants and true gents from the world of coaching. #RIP https://t.co/kgVdPH8RD8

This is one of the great basketball books ever. No “X’s and O’s” but fun, common sense basketball insight. If you are a fan of the game, please order & read this. My favorite Pete Carril line from the book was, “Never recruit a kid with a three-car garage.” RIP, Coach. 🙏🏻🏀 pic.twitter.com/EyV54K5mRV

Thank you to the ⁦@Princeton⁩ , ⁦@PrincetonMBB⁩ and especially the Carril Family for letting ALL of us watch, study and take from Coach Pete Carril His players and coaches were truly blessed and the rest of us were fortunate to see his brilliance and creativity pic.twitter.com/dDx5aaEjd8