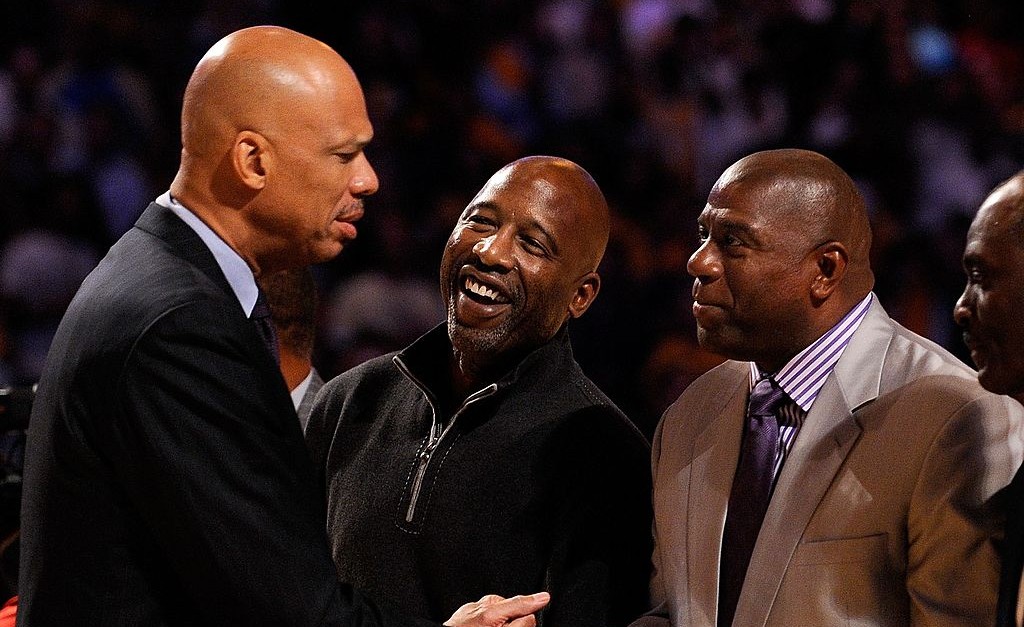 Success in college doesn’t always equal success in the NBA. We’ve seen scores of players who obliterated their collegiate competition fizzle out when they get to the major leagues. In fact, the list of players who have reached the highest level of success in both college and the pros is strikingly small. Some players on the list are amongst the best of all time, while others are…Mario Chalmers. In honor of the Sweet 16, we ranked the 16 best players who have won an NCAA and NBA championship. There are some surprises, to be sure.

Yes, the list of players who have won both titles is so slim that Mario Chalmers is in the top 16. James Worthy is surely the most notable on this list, given his role for Dean Smith’s North Carolina title team and the Los Angeles Lakers. Still, there are eight players who are more…deserving of consideration.

The next Celtic on our list (yeah, we probably should have warned you, there are quite a few Celtics here. What can we say, they knew how to draft), Cousy was one of the first iconic point guards in the NBA. Mock his set-shot all you want, but Cousy was deadly with it, and could get just as fancy with his passes then as Ricky Rubio does now. Cousy won six championships with the Celtics, including five straight from 1959-1963. You can’t argue with those results.

In college, Cousy played point for Holy Cross, and led them to the title in 1947. That championship almost never happened, though. According to NBA.com, Cousy was so frustrated with his lack of playing time during his sophomore year that he nearly transferred from the school. Fortunately for him and Holy Cross, he was convinced to stay. Cousy was rewarded for his patience his senior year, when his coach finally let go of the reins.

Yet another Celt—ha! Gotcha! We’re actually talking about the original IT, who spurred the Indiana Hoosiers to the title in 1981 while being named the tournament’s most outstanding player. Thomas was one of the most decorated college players that year, as he was also a consensus first-team All-American.

After a few years battling in the brutal Eastern Conference playoffs, the Thomas-led Pistons finally broke through in 1989. Thomas and the rest of the Bad Boys — which included the likes of Dennis Rodman, Joe Dumars and Bill Laimbeer — won in ‘89 and then the next year in 1990.

Before he was an all-time great Celtic, Hondo starred and won a championship for the Ohio State Buckeyes in 1960. Hondo would go on to replicate that success in the NBA eight more times in Boston. He finished his career as a 13-time All-Star and the leading scorer in Celtics history. Oh, and he also made one of the truly iconic plays in all of NBA history:

Seriously we did not mean to put this many Celtics on one list but it just happened. Walton won an NBA title with the Portland Trail Blazers in 1977 and the Celtics in 1986. That later version of Walton was a remarkably rejuvenated one, playing 80 games and starring as a super-sub for K.C. Jones.

Yet Walton’s true dominance came before, when he dazzled at UCLA, winning back-to-back championships in 1972-1973. Until the middle of his senior year, Walton didn’t even lose a game at UCLA, as he and the Bruins compiled two-straight 30-0 records. He is one of the greatest players to ever play for that program, which is saying a lot, given how many NBA players they’ve churned out.

Johnson’s NCAA title sparked the beginning of Magic and the beginning of one of the greatest feuds-to-friendships in the history of basketball. Magic’s Spartans defeated Larry Bird’s Indiana State Sycamores in the title game, one billed as a fight between two of the greatest players at the time but never lived up to the hype. Magic and Bird both went pro the next year, and rejuvenated the NBA with their heated rivalry. Every Lakers/Celtics game was must-see TV as the two teams battled back and forth for league supremacy. Even though he and Bird are now best friends, he never fails to remind Bird that he still won their first matchup.

Magic revolutionized the point guard position on his way to five NBA titles. The NBA had never seen a point with such size, agility and vision all in one package. He was the archetype of the positionless revolution decades before it would happen.

Yes, somehow, the greatest player of all time is only third on the list. How is that possible? Well, it’s certainly no slight for His Airness. Jordan compiled a stellar collegiate career at North Carolina, famously hitting that baseline jumper that won the game and championship for the Tar Heels in 1982. That was only the beginning of Jordan’s ascendance, of course. He’d go on to win six NBA championships, amongst a host of other individual awards, on his way to being widely-accepted as the best to ever play the game. And yet, since this list is about the combined college and professional legacies, he falls just short of the next two players.

Our last Celtic on the list is also the best Celtic, and indeed one of the best players, of all time. Russell redefined not just his position, but basketball in general. He was the ultimate team player, a paragon of selflessness whose game unlocked the potential of his teammates. As if winning two titles with the San Francisco Dons wasn’t enough, Russell would go on to win 11 NBA titles, ushering in an era of complete dominance the NBA really hasn’t seen since

As stellar as Bill Walton was at UCLA, even he couldn’t hold a candle to Lew Alcindor, who would later change his name to Kareem Abdul-Jabbar. In college, Kareem won back-to-back-to-back championships, hurdling every obstacle in his path and simply outclassing the competition. He also garnered National Player of the Year honors  three times and was named the NCAA tournament’s most outstanding player three times. The best things come in threes, and Kareem was the best of the best.

In the NBA, Kareem only continued his rampage. He won six titles, the first coming in 1971 with the Milwaukee Bucks, and the second coming nine years later with the Lakers. Think about that for a second. Most careers don’t even last nine seasons, and Kareem’s was really only getting started at that point. As if that wasn’t enough, he also won six MVP awards and was a 19, yeah, 19 time All-Star.