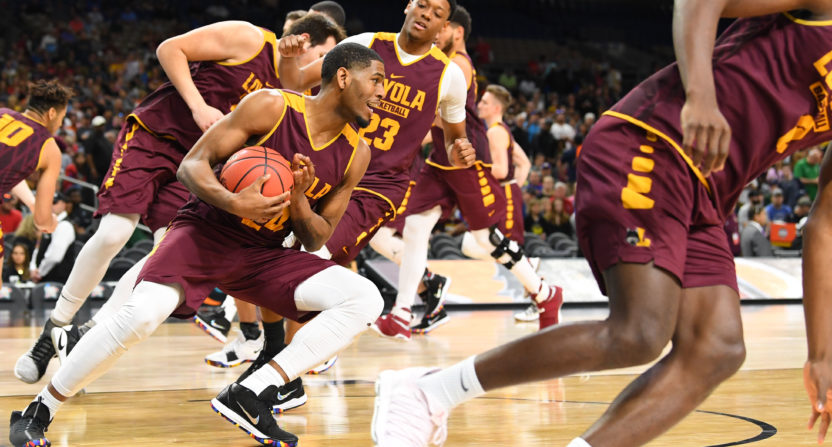 This year’s Final Four promises two intriguing games, though they’re intriguing for different reasons. On one side, there’s the Loyola Ramblers, the best underdog story in recent memory. (And also Michigan.)

On the other side of the bracket, Villanova and Kansas face off as 1-seeds, a matchup of more traditionally powerful programs and high-end talent that promises to be some exciting basketball. This is good, and Saturday night should be a lot of fun. But then what? People often remember a tournament disproportionately based on the quality of the championship game. If it’s a great one, that’s obviously good! But if it’s bad, it tends to be anticlimactic.

(And if it’s terrible, people just pretend it didn’t happen. Like when UConn beat Butler in the 2011 brick festival. That happened. Don’t look it up, your eyes will melt.)

So which matchup should we be hoping for on Monday night? Here’s the order, based on a mix of on-court and off-court factors.

This isn’t meant as a slight to either team, of course. All four of these potential games are fun, and if they played, it’d be a high-energy game between two well-coached teams. John Beilein would also be gunning for his first national championship; he’d previously taken the Wolverines to the title game in 2013, where they lost to (redacted.) Villanova this year is another Jay Wright Villanova squad; they kind of run together in their particular brand of consistent excellence.

Also this is the game my mom predicted, so she’d be thrilled to see it.

It’s been 25 years since the Fab Five’s Final Four, and had Kansas beaten North Carolina in the Final Four that year this would be a rematch of the championship game. (Had Kansas pulled that off, we might also have avoided the Chris Webber timeout technical, and maybe Michigan would have won. Though they’d have had to vacate it anyway.) Kansas is solid, Michigan is solid, it’d be a high-level game, and that’s about it.

The Ramblers are awesome. Sister Jean is great, of course, despite what some idiots would have you believe. But they’re much more than that. The Missouri Valley darlings play a ridiculously good brand of basketball, and while it’s not the highest-octane offense in the tournament, it’s clinically effective.

They execute so well on both ends of the floor that a win over Michigan is certainly not out of the question. And a matchup against Villanova would be a lot of fun, especially given both teams play a relatively similar style. It could easily be number 1 here.

But it’s not, because Loyola against Kansas is as close as we’ll get to the biggest underdog we’ve seen in some time, and they’ve combined that with a few of the more memorable moments of the tournament as a whole.

Kansas is the most traditional power remaining, though they don’t bring with them the same connotations as, say, Duke did when they played Butler in 2010. (In fact Kansas saved us from another Duke title, so that’s something to be thankful for.)

Loyola-Kansas is the game to hope for. But you really can’t go wrong.