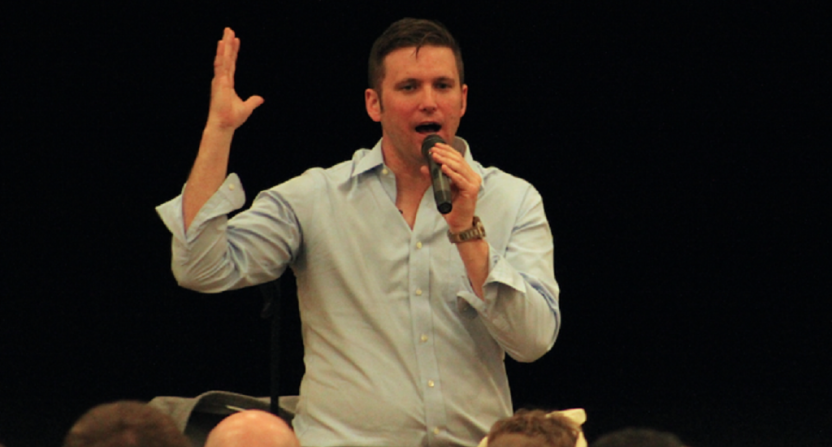 While we do tend to refrain from getting caught up in traffic at the intersection of sports and politics, there are times when we simply have to address some issues. On Tuesday night, with Auburn University hosting white supremacist Richard Spencer for a speaking event, the man who was once sucker punched in the face on the street was bound to say some controversial things. He did. It also just so happened Spencer at one point used his views on race to suggest football should be banned.

Ohhhhhhhh boy, now we have really crossed the line.

Spencer’s comments be shared at Auburn in the state of Alabama is a bit ironic to those who dabble in college football history. Once upon a time, the iconic Paul “Bear” Bryant shared somewhat similar views on African-American football players. He would not sign them to play football for his football teams, including Alabama. That all changed after a game against USC in 1970.

The Trojans played a starting backfield of all black players and came out of Alabama with a dominating 42-21 victory over the mighty Crimson Tide. Consider this the moment Bryant was woke, if you will. It was at that point in time, Bryant changed the way he thought about who could play on his team, and soon enough Alabama was integrated. It is now a program that has two Heisman Trophy winners, and both are African-Americans as well; Mark Ingram Jr. and Derrick Henry.

College football has been integrated for decades now, and the sport has become better because of it. If Spencer is serious about wanting to ban football because white guys play with black guys, then he would be just as happy shutting down the entire sports world too I suppose.

Honestly let's let him speak at every SEC campus just to see how badly it goes for him https://t.co/lZKzZyTFr8

I’d love to see how that goes over. Anyway, let’s go back to that punch video. Here are two of my personal favorites…

I made one of those Richard Spencer videos. pic.twitter.com/ToudvGAPhW