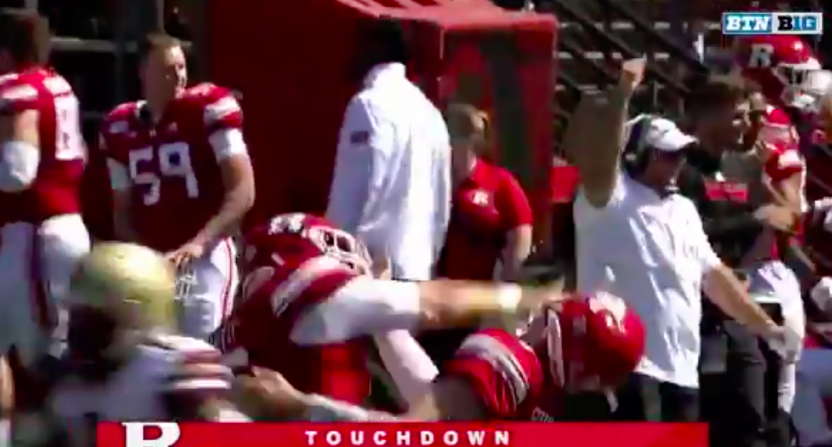 To be fair, you can’t expect Rutgers football players to be very clear on the proper way to celebrate touchdowns. They don’t get to do it all that often. Hopefully, they’ll improve on today’s results.

Saturday’s game between the Scarlet Knights and Boston Eagles wasn’t exactly high on many people’s watchlist, but it was an important contest for both teams as they attempt to make something out of their disappointing starts to the 2019 season. Boston College is coming off a brutal loss at home to Kansas (KANSAS!) while Rutgers recently got eviscerated 30-0 by Iowa in the start to what will probably be another very bad Big Ten season. Something, as they say, had to give.

Early on, it looked like it might be Rutgers’ day. Down 7-0, quarterback Artur Sitkowski hit running back Raheem Blackshear for what quickly turned into a 74-yard touchdown play.

Overcome with excitement over the big play, Rutgers center Michael Maietti ran to his QB and lifted him up into the air in celebration. He then…punched him really hard in the head. Thankfully, Sitkowski was wearing his helmet.

Related to that noggin-knocker or not, Rutgers didn’t return to the endzone for the rest of the day, settling for three field goals. Meanwhile, BC started racking up the points en route to a 30-16 victory.

When asked about it after the game, Sitkowski understandably had a hard time remembering exactly what happened.

“Man, I don’t even really remember what happened.”

When asked if it felt like a hard hit, Artur responded, “I don’t know.” Not a great sign!

Rutgers had a long, tough road ahead in the Big Ten. We don’t want Art to get knocked in the head anymore, but if it does happen, at least we’ll assume it’s going to come from the opposing team.