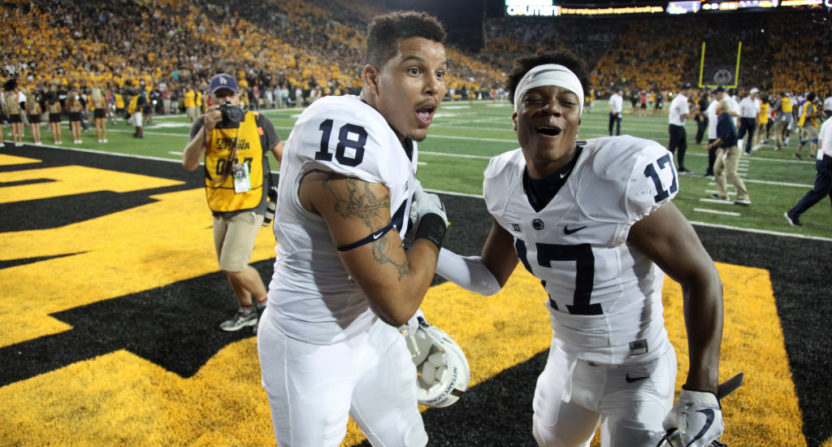 Go back to the 1994 season and any Penn State fan will tell you the exact moment when a chance at an undefeated season and possible national championship truly became a reality. It was not the 63-14 blowout of Ohio State. It was not the road win in Ann Arbor. It was “The Drive.” In a  21-0 hole early on the road against a tough Illinois defense, the star-loaded Penn State offense slowly clawed their way back to a victory to preserve their undefeated season and keep Penn State in the driver’s seat for the school’s first Big Ten championship.

Fast forward 23 years to Saturday night in Iowa City, and Penn State was back in a similar situation. In fact, this game may have been better, even though it came earlier in the year.

Down 19-15 with 1:42 to play, Penn State needed to travel 80 yards for a touchdown against an Iowa defense that made nothing easy all night despite the box score showing a decisive advantage in total offense for the Nittany Lions. Iowa had just taken the lead on a quick three-play, 80-yard drive following a missed field goal by Penn State deep in the Iowa end of the field. What could have made for a near-fatal blow for the Hawkeyes instead sparked life, and Akrum Wadley broke free for a 35-yard touchdown scamper to stun the Nittany Lion faithful.

But Penn State got to work from their own 20-yard line to put together what must be considered this generation’s version of “The Drive.” Trace McSorley and Penn State’s receivers could not have picked a better time to start making plays after largely being knocked off their game by Iwoa’s defense all night.

Penn State had to convert a fourth down and two from their 40-yard line. Mcsorley completed a pass to Saeed Blacknall, his first catch of the night, for six yards and a first down. McSorley’s offense then rattled off back-to-back first-down plays with McSorley running for a 12-yard gain and then completing a pass to Juwan Johnson for an 18-yard gain. Then a pass to Saquon Barkley turned into a 14-yard gain, and all of a sudden Penn State was at the Iowa 10-yard line with 15 seconds to play. This play by Barkley would loom large because he once again showed the ability to tack on offensive yards almost out of nowhere. More importantly, he managed to stop the clock.

First and Goal from the Iowa 10-yard line. Eleven seconds to play. Down four. It’s the situation you dream of in the back yard, but McSorley, Barkley and Penn State were no longer kidns in the backyard. They were looking to win a hard-fought game on the road where national title dreams had come to die. And somehow, on fourth and goal from the Iowa seven-yard line, Penn State won it.

Penn State had been on the other end of this situation before, with Chad Henne hitting Mario Manningham in Ann Arbor. They had been stunned by Iowa on the last play of a game in Kinnick Stadium. But on Saturday night, the ending was different, and Barkley played a huge role in it despite not having a touch in the final four plays of the game with the game on the line.

Barkley played like the Heisman Trophy candidate he is widely considered to be, and Penn State needed the Heisman-esque performance in this one. Barkley may have only scored one touchdown, but he carried the ball 28 times for 211 yards and led all players with 12 receptions and 94 receiving yards. Throw in 53 kick return yards and it is becoming less and less possible to think he is not the best player in college football.

We’ll see where Penn State goes from here, but they answered their first road test of the year with a win, and a last-second two-point win counts as much as a 30+ point victory in the win column. And great teams find ways to win these types of games. Penn State will have more challenges to come and opportunities to prove if they deserve to be called great as the season goes on (Michigan, at Ohio State being the two most notable games to come next month.) But they proved they are capable of responding when backed up against the wall.

Whatever happens with Penn State’s schedule, the most shocking upset after four games would be if Barkley is not heading to New York City as a Heisman Trophy finalist.