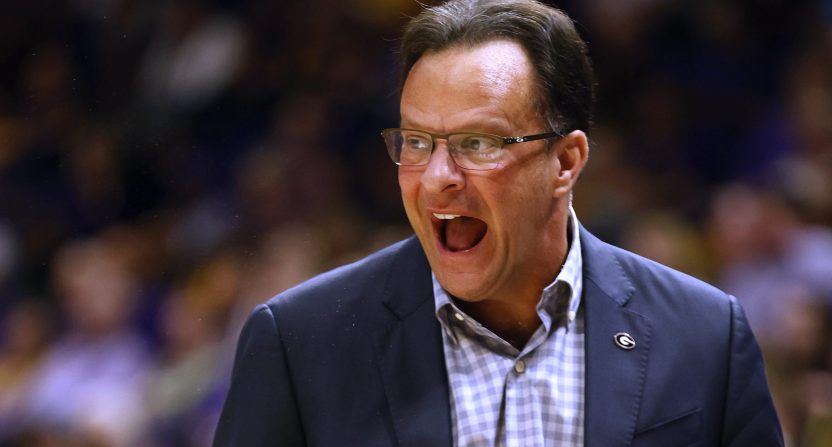 The 2021-22 college basketball season is tipping off. Here’s a look at six major-conference coaches in need of big seasons:

Preseason poll prediction: 12th out of 15

Aging native New Yorkers going South to retire in Florida is a cliché. So, we made jokes when then-62-year-old NYC-born Larrañaga was a surprise hire a decade ago. Turns out the joke was on us. For a while, Larrañaga made the Hurricanes relevant, squeezing out an ACC title and a pair of Sweet 16 appearances. For a football-first school, like Miami with no basketball tradition to speak of, this was huge.

Larrañaga is 72 now, and the program has lost momentum with three straight losing seasons. Larrañaga hasn’t given any indication that he’s ready to call it quits, even as fellow septuagenarians Roy Williams and Mike Krzyzewski have accepted retirement. Heck, Larrañaga isn’t even the oldest coach in the league. Syracuse’s Jim Boeheim turns 77 next week. Still, you must wonder if the shot clock is running out on Larrañaga’s career. The Canes will need a major boost from key freshman guard Wooga Poplar.

Preseason poll prediction: 8th out of 11

Greg McDermott isn’t necessarily on the hot seat. Heck, the program is coming off its first Sweet 16 appearance since 1974. But when you consider what happened earlier this year, he needs as much positive press as possible. First, there were his tone deaf “stay on the plantation” remarks in March. Those racially insensitive words led to the school suspending McDermott. Those comments also led to TyTy Washington decommitting from Creighton (he signed with Kentucky). And if that wasn’t bad enough, the Bluejays were hit with NCAA sanctions as a result of the FBI investigation of corruption in college basketball.

That’s a lot for any coach to deal with, but McDermott has turned the Bluejays into a regular Big East contender. This season could be challenging after losing all five starters. Even without Washington, they do have the Big East’s top incoming recruiting class. Look out for power forward Arthur Kaluma.

Preseason poll prediction: Tied for 12th out of 14

Remember when Chris Collins was the toast of Chicago? He’s the coach who finally got Northwestern to their first-ever NCAA Tournament. The 2016-17 season was the breakthrough. The Wildcats even won a game, defeating Vanderbilt before losing a close one to top-seed Gonzaga, the eventual national runner-up. Collins was so celebrated that there was speculation that he might one day replace Krzyzewski at Duke. Life comes at you fast.

Northwestern started last season 6-1 with victories over Michigan State and Ohio State before collapsing with a 13-game losing streak. Collins has had only two winning seasons and one postseason appearance. What’s worse? There’s a new athletic director in town as Derrick Gragg replaces Jim Phillips, who’s now the ACC commissioner. New athletic directors love to bring in their own guys. Collins does have some experience returning, so guys like senior forward Pete Nance could help the Wildcats surprise.

Preseason poll prediction: 9th out of 10

Believe it or not, Bruce Weber has been at Kansas State longer than he was at Illinois. Weber seemed like a solid fit with the Wildcats. A guy who could keep the momentum going that Frank Martin started. Weber has enjoyed some decent moments, including a stunning trip to the 2018 Elite Eight. But that’s starting to look like a fluke. Outside of that season, he hasn’t won an NCAA game. And since guiding Kansas State to a share of the 2019 conference title, the program has endured consecutive losing years.

It was interesting that athletic director Gene Taylor brought Weber back. Perhaps he surveyed the landscape and didn’t see a viable replacement ready to take over. Also, money might have played a factor. Weber’s buyout drops to “only” $1 million after this season. The Wildcats brought in help with transfer guards Mark Smith (Missouri) and Markquis Nowell (Arkansas-Little Rock).

Preseason poll prediction: 11th out of 12

Whenever, if ever, the Jim Boeheim era ends at Syracuse, his former top assistant Mike Hopkins will be a candidate. He’s one of the most respected minds in the game. However, it’s alarming to see how quickly things have imploded. Hopkins got off to a good start in his first two seasons, going 48-22, including an NCAA Tournament victory. He was the 2019 Pac-12 Coach of Year after winning the league.

Preseason poll prediction: 14th out of 14

Tom Crean’s winning percentage at Georgia is .456. That’s considerably worse than the guy he replaced, Mark Fox (.551). Crean had his first winning season last year (14-12) and the Bulldogs were 12-5 at home. But this season, he needs to show improvement. Georgia athletic director Josh Brooks was hired in January, and he’s going to take the full season to assess the state of the program. The fact that nine players entered the transfer portal isn’t a good sign.

Crean needs his newcomers to contribute immediately. Jabri Abdur-Rahim’s name might sound familiar. The ex-Virginia forward is the son of former NBA star Shareef Abdur-Rahim. The younger Abdur-Rahim played sparingly as a freshman but was a top-50 recruit. Guard Aaron Cook, a Gonzaga transfer, is an experienced winner after playing for the NCAA Tournament runner-up. Former Florida Atlantic forward Jailyn Ingram is another transfer to watch.