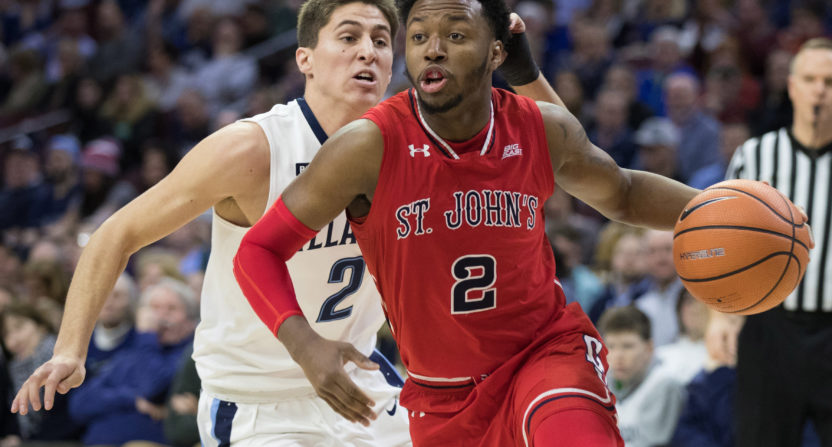 Just put St. John’s in the NCAA Tournament. Forget the losses to DePaul and Georgetown which served as the lowlights of a treacherous 11-game losing streak to begin Big East play. Following up Saturday’s thrilling win over No. 4 Duke at Madison Square Garden, the Red Storm hit the road on Wednesday as 21-point underdogs against No. 1 Villanova and escaped with a 79-75 win.

OK, so the NCAA Tournament talk is overzealous. St. John’s is still just 12-13 and 1-11 in the Big East, even though it has two of the most impressive wins in college basketball this season. The Johnnies won’t go dancing without winning the Big East Tournament.

However, depending on how the next month shakes out, it’s very possible the Red Storm will be the only team with wins over two No. 1 seeds come Selection Sunday. Prior to Wednesday’s game, Villanova was the projected overall No. 1 seed in The Comeback Bracketology while Duke was a solid No. 2 seed.

Star sophomore guard Shamorie Ponds dropped 26 points on Villanova after pouring in 33 against Duke, and Arizona transfer Justin Simon has continued to emerge as a do-it-all, positionless threat. The Johnnies may not make the NCAA Tournament, but they have the opportunity to play spoiler in the final weeks of the season if they continue playing at such a high-level. They still play Marquette, which sits squarely on the bubble after its own big win at Seton Hall on Wednesday, twice in addition to single matchups with Providence, Butler and Seton Hall, all of whom are in somewhat comfortable position right now for the postseason but will be fighting to solidify their bids and improve their seeding.

From Villanova’s perspective, there’s not a ton to worry about after this loss. The Wildcats were without starting forward Eric Paschall due to a concussion, and they shot an uncharacteristic 8-for-33 (24.2%) from three, well below their season average of 41.8%.

Coach Jay Wright told media Paschall will be out at least a week, and a long-term absence could become a problem for a Villanova team that’s already stretched thin with injuries to guard Phil Booth and forward Jermaine Samuels. But still, without taking any credit away from St. John’s, if Villanova shoots just slightly closer to its average from beyond the arc, it escapes with a win. The Wildcats will be fine.

But after a month of Villanova’s reign, we will have a new No. 1 in college hoops. As long as No. 2 Virginia takes care of business against Virginia Tech on Saturday, the Cavaliers will take over the sport’s top ranking next week.