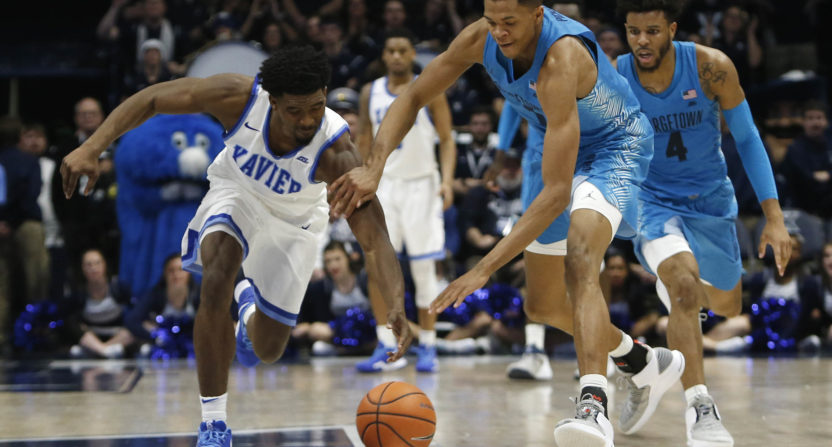 This past weekend in college basketball was kind of tame by this season’s standards, but that’s not saying much. It was still totally insane.

We saw St. John’s snap an 11-game losing streak against No. 4 Duke, knocking the Blue Devils off the top seed line and allowing room for Xavier to take their place. In other parts of the country, Oklahoma State was one of several bubble teams to notch a quality win by upsetting Kansas, also tightening the Big 12 title race in the process.

With less than five weeks until Selection Sunday and under three weeks until the Atlantic Sun kicks off conference tournament season, here’s a look at how the bracket shapes up. The bracket holds 32 automatic bids for conference champions (noted with italics), and the remaining 36 are at-large selections. Teams are evaluated by how they have performed to this point in the season without projecting how they will perform the rest of the year, but conference champions have been selected using KenPom projections.

Here’s the full field of 68 through results of Feb. 5 with analysis on the bracket and the bubble below: 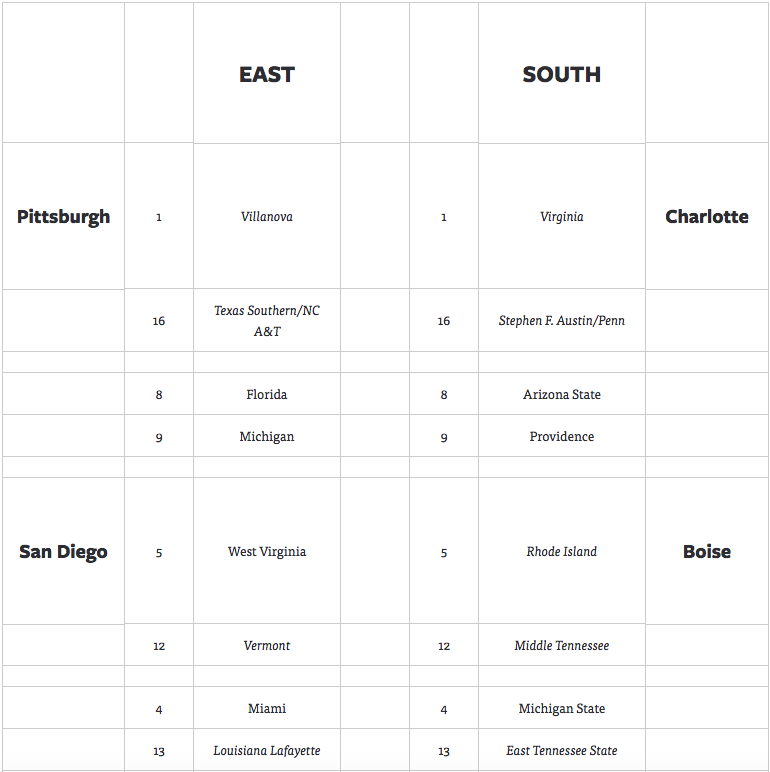 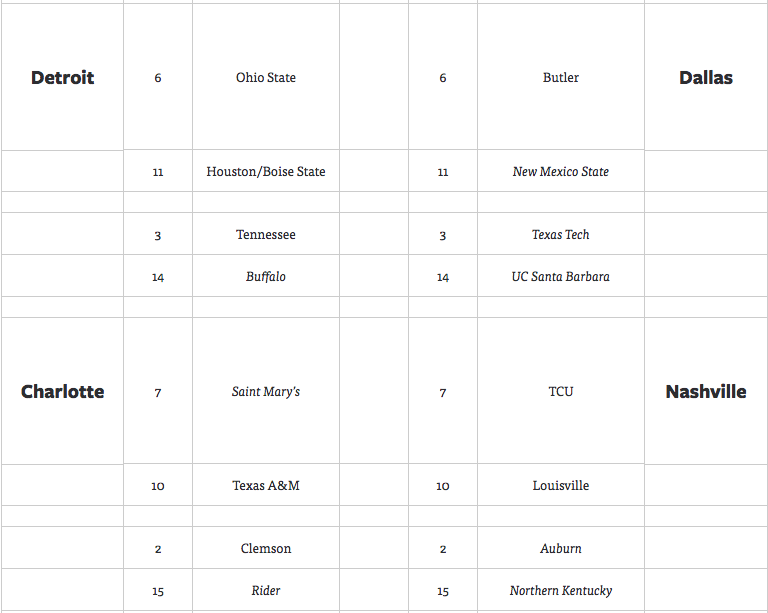 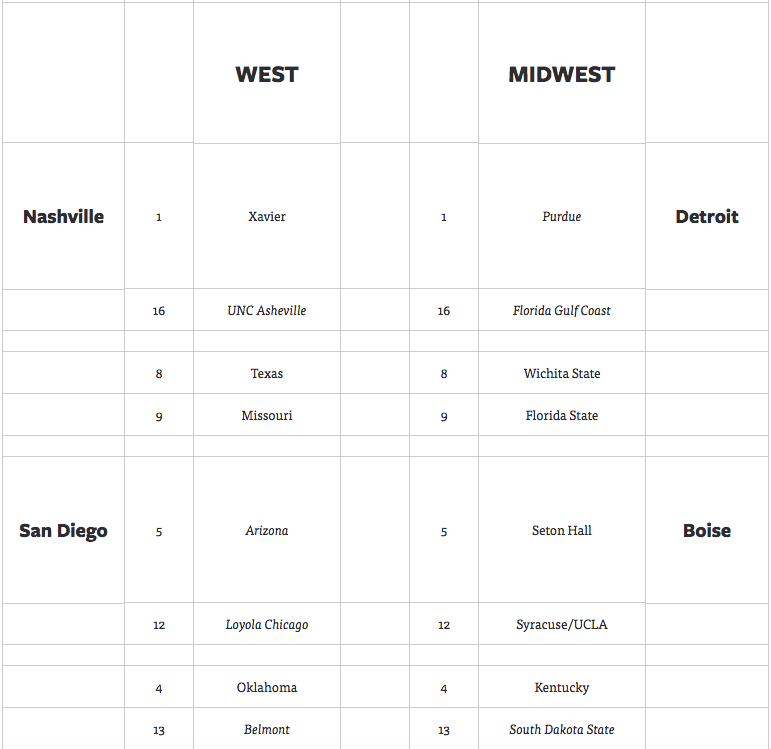 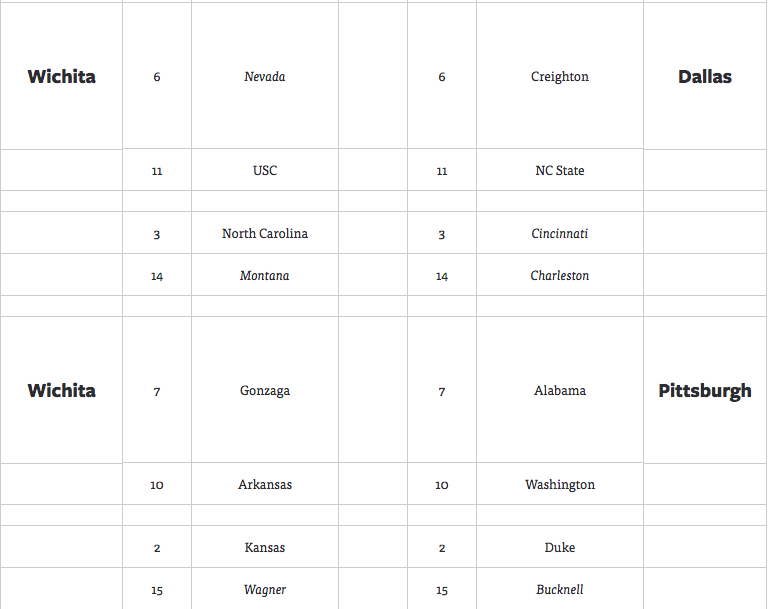 UCLA (No. 12 seed, Midwest) is back in the picture for the first time in a while after knocking off USC this past weekend. The Bruins have taken their lumps, but Saturday’s win along with victories over Kentucky and Washington are enough right now. Syracuse (No. 12 seed, Midwest) was out of the bracket until a huge win Monday at Louisville, the Orange’s first Group 1 win of the year, inched them ahead of Kansas State (first team out).

** Washington (No. 10 seed, Midwest) is the biggest surprise at this point of the season. The Huskies are ranked No. 37 in RPI with a 4-3 record against Group 1 teams. They’re coming off a huge week with wins over Arizona State and Arizona, but they’ll have to stay hot as they enter a stretch that brings many opportunities for bad losses and few opportunities for impressive wins.

Five of their eight remaining regular season games are against Group 3 or Group 4 teams. It’s a good time to point out the Huskies are only ranked No. 89 in KenPom. Will they fall back to earth?

** Despite all the hubbub about moving to a stronger conference, Wichita State (No. 8 seed, Midwest) could wind up in a very familiar position on Selection Sunday. The Shockers are 17-5 overall and ranked No. 20 in KenPom, but they’re still searching for a marquee win.

The Shockers won’t be in any trouble regarding selection unless they slip up a few times against the American bottom feeders, thanks to a 9-2 record against Group 2. But their 0-3 record against Group 1 will make it difficult to get a seed that reflects their talent and KenPom ranking.

You may remember the Shockers were a No. 10 seed last year despite entering KenPom ranked No. 5 overall at the start of the tournament. The year before they played in the First Four as a No. 11 seed despite ranking No. 12 in KenPom.

This could end up being a moot point if the Shockers finish strong, as they still have three more Group 1 games — a home-and-home with Cincinnati, and a rematch at SMU.

** Michigan (No. 9 seed, East) is fortunate to still hold a fairly comfortable spot in the bracket. The Wolverines have played with fire over and over again in home games against non-tournament teams, but keep eking out wins. Most recently, they held off Minnesota in overtime. They may need some of that magic on the road this week when they travel to Northwestern and Wisconsin, who are nowhere near the bubble but have been playing some better basketball as of late.

** Just last week, I wrote about six mid-majors (other than Gonzaga) who could earn at-large bids if they lost in their respective conference tournaments. That list has shrunk with Loyola Chicago’s loss to Bradley last Wednesday and Western Kentucky’s loss to UTSA on Saturday.