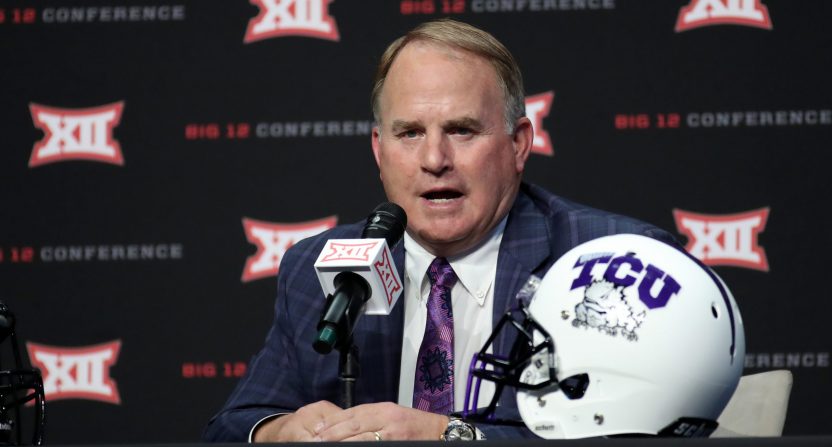 On Monday, TCU linebacker Dylan Jordan tweeted an extended post that accused head coach Gary Patterson of using the N-word around him. As a result, Jordan revealed that players refused to practice this morning. According to him, Patterson went to the locker room and clarified that he wasn’t calling Jordan a (N-word). During Patterson’s explanation, Jordan accused Patterson of using the actual word a second time while Patterson was explaining himself.

I only speak the truth…….. #BLM pic.twitter.com/7YpY6JvjgM

After Jordan’s tweet, other TCU players posted their own account of what happened. And while it seems there’s a consensus it was actually said, the context of how the word was used caused a debate on what the team should to do next.

Wide receiver Derius Davis tweeted that Patterson didn’t call anyone the N-word and other players tweeted similar things supporting that statement. Tight end Artayvious Lynn expanded further, saying that Patterson was telling Jordan to “Stop saying the N-word in meetings.” And then Patterson clarified by saying Jordan was saying that word, using the actual word. Jordan never said Patterson called anyone the N-word, just that he had said it twice. So even though some players are accusing the media of misinterpreting things, it seems some of the players are doing the same thing.

Bruh the man said “stop saying n- word in the meetings” Dylan said “what” Coach p said “you’ve been saying “niggas” in meetings not “you nigger” NOW…..the word shouldn’t be used in any form or fashion but Dylan WRONG for making it seem that way…shit is soft of you son !!!!! https://t.co/dzpdciKDot

Lynn revealed that the reason players didn’t practice was to have a discussion and figure out how to move forward instead of it being some sort of boycott.

I never stated that the word was okay to use. We as a Team discussed this already on how unacceptable it was to say the word period and decided not to practice to think of ways to move forward. We stood with Dylan about this all the way but shit getting twisted.

The argument among players seems to be if there’s a difference in calling someone the N-word or if it’s said as a means to clarify something. Players like Lynn make it clear that the word itself shouldn’t be used under any circumstances, but the reaction and the fallout from Patterson saying that word as a means to clarify what Jordan was saying probably shouldn’t be as severe as if he had called someone that word.

Social media, and the echo chamber that social media provides, can be the best and the worst place to handle racial situations. Yes, it’s a platform that can raise attention and awareness to millions of people and maybe bring about positive change, but it’s also easy for things to be intentionally or unintentionally misinterpreted that makes the situation worse. Dylan Jordan didn’t say that Gary Patterson called him, or anyone else, the N-word. But whether it’s the players, the media, fans, or the general public, a lot of people are misinterpreting the original post, even from those who are accusing others of misinterpreting things.

Just, as a general rule of thumb, just don’t say the N-word at all. Whatever one thinks, that would’ve prevented all this from happening in the first place.