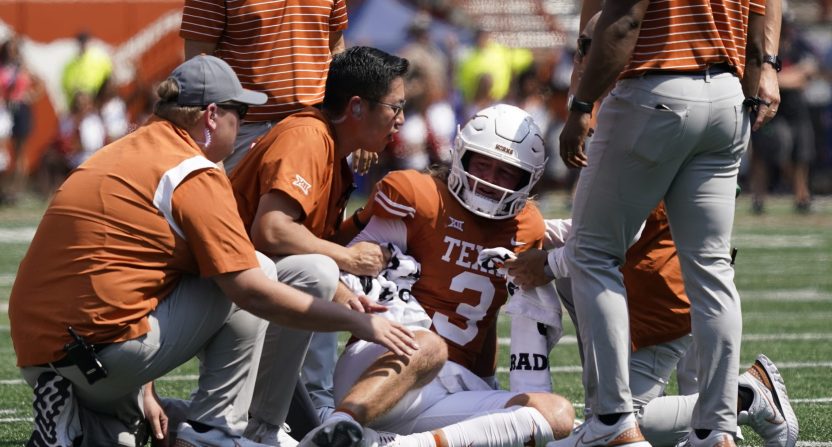 The Texas Longhorns are taking on the No.1 ranked Alabama Crimson Tide Saturday, and were very competitive in the first half. Despite coming into the game as 21-point underdogs, they had the score tied 10-10 at the half.

These two teams last played against each other in the 2010 BCS national championship game. In that game, Texas lost their starting quarterback Colt McCoy to an injury. Unfortunately for the Longhorns, they dealt with a bit of déjà vu in the first quarter of Saturday’s game.

Early on, Texas freshman quarterback Quinn Ewers led two successful drives that resulted in points against a tough Alabama defense. But Ewers wound up injuring his shoulder following a hit  on the one-yard line. That led to a roughing the passer call against Crimson Tide linebacker Dallas Turner.

Quinn Ewers walks off the field after taking a big hit pic.twitter.com/ByzwkrNi8q

Ewers was able to walk off the field on his own power after landing on his shoulder, but did not come back during the remainder of the first half.

Many have taken to social media to express just how unfortunate this injury is for Texas in what has been a very close game to this point.

I hate this for Quinn Ewers and this Texas team. I don't know the outcome of this game or this season, but I loved the spark he was giving this offense. Horns are digging deep today, but this is a gut punch… #HookEm

Crushing injury for #Texas QB Quinn Ewers. You have to wonder if he comes away as injured if the field was natural grass that was absorbing that hit. #BigNoonKickoff #CollegeFootball

That’s a bummer, excellent start to biggest game of early career for @QuinnEwers. A couple or excellent throws and poised early. See if he returns. https://t.co/BYHSMH4Wje

Even after a Texas TD, the crowd feels sapped after that Quinn Ewers injury. Season-long implications

Before the injury, Ewers was having an excellent game in what is probably the biggest game of his football career to this point, completing 9-of-12 passes for 134 yards in the first quarter alone.

Texas will now lean on sophomore quarterback Hudson Card to make an impact for the rest of the game in relief of Ewers. But this brutal injury may have Texas fans questioning how they would have done if Ewers never took that hit.