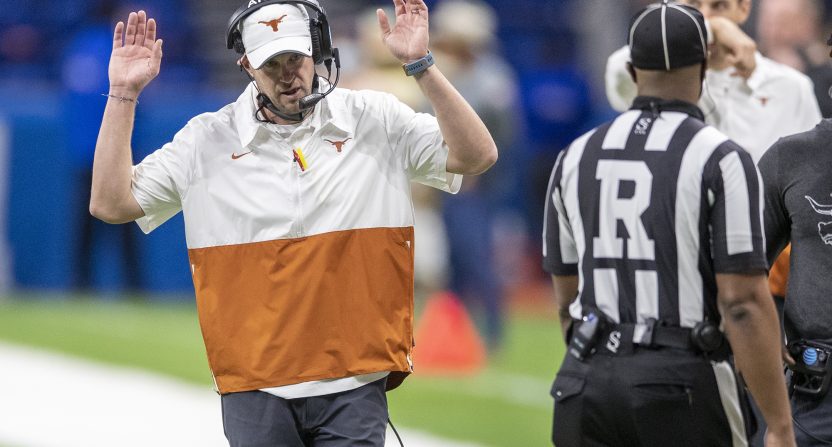 Saturday, the University of Texas announced it was firing football coach Tom Herman after four seasons. Herman went 32-18 and took the Longhorns to four bowl games, results that would have earned him an extension at many other schools. However, the expectations at Texas were simply too high for the school to consider keeping him around.

All of this is to say that the school’s decision to part ways with Mack Brown in 2013 looks worse and worse every year.

Brown “stepped down” that year after an 8-5 season, though it was understood that the feeling was mutual for UT. Brown had led Texas to its best era since the Darrell Royal years of the 1970s. Between 2001 and 2009, Texas won double-digit games every year and became national champions in 2005. Following a 13-1 finish in 2009, the Longhorns took a step back, going 5-7 in 2010, before recovering for a few respectable 8-5, 9-4, and 8-5 seasons before Brown was run out of town.

At the time it felt like the right move to a lot of folks. Brown was getting older and his best Texas seasons seemed to be behind him. However, Brown had also set the bar incredibly high for his replacement. Texas fans weren’t going to settle for someone else to come in and go 8-5 or 9-4. They expected someone to come in and get back to competing for national titles.

Charlie Strong was not that guy. Brown’s replacement lasted four years in Austin, finishing with a winning record only once (ironically the year he was fired). His replacement, Tom Herman, came from Houston where he turned the Cougars into a powerhouse. The assumption was that he could do the same thing with the Longhorns.

The reality is that Herman did get Texas back on track. After a 7-6 star, his Longhorns went 10-4 in 2018 and won the Sugar Bowl. It was a return to form that got UT excited about finally getting back to the level Mack Brown had kept them at for so long. However, Herman’s team took a step back, going 8-5 last year and then following that up with a solid 7-3 run in the truncated 2020 season. While not the results that the “Texas is back” crowd wanted, it still meant Texas was nationally ranked and in the conversation. But again, the bar had been set too high by the guy Texas didn’t want anymore.

Tonight, Mack Brown will coach in the Orange Bowl.

Texas will enter next fall with their third coach in 8 seasons…since they fired Mack.

And like, I dunno, maybe Mack wasn’t the *real* problem in Austin?

Meanwhile, Brown returned to coaching in 2019, taking over at North Carolina, the place he had coached before taking the Texas job. In two seasons at the helm, Brown has helped turn the Tar Heels into ACC contenders, going 7-6 in 2019 and 8-3 in 2020 (with an Orange Bowl berth to boot). While it’s gonna take some work to dethrone Clemson, UNC could be considered one of the most likely teams to be able to do it right now. And Mack Brown is a big reason why.

Odds are good that Texas is going to hire Alabama OC Steve Sarkisian to replace Herman. It sounds like a good hire on paper as Sark has rebuilt his resume following a controversial end to his stint as head coach at USC. His offense at Bama is a juggernaut and he comes in with plenty of head coaching experience.

But then again, Charlie Strong and Tom Herman looked great on paper, too. But neither of them was able to meet the somewhat-unrealistic demands of Texas fans and boosters.  While Mack Brown continues to build another solid program at UNC, Texas continues to search for everything they had with Brown before deciding they could do better. Right or wrong at the time, the last eight years have only strengthened the legacy that Mack left behind in Austin and how Texas might spend another decade trying to find it again.