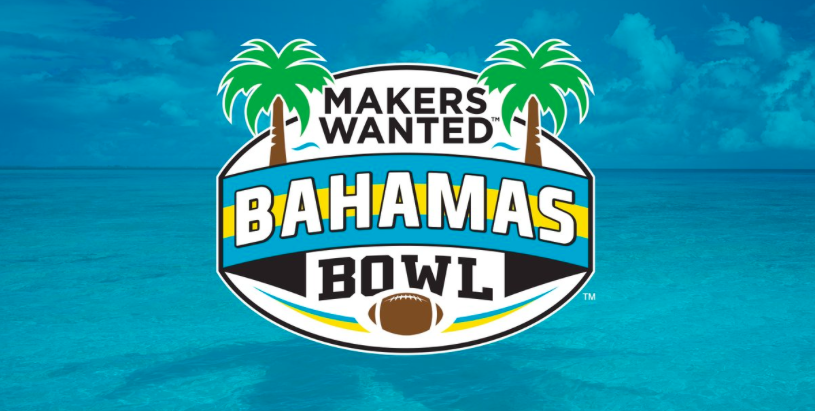 We have seen some truly bizarre college football bowl game sponsors over the years. The kind of strange companies that you didn’t even know existed until they got involved in the ad deal and haven’t heard of since. From AdvoCare V100 to R&L Carriers to Bad Boy Mowers to Cheribundi Tart Cherry, we’ve had some odd ones.

But we’ve never had a bowl sponsor that was literally a place where people live.

Elk Grove Village, which is located close to O’Hare International Airport just outside of Chicago, Illinois, has been announced as the title sponsor of the Bahamas Bowl. You read that correctly, a village in Illinois is sponsoring a college football game that will be played in the Bahamas.

The game will actually be referred to as the Makers Wanted Bahamas Bowl, with Makers Wanted being the village’s business slogan. America, nay, the world, will learn on December 21, 2018, exactly what that means.

“Elk Grove Village is home to the largest industrial park in the United States, spurred by our village’s commitment to being beyond business-friendly,” said Elk Grove Village Mayor Craig Johnson. “Our relationship with the Makers Wanted Bahamas Bowl and ESPN Events is a perfect opportunity to use college football to share our message with the entire country. We were impressed by how the bowl game has been developed in the Bahamas over the past four years, and we share in the excitement that this event brings to their community.”

That’s right, Elk Grove Village is actually better known as a place where people go to work than it is as a place where people live. Over 3,600 businesses are said to be located in its 5.4-square-mile radius, and it’s home to the largest concentration of manufacturers in the Midwest. It is as if a massive office park just decided to promote itself by sponsoring a college football game.  We don’t know exactly what kind of metaphor this is trying to be about the state of amateur athletics and college sports, but it seems to be making a strong one.

Per ESPN, who runs the Bahamas Bowl, this is the first time a non-tourist municipality has ever sponsored a bowl game (so specific!).

So many questions come to mind. What will the Makers Wanted Bahamas Bowl gift bag include? Management software from ADP? Logistical freight coupons? Fiber optic cables? We can only imagine. Also, will players from the Conference USA and the Mid-American Conference teams involved have to make a pitstop in Elk Grove Village before traveling to the Bahamas? We sure hope not.

The good news is, of course, that the sponsorship gives the internet plenty to work with. And some folks are already getting an early start on the action.

The San Francisco Bowl is currently without a sponsor if any of Elk Grove's suburban Chicago rivals want to step up to the plate.

Elk Grove is considered the Bahamas of the Chicago suburbs. https://t.co/SULfvk4Na1