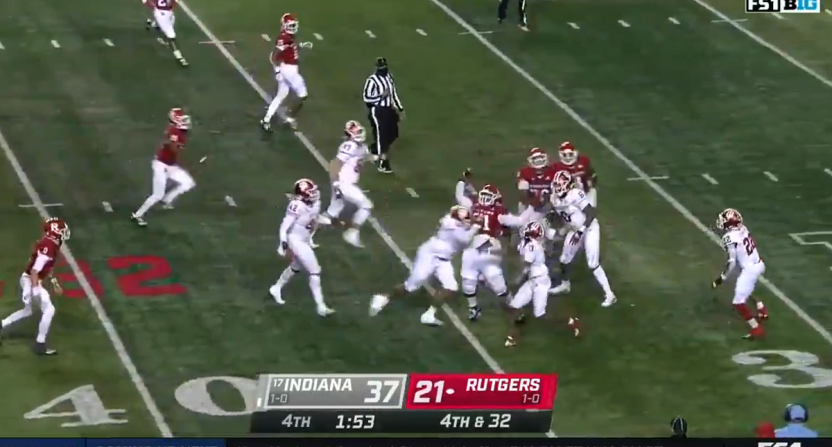 Rutgers and a ranked Indiana playing a late afternoon game on Halloween in Piscataway is a surefire recipe for weirdness.

For most of the game, though, we didn’t really get it; there were plenty of penalties and a few sloppy turnovers, but for the most part the game played to script, with Indiana recovering from a slow first quarter to take what looked like an insurmountable lead.

But, hey, this is Indiana football, which means there’s really no such thing as an insurmountable lead. Five years ago they proved that perfectly against Rutgers, blowing a 52-33 lead in thanks to giving up 22 unanswered points in the fourth quarter.

That meant that even leading 37-21 late, with Rutgers facing 4th and 32 in their own territory, no Indiana fan felt safe. Even so, it would have been impossible for anyone to predict the ensuing play, which featured Rutgers treating it like the last-gasp effort it was even with nearly two minutes remaining on the game clock.

Behold, one of the more incredible lateral plays in a very long time:

Listen, Rutgers probably just deserved that one. Yes, there was a clear ball that traveled forward a yard or so in the middle of all of that, but just look at all of that! Look at it! Even the forward pass was delivered just inches away from being down, flipped underhand while spinning through the air. Just total perfection.

In the end, though, it was called back. Indiana fans, players, and even head coach Tom Allen breathed a huge sigh of relief.

Tom Allen laughing about the lateral play: "When one of the officials told me, 'Coach, we think one of the laterals was a forward pass,' I was like, 'Thank you, Jesus.'" #iufb

The win moves Indiana to 2-0, and looking at possibly moving even further up the rankings (especially given Michigan’s loss; the Hoosiers and Wolverines play this coming Saturday.) But we lost out on the chance to have the kind of viral play that we remember long after we forgot who actually won the game.

Still, even though it didn’t count, it’s going to be memorable in its own right, if only for the offensive lineman chucking it back over his head like a bride throwing a bouquet.

In the end, though, Indiana walked away with a 37-21 victory, and we all got to see a ridiculous highlight, whether it counted or not.