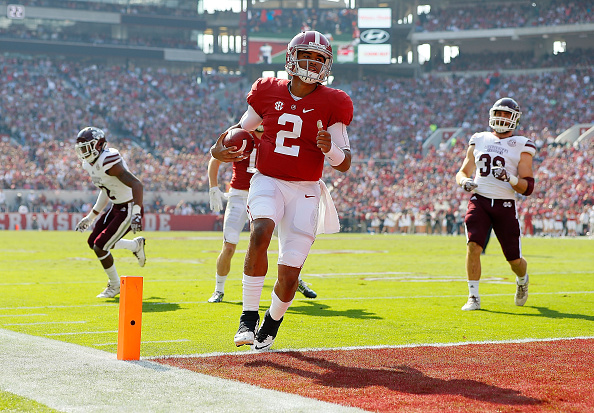 College football is finally here! Well, if you don’t count that whole “Week 0” thing headlined by a game in Australia and Oregon State getting smashed by Colorado State.

We’ve been waiting for this day for several months now, ever since DeShaun Watson led Clemson past Alabama in one of the most thrilling national championship games ever.

The opening week of college football has gotten better and better over the years as more teams beef up their non-conference schedules to improve their early season rankings and (most importantly nowadays) impress the College Football Playoff selection committee with a big, bold W on their schedule.

This week features maybe the best game of those non-conference showdowns in recent memory, lots of inter-conference intrigue, and a couple national championship hopefuls that could be on upset alert. Here are the 10 games you need to watch (all times eastern):

With the opening weekend stretching over the Labor Day weekend, there are games every day from Thursday all the way through Monday. The weekend closes with an ACC-SEC game that carries some importance with two programs desperate for a breakout season of success. Tennessee started great last season, but ended by losing four of their last seven. They also have to find a way to replace stars on both sides of the ball in Josh Dobbs and Derek Barnett. Georgia Tech is trying to build off a nine win season after a really disappointing 2015 campaign. What better way to start the season than enjoying some old-school triple option action?

These two teams played an exciting game in their season opener last year when the Aggies won in overtime at College Station. It might be an unranked matchup, but you’d be hard-pressed to find a game that has more importance for both teams. UCLA QB Josh Rosen is being discussed as a Top 3 pick, but he needs to deliver on the field for the Bruins after a hugely disappointing 4-8 season last year. A&M head coach Kevin Sumlin is under pressure as well. His teams traditionally start fast, going 5-0 for each of the last three seasons, but he needs to maintain that throughout the season in order to get back to the Top 10. If the Aggies don’t get that quick start this year, his seat could start to get a little warm.

If there’s any program who knows about huge early season upsets, it’s App State. While they haven’t yet recreated the magic of their historic victory at Michigan, they’ve turned into a very solid Group of Five program. The Mountaineers are 21-5 in their last two seasons with two bowl victories and last year they took #9 Tennessee to overtime on opening weekend. Georgia is far from immune from an upset here, all you have to do is look at their two point win over FCS Nicholls last year.

It’ll be strange to see LSU start a season without Les Miles chewing grass on the sidelines as Ed Orgeron starts his first full season in charge. This game was moved to New Orleans after being originally scheduled for Houston. All eyes will be on the Tigers, but don’t sleep on the upset potential of the Cougars led by their talented QB Tanner Mangum.

One of just three matchups between ranked teams sees these two neighbors square off in a Sunday night encounter. Put this rivalry along with those who have been put on hold by conference realignment this millennium. The two schools who were once part of the Big East now call the Big 12 and ACC home. Both head coaches could really use a marquee victory to jump start their programs and set the table for the season ahead.

No, this is not a typo. Rather, it could go a long, long way in deciding the Group of Five nominee for this year’s postseason showcase. The Broncos have always seemingly been a part of that discussion while Troy are the new kids on the block. Troy matched App State by going 10-3 last season, even taking Clemson to the limit on the road, and are a Sun Belt favorite this year. A win on the road in Idaho would be a huge step up for a program that seems to be on the rise.

Normally, the “Rocky Mountain Showdown” is nowhere near the list of top college football rivalries. But this year’s game may carry a little bit of extra interest considering the impressive way the Rams smashed the Pac 12’s Beavers last week. Very quietly, the Rams have put together four consecutive winning seasons in spite of Jim McElwain leaving for Florida. They will look to continue their positive momentum against the in-state rival coming off a resurgent season that saw them go all the way to the Pac 12 title game. The Buffaloes have a lot of shoes to fill, especially on defense, and this game may go a long way in seeing how quickly they can reload.

Maybe you’re thinking this game is ranked ridiculously high and that it’s silly for ESPN to give it the championship-level MEGACAST treatment, but hear me out. Indiana has always played Ohio State tough the last few years. Yes, that Indiana. And that’s been especially true when the teams meet in Bloomington. In 2015, the Buckeyes needed a goal-line stand to hold on for a 34-27 win. And even if this game isn’t that close, there’s still the storyline of former Hoosiers coach Kevin Wilson trying to get the Ohio State offense back firing on all cylinders after they were shutout and embarrassed by Clemson in the national semifinals.

Big Ten-SEC games are always going to draw extra attention for north-south bragging rights. And when those games are between traditional powers like the Gators and the Wolverines who are both ranked in the Top 20, they can set narratives and expectations for an entire season. Michigan will have great memories from their 41-7 shellacking of Florida in the Citrus Bowl a couple years ago and the Gators come into this game severely disadvantaged by the suspension of something like 53 players. And they star a freshman at quarterback. However, Michigan has the fewest returning starters of any team in FBS, so it remains to be seen what to expect from the Maize and Blue. Or in this case, the Maize and Maize. 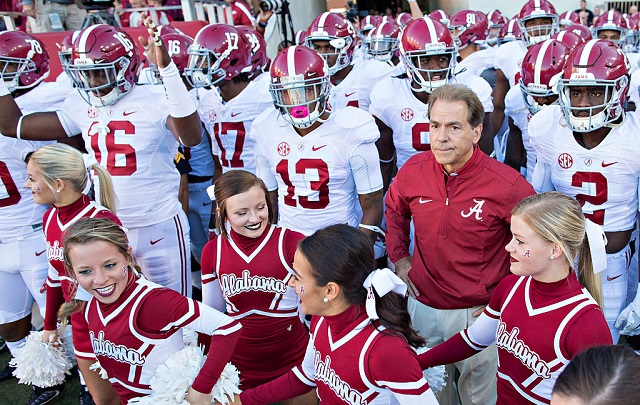 Had you there for a second, didn’t I? Yes, all eyes will be on this matchup between preseason #1 and preseason #3 which most people agree is the biggest season opener of all the times. It has huge playoff implications, more so for FSU than for Alabama.

The Tide always seem to hop to the front of the line, whether undefeated or with one loss and getting through the SEC unscathed is a mortal lock for the Playoff whether they win or lose this game. For the Seminoles, a victory here could make a great case for an at-large berth, whether they win or lose their conference. Bama was heartbroken in the national championship game last year, but with Jalen Hurts returning for his sophomore season he could end up being a leading Heisman hopeful. Florida State QB Deondre Francois was pummeled from pillar to post at times last season, but showed toughness and resiliency. He’ll need that and a lot more to get the Noles past the Crimson Tide.