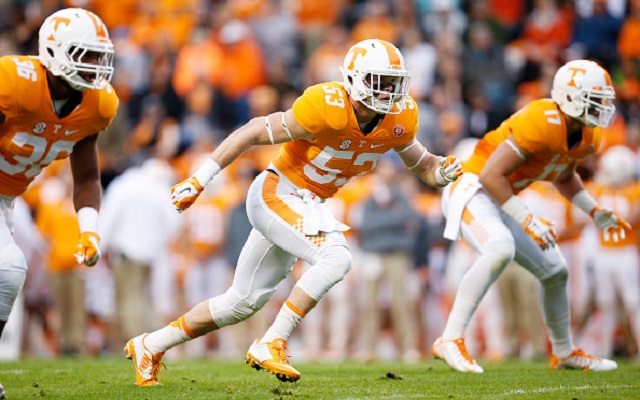 1 Burning Question: Can Tennessee live up to high preseason expectations?

Butch Jones is now in his fourth year as head coach at Tennessee and a lot of the media expects 2016 to be the breakthrough year for Jones and the Vols. For example, Phil Steele has them ranked seventh in his power poll, Athlon ranked them seventh, and Sports Illustrated ranks them eighth. Those are some lofty expectations for a team that hasn’t won 10 games since 2007.

There is a lot of reason for excitement this year. Tennessee has the second-most returning starters in the SEC (behind only LSU). The Volunteers have an experienced senior quarterback and one of the best running back duos in the league. The defense has shown improvement every season under Jones and it actually upgraded at coordinator this offseason with the hire of Bob Shoop. UT’s largest margin of defeat in the 2015 season was by seven points and that was an overtime game.

5 — This is the number of passing plays the Vols had in 2015 that went more than 40 yards, ranking 11th in the SEC. The Vols showed improvement in both total offense and scoring offense in 2015. They also did a much better job on third down, which allowed them to keep drives alive and give their defense more rest. This year, they need to be more explosive, especially in the passing game. They have a very talented receiver group, but that talent has yet to produce at the expected levels.

Why it matters: Florida has an 11-game win streak in this series. Do I need to say more? For Tennessee, the road to the SEC East division goes through Florida. Florida is the first conference game of the year, and the result of this contest will set the tone for the Vols in the SEC.

Why it matters: Tennessee lost a lot of close games last year, but the Georgia game was one the Vols won. Georgia has won five of the last six meetings and will be looking for revenge. Tennessee will be coming off of an emotional game against Florida, and this will also be its first road game of the year (one of only four this year). Nick Chubb will also probably want some revenge for his injury at the hands of the Neyland Stadium turf last season.

Why it matters: Outside of Georgia, this is the second-toughest road game for the Volunteers. This contest also comes directly after Florida and Georgia and the week before Alabama. It’s all about timing here. The Vols could beat Florida and Georgia, but then could lose it right back if they fall to the Aggies and Tide in successive weeks. The final five games of the season is as close to a cake walk as it gets in the SEC. This means that if Tennessee wins big early, Butch Jones will be considered a conquering hero in Knoxville.

Joshua Dobbs, QB – It took Dobbs longer than many thought to win the starting job at Tennessee. His stats are good, but not great. He’s good at running the offense and he generally makes good decisions. A key for Tennessee is if Dobbs can go from good to great in 2016.

Alvin Kamara, RB – Jalen Hurd has been a very good running back for Tennessee, breaking the 1,000-yard barrier last year. Yet Kamara is more explosive and will give the Vols a more dynamic offense if he is given the ball more this season. After a year in the fold, expect a lot more out of Kamara.

Derek Barnett, DE – As a sophomore, Barnett tied for fourth in the league with 10 sacks. As a junior, he will only get better. He could finish the season as Tennessee’s all-time leader in both sacks and tackles for loss.

Jalen Reeves-Maybin,  LB – Barnett is the sizzle, Reeves-Maybin is the steak. He’s a very versatile defensive player that is a tackling machine. He’s the glue that holds the defense together.

Call it hunch, but I think this will be a breakout year for Kamara. Jalen Hurd isn’t going anywhere, and he will have another good season as a solid and dependable runner. Kamara, on the other hand, will force the coaches to keep him in the game due to his explosiveness.

4. Tennessee will finally get the Florida monkey off its back

The last time the Vols beat Florida was in 2004. The streak should have ended in 2014, but by some miracle, it didn’t. It will end this year as the Vols will defend their field against Florida and come away with a hard-fought victory.

Reggie White holds the Tennessee all-time record for career sacks with 32. Derek Barnett has 20 in his two years in Knoxville. Look for Barnett to notch at least one sack per game on average and he will finish the season as Tennessee’s all-time sack king.

As SEC schedules go, this is a pretty easy one for Tennessee. Two of its four road games come against Vandy and South Carolina. Those should be easy wins. The last five games of the season might be the easiest of any major college football team. The key for Tennessee will be not to slip up early and to get through the Sept. 24 through Oct. 15 gauntlet in as good shape as possible.

1. Tennessee will finish second in the SEC East

Tennessee could very well win the SEC East. Many have predicted them to do so. This is a very experienced team that has shown improvement year after year under Butch Jones. The last division title for the Vols came in 2007. They finished 6-2 in the SEC that year. They haven’t had a record that good since 2007, despite the SEC East being down. This year, I expect the Vols to go 6-2 in the conference. Will it be enough to crown them SEC East champs and give them a birth in the SEC Championship Game? I don’t think it will.