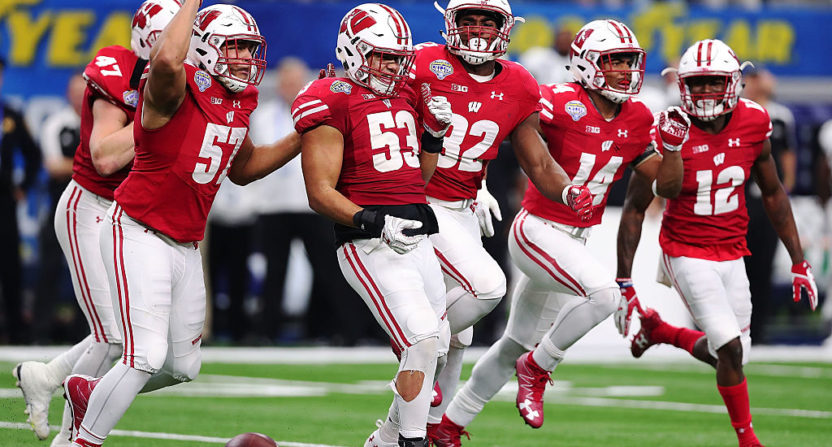 The Comeback’s college football Top 50 countdown has now reached the final 10! As part of our 2017 college football preview, we’re moving up the rankings each day until the kickoff of the regular season. Our trip into the Top 10 begins with the Wisconsin Badgers.

Wisconsin is getting a lot of press heading into this season, almost entirely based on its schedule. Let’s not forget, though, that last year’s team lost only three games, all by one possession, and all to Top 10 teams. Wisconsin was only a few plays away from heading into the Big Ten Championship Game at 12-0 and as the No. 2 team in the country.

The Badgers might be an early dark horse Playoff pick this year because of an easy schedule, but this team is more than talented enough that it should be a Playoff contender even with the same schedule as last year.

Depending on your expectations for Wisconsin, the 2016 season can be viewed as a great success or a “what could have been.” The Badgers started out unranked, but that quickly changed after an opening-weekend upset of LSU. The Badgers lost two nail-biters against Michigan and Ohio State, but those losses did not hurt their ranking at all. A third seven-point loss (to Penn State in the Big Ten Championship Game) cost them a bit, but a Cotton Bowl win capped off a Top 10 finish for the Badgers.

On the one hand, very few expected that before the season. On the other hand, just a few plays going differently could have meant a 12-1 season with a Big Ten title — and very likely a Playoff berth. (And let’s be honest, Wisconsin couldn’t have done much worse in a semifinal than Ohio State did.)

For a program in the Top 10, this might feel like a strange number. But Wisconsin always does things its own way. It recruits the big linemen that can set up its offense, the backfield and receivers that can create the trademark Wisconsin running game, and big Wisconsin linebackers that can anchor a defense.

Sure, the Badgers always could use elite athletes, especially in the secondary, but this program does not need the high-profile recruits that Alabama and Ohio State gets in order to build successful and nationally competitive teams.

1 – Number of times Wisconsin has failed to field a 1,000-yard rusher since 2005. 2015 was an off year for Wisconsin’s offense, between Corey Clement’s injuries and the team’s quarterback woes. Other than that, you have to go all the way back to 2004 to find a year when Wisconsin’s leading rusher was under 1,000 yards. The offense knows its identity and plays to its strengths well. Expect more yards on the ground from Wisconsin this year.

320 – Average weight of Wisconsin’s projected offensive line starters. This number could change a little. After all, players could gain or lose weight, or new starters can emerge during the fall. Still, the point remains. Wisconsin’s line is huge and does its job well. The running game will be efficient and effective. If Alex Hornibrook can develop into a solid game manager, this offense could be nearly unstoppable.

January 1, 2014 – Wisconsin’s last bad loss. This stat is just a fun one. In the last three seasons, Wisconsin has not lost a single game by more than seven points — unless its opponent went on to win the CFP title. In 2014, Ohio State beat Wisconsin by 59 and then won the Playoff. In 2015, Alabama beat Wisconsin by 18 points and went on to win the CFP. Wisconsin’s last two-possession loss to a team that didn’t win the national championship was in the 2014 Outback Bowl, a 34-24 loss to South Carolina. Wisconsin’s last loss by more than 10 points, national champions excluded, is all the way back in 2009.

What does this fun stat tell us? Well, unless it’s against the absolute best team in the country, Wisconsin just doesn’t get blown out. That says a lot about the program.

Wisconsin doesn’t have one. Seriously. The Big Ten West has a lot of parity. Illinois and Purdue are at the bottom of the division, Wisconsin is at the top, and then there are four teams in the middle that could challenge for the division or could finish fifth. During the season, we may be able to see which one of those steps up and is Wisconsin’s challenger, and that will end up being the biggest game of Wisconsin’s season.

Other than that, nothing sticks out above all others. The road trip to BYU is potentially challenging, and Wisconsin gets a tough cross-divisional home game against Michigan. As long as Wisconsin only loses one of those games (at most), the Badgers will still be in line for a Playoff spot if they go 12-1.

It might be presumptuous to say this, but the game that decides whether Wisconsin’s season ends in the Playoff or a New Year’s Six Bowl is probably the Big Ten Championship Game. Sure, this team isn’t perfect, so a loss or two along the way is definitely possible, but the Badgers should be a pretty heavy favorite in enough games that anything less than 12 wins is a disappointment.

Alex Hornibrook, QB: He’s not guaranteed to be the starter, but he showed decent promise last year. Wisconsin doesn’t need him to be an award-winning QB. The Badgers just need a game manager who can throw it well enough and often enough to keep defenses from stacking the box. If Hornibrook can be an effective game manager, this offense will thrive.

Jack Cichy, LB: The defense has a bunch of players who will be standouts and affect the course of Wisconsin’s season. Cichy leads a monster linebacking corps that also includes T.J. Edwards. D’Cota Dixon, a tremendous safety who has just been improving each year, will lead the secondary. The defensive line should be entirely juniors and seniors. This defense should be one of the best in the country this year, and Cichy is absolutely the heart and soul of it.

Bradrick Shaw, RB: We sometimes take it for granted that Wisconsin will run the ball well. There is no real returning production in the backfield, with both Corey Clement and Dare Ogunbowale currently in the NFL. Shaw is now the most experienced running back on the team. I don’t know if it will be him or someone else to step up and become that perfect balance of power back and shiftiness that Wisconsin so often seems to find, but this offense won’t do much without a standout running back.

The Badgers run the table in the regular season. If they meet Penn State in the Big Ten Championship Game, they win. If the opponent is Ohio State, they lose.