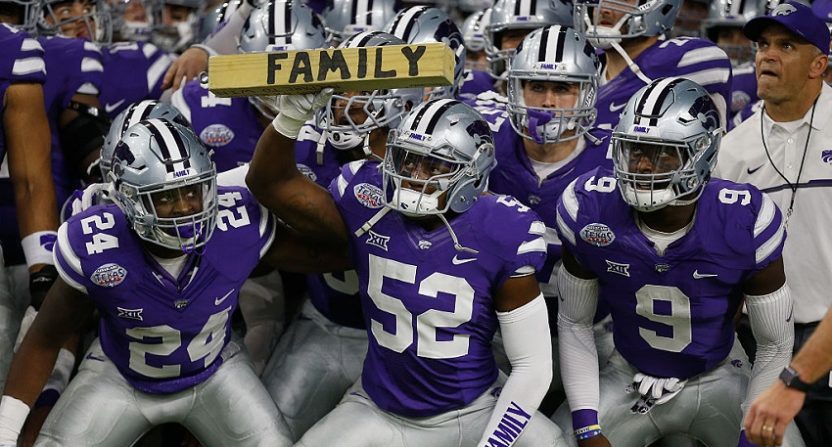 The Comeback’s college football Top 50 countdown continues with a look at Kansas State of the Big 12 checking in.

Everyone’s favorite septuagenarian coach is back for another season after a personally challenging one that saw him battle throat cancer, and this Kansas State squad has higher expectations than any Bill Snyder squad in recent memory. Whereas they were supposed to have a down year last season, the Wildcats wound up winning six of their last seven en route to a 9-4 record. The 77-year-old Snyder is the face of Kansas State athletics, and though ever-present rumors abound annually that he’s winding down for good, that time isn’t now, and KSU could have a big run in them in 2017.

The 2016 campaign was the most Kansas State season ever. Picked by most to be an also-ran in the Big 12 as they had to replace so much talent, KSU does what Snyder teams tend to do … overachieve to the tune of a 9-4 record. The only teams that defeated them finished ranked in the top 20.

Quarterback Jesse Ertz was a revelation, and the offense became one of the most efficient in the country in spite of not being one that piled up yards. They were 9th in total yards in the conference but averaged over 32 points per game while leading the conference in time of possession in spite of being the worst passing offense in the Big 12. The defense was typically nasty, but will have a lot to replace. They finished the season muscularly, piping off six of their last seven games as wins, including one over Texas A&M on their own stomping grounds in the Texas Bowl.

Not surprising to anyone who follows KSU football even from a passing glance, the headliners are JUCO players Da’Quan Patton (LB) and rangy 6’6” pass rushing monster Xavier Davis. With the appropriate holes to be filled on the roster, both will get a chance to be big time players on this roster, quickly.

22.8 – Percent of 2016 total tackles made by since departed linebackers Elijah Lee and Charmeachealle Moore that the Wildcats will have to replace. If there’s a unit on the team that will be a little wet behind the ears, it’s at linebacker. Having that many tackles wrapped up in two players is a lot to replace, especially when the top three returning guys had 25.5 tackles, total last year.

157– The average number of passing yards per game for the 2016 Wildcats, worst in the Big 12 by nearly 84 yards per game. Their record proves that you don’t need an explosive offense to win in the Big 12, but to realize their peak potential, they’ll need to be able to produce more through the air, likely.

219.8 – Best in the Big 12 last year, this was the average number of passing yards allowed by the Wildcats defense. In an offense-happy league, that’s an impressive number. KSU also was the top scoring defense in the Big 12, and these two things are inherently tied together in the wide open conference.

Why it matters: The schedule sets up reasonably well for KSU, with two of the three teams they lost to in the conference visiting Manhattan, and the lower rung of the conference other than Oklahoma State appearing on their road visits. Oklahoma, as per usual, will be a favorite, and this game could prove if KSU has some conference title juju about its 2017 season.

Jesse Ertz, QB – Going into this time last year, there was some unsureness regarding who would be the QB and if they were up to the tough, ultra-responsible task of manning this offense. Well, Ertz was the man for the gig, leading the team with over 1,000 yards rushing. His 57 percent completion rate and meager passing yard numbers will need to improve for them to win the conference.

Da’Quan Patton, LB – The aforementioned Lee and Moore will be tough to replace, but as per usual, Snyder and staff are out here scouring the JUCO ranks for elite talent. Patton will have the opportunity to slide right in and be an impact player at a position that’s looking for experienced players to step up in a program that traditionally has outstanding linebacker play annually.

Byron Pringle, WR – Ninth in 2016 in all purpose yards in the conference in spite of being a wide receiver on the meekest passing team, Pringle is an electric player who’s a threat anywhere KSU tries to move him. With 8 returning starters on offense, he could be the game changer they need to make the offense more explosive.

Kansas State will win at least 10 games and finish no worse than second in the conference, however, because of a weak out-of-conference schedule, will not be considered for a playoff berth even if they go 11-1.